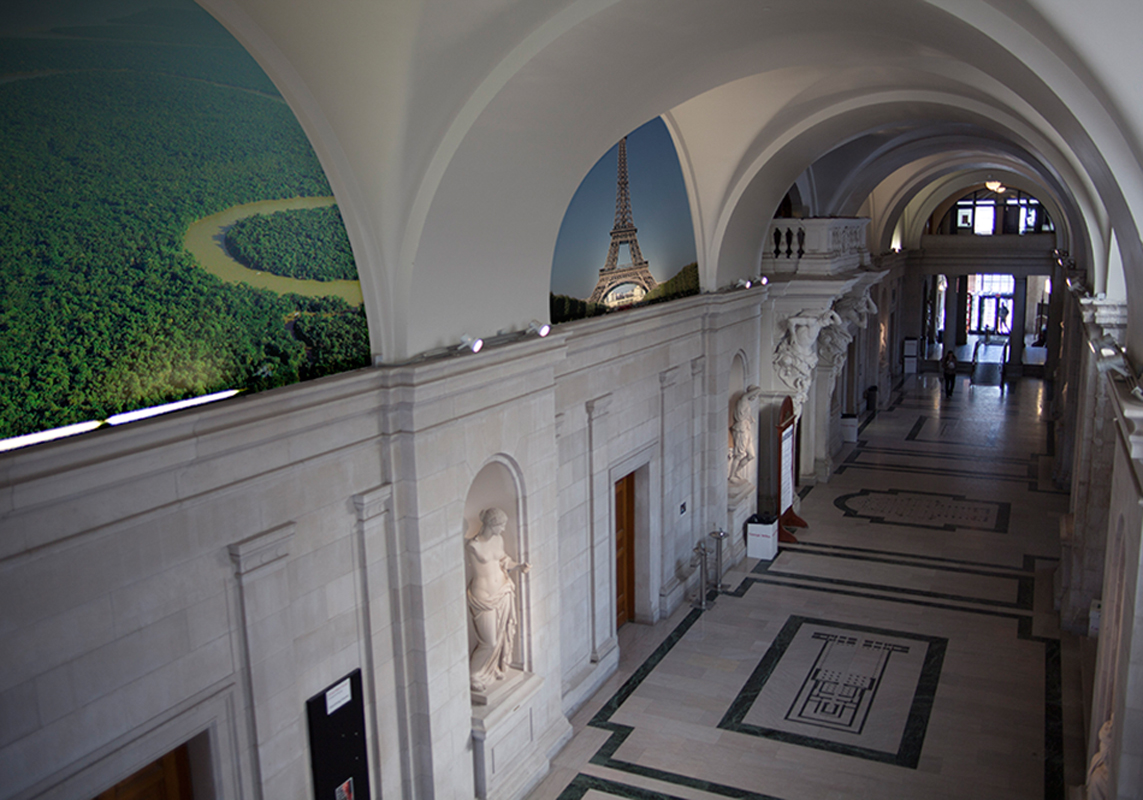 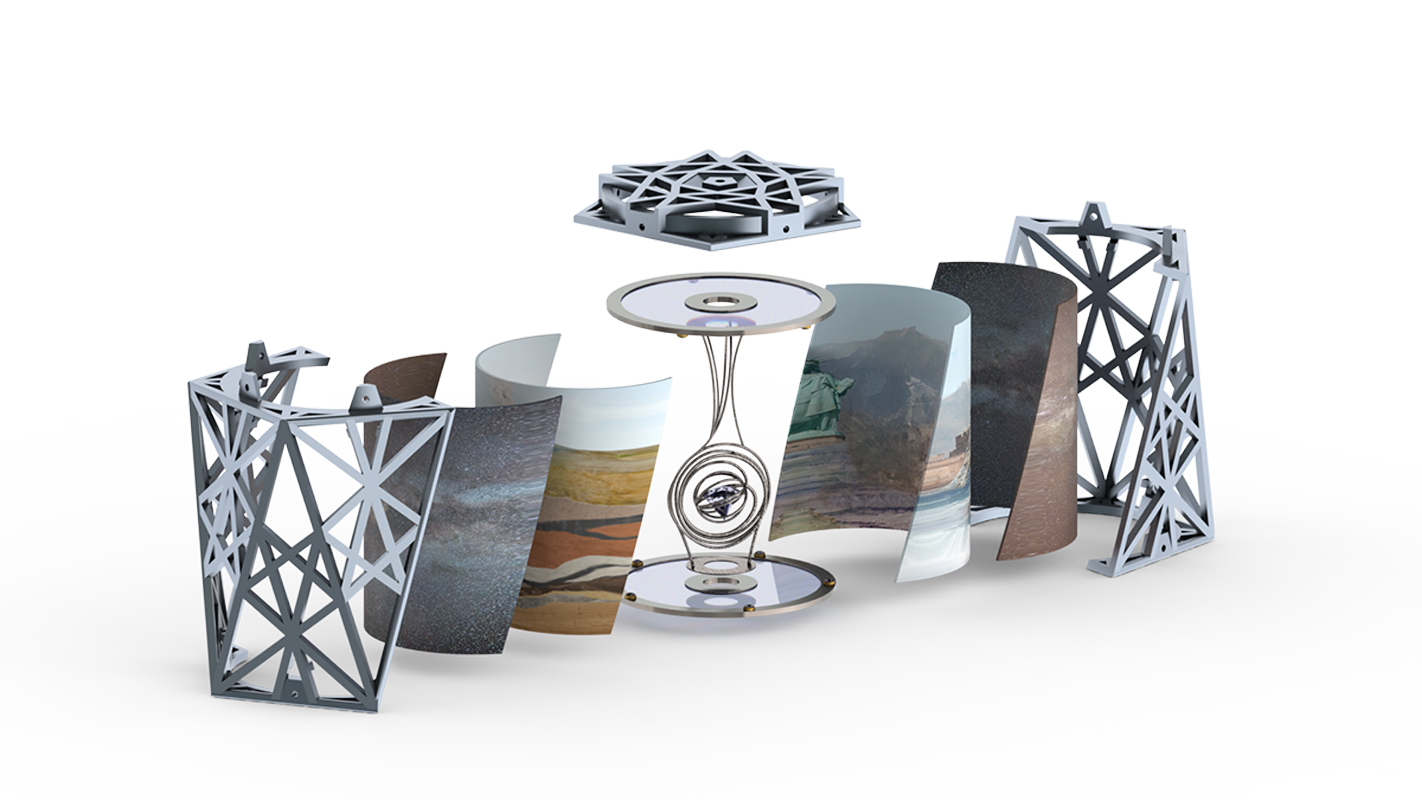 The data collected before May 1 will be engraved on a sapphire disk, coated in aluminum and enclosed in sheets of metal. This unit will then be sent to the moon on the Astrobotic Technology lunar lander in late 2015 or 2016. (credit: William Alba)

Imagine having to describe the world you live in using only images of landmarks. If you could only choose ten, what would you pick? A sentimental feature of your hometown? A historic relic? A fading natural landmark? Over the years, a myriad of historians and individuals have recorded their own interpretations of the world they live in, providing future generations with a brief glimpse into the past through the eyes of another. But is there a way to merge these unique studies into a universal perspective of our world? William Alba, the director of the Science and Humanities Scholars Program at Carnegie Mellon University, has been working towards this goal with a project called Earth Tapestry.

The Earth Tapestry project aims to determine the most important landmarks on Earth, both natural and manmade. Once this information has been collected, it will be archived on the moon, in the hope that one day it will provide individuals with an understanding of the Earth as it was in previous eras. “The way we’ve done this sort of archiving in the past has leaned pretty heavily on the work of individuals and of committees,” Alba said. “But what we say about ourselves as a society is something that should be decided by as large of a group as possible.”

In order to involve a large number of people, Alba wanted to use a website where people could vote on individual locations. This data would then be converted into a general ranking.

“The basic problem was how to get people’s individual preferences converted over into a collective group preference,” Alba explained. By collaborating with researchers at the Massachusetts Institute of Technology (MIT) media lab, Alba was able to create a website, www.earthtapestry.org, that could produce the required group preference. On the website, each voter is shown two images of landmarks from around the world, such as the Sahara, the Palace of Versailles, or the Carnegie Museum of Natural History. They are then asked to choose which image best represents a displayed adjective. For instance, a voter might be asked whether the Empire State Building or the Musée d’Orsay is more awe-inspiring.

As these comparisons are completed, an algorithm similar to the TrueSkill algorithm, a ranking system developed by Microsoft Research, is used in order to convert the data into a generalized ranking. Alba compared Earth Tapestry’s voting and ranking procedure with sports rankings. In team sports, multiple pair-wise comparisons are made between teams, which eventually results in a ranking system, despite the fact that not every team plays every other team. Similarly, the Earth Tapestry system uses pair-wise comparisons in order to generate a ranking of important locations, without forcing every voter to compare every location.

Along with ranking Earth’s important landmarks, the Earth Tapestry project also aims to preserve the discovered information. This will be done in a variety of ways, namely by archiving the information on the moon. On May 1, the existing data will be supplied to the Carnegie Mellon Moon Arts Group, which will be in charge of transferring the data to the moon. Voting will remain open after May 1, but any new data will not be archived. The existing data will be laser-engraved on a sapphire disk, coated in aluminum and enclosed in sheets of metal. This unit will be placed in a chamber of the Astrobotic Technology lunar lander, which is set to arrive on the moon during the second half of 2016. The chamber will also house three other information preservation projects entitled Sagan Planet Walk: Moon, Epoch Marker, and Signed Sealed Delivered. Aside from sending the data to the moon, the data will also be stored in deep digital archives.

Fundamentally, Earth Tapestry is an extremely interdisciplinary project. In order to preserve the more artistic side of the project, images of the landmarks with the highest rankings will be displayed in the College of Fine Arts at Carnegie Mellon in 2016 as part of the College of Fine Arts centennial celebration. Throughout the year the images will be rotated, with higher ranked landmarks being displayed for longer periods of time.

Alba hopes the project will continue once the data has been archived. “I would like to have Earth Tapestry continue not just on one location on the moon, but on several,” Alba said. “Redundancy is good if you want to preserve information. If others keep on sending things to the moon and to Mars, I would like to continue to send out volumes of Earth Tapestry, because our opinions of the world will change.”