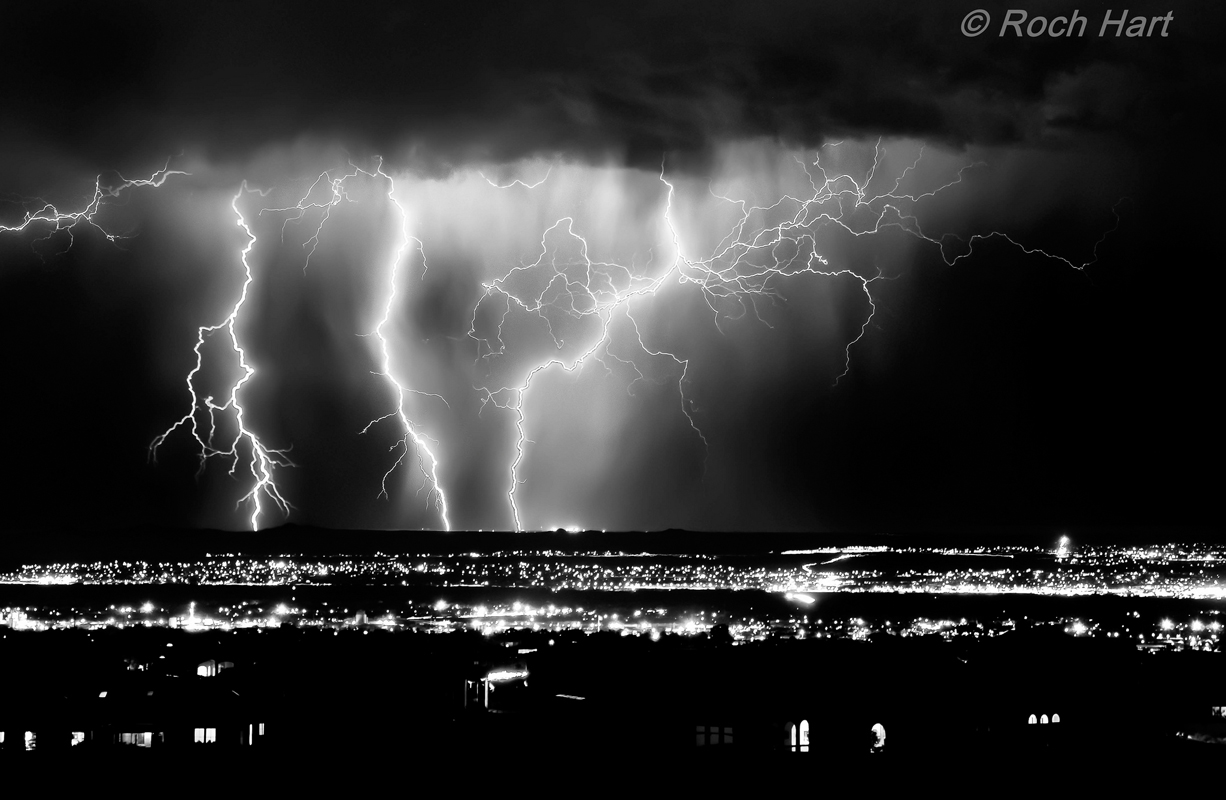 What do you think of when you see lightning? While watching television, you may have noticed that lightning is often the backdrop to an eerie haunted house. Back in grade school, you were probably told that Benjamin Franklin, one of the Founding Fathers of the U.S., flew a kite during a lightning storm in an effort to study electricity. And with the recent April forecast, you may have had the chance to witness a lightning bolt accompanied by pouring rain. It is no surprise that the supernatural-like effects of lightning are capable of evoking the fear and admiration of mankind, but what exactly is the process that gives rise to these spectacular displays of nature?

According to howstuffworks.com, lightning begins with the water cycle, which involves the evaporation of water into the atmosphere followed by the condensation of water into clouds. Eventually, the force of Earth’s gravity pulls back the liquid in form of precipitation, such as rain or snow.

During the condensation step of the water cycle, clouds contain millions of colliding droplets of water and ice. As more moisture enters the clouds, the electrons within the moisture are knocked off. Electrons can also be lost when the rising moisture collides with ice and sleet in the process of falling back onto Earth. In effect, the storm cloud acquires a buildup of static charge, which involves the accumulation of positively charged moisture and the ripped-off electrons at the top and the bottom of the cloud, respectively.

Exposed to rising air currents, the positively charged regions of the cluster are ripped off and delivered to the top of the cloud. This leaves the remaining, frozen droplets to gravitate to the bottom part of the storm cloud.

The degree of polarization of charges within the cloud determines the strength of the surrounding electric field. With adequate strength, the electric field can repel electrons that are present on the ground, driving these electrons deep into the Earth. In turn, the surface of the Earth becomes more positively charged, contributing the polarity of charge between the ground and the storm clouds.

As the electric field grows stronger, the air surrounding the cloud becomes ionized. Through the process of ionization, electrons are removed from the molecules of the nonionized air. What would have originally been an insulator — resistant against the flow of charge — transforms into plasma, or ionized air. The conductive property of plasma allows for the free flow of electrons from the cloud to the ground.

Lightning bolts start off with the formation of step leaders, which are paths of ionized air that branch in the direction of Earth. Identified by their faint, purplish glow, step leaders provide media through which electrons from the bottom of the cloud can pass. While it is not clear why these paths have zigzag shapes, it is thought to be a result of differing levels of electrical conductivity within the air, caused by the presence of dust particles and other impurities within the air. Not to be confused with an actual lightning strike, step leaders serve to map out the path in which the strike will travel through. Meanwhile, the electric fields cause the propagation of streamers, or surges of positive charge from objects on the Earth. Like step leaders, they also display a purplish glow, but with more distinct edges.

When a step leader comes into contact with a streamer, the ionized air seals the connection between the cloud and the Earth. When lightning strikes, a discharge of current flows through this path, allowing for positive and negative charges to travel to opposite sides. Hence, lightning can be thought as Mother Nature’s way of neutralizing the imbalance of charge between the cloud and the Earth.

In addition, when the current flows between the leader and streamer, an enormous amount of heat is produced. With a temperature even higher than the surface of the sun, the heat of the lightning bolt creates its characteristic, brilliant white-blue flash. At the same time, the surrounding air explodes from the intensity of the heat, causing a shock wave that leads to the production of thunder. Once the main strike of lightning occurs, it is quickly followed by 30 to 40 secondary strikes. Occurring in rapid succession, secondary strikes can elongate the length of time the original strike appears to be present. A time delay between the original and secondary also creates the illusion that the main strike is flickering. From ionization to the moment of strike, it is surprising to think that the process of lightning occurs within a mere fraction of a second.

Despite its eerie beauty, lightning is definitely something to avoid. The National Weather Service estimates that in the U.S., 330 people are struck by lightning every year, including 55 deaths. Hence, it is important to be aware of precautions against the fatal effects of lightning. During the event of a lightning storm, it is important to take approriate shelter areas, such as a building or car. It is never a good idea to hide under a tree, which can attract lightning. While indoors, you should avoid using phones with cords or coming into contact with indoor pipes that may be made out of metal.

Lightning is probably one of the most powerful exhibit of electrostatics that nature has to offer. In fact, the sight of it can be safely appreciated from the comfort of your own home. And while the warm months continue to roll on, a lightning storm can create adventure out of what could have easily been another rainy day.