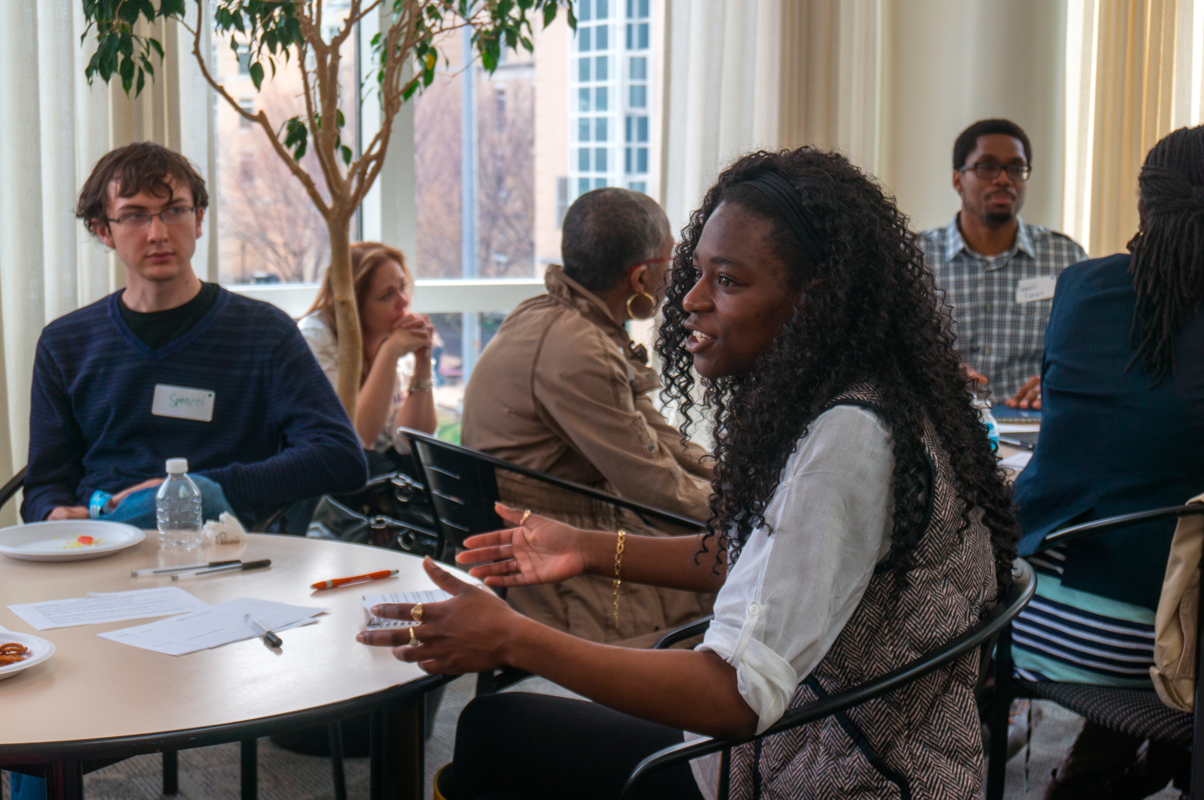 Student Body Vice President-Elect Jibby Ayo-Ani, junior information systems major, participates in a discussion about diversity at Carnegie Mellon on Thursday in the Danforth Lounge in the Jared L. Cohon Univesity Center. Attendees broke into small groups for discussion, and then reconvened as a large group. (credit: Abhinav Gautam/Photo Editor)

Carnegie Mellon is in the process of finalizing its 2015 Strategic Plan, a series of strategies that will guide university policy for the next decade. The Plan is organized into three main pillars: Transformative Teaching and Learning; Transformative Research, Creativity, Innovation, and Entrepreneurship; and The Transformative CMU Experience. Senior global studies and Hispanic studies double major Juan Acosta noticed something missing, however, after attending the most recent Strategic Planning town hall event: diversity.

Acosta wrote an opinion piece for the March 23 issue of The Tartan voicing his discontent. Last week, Acosta hosted two student-led diversity forums — one on Thursday and one on Friday — hoping to come away with a set of tangible strategies that the university can implement.

“All the pillars are supposed to have diversity woven into them, in one way or another,” Acosta said in the introduction to Thursday’s forum, hosted in Baker Hall’s Giant Eagle Auditorium. “So at this meeting, it was clear to me that there was a lack of commitment to diversity in the presentation that was delivered, and it lacked a lot of student detail. It also lacked a lot of student input, which is why I decided to host a student forum.”

At the forum, students and faculty broke off into small discussion groups to work through a list of questions that Acosta had provided. The questions — including “What does the phrase ‘transformative experience’ mean to you?” and “How do you believe Carnegie Mellon can recruit qualified minority students and ensure they graduate on time?” — focused on diversity in the context of the Strategic Plan. After an hour of discussion, the groups reconvened to share what they had talked about.

Acosta worked with a small committee of students and faculty who, he said, came together after his piece was published in The Tartan. Acosta specifically credits M. Shernell Smith, assistant director of Student Affairs, for helping put together the forums. “We just came together to think, ‘What’s a way we can do something with this?’ And the person who was really integral to putting this all together was Shernell,” he said.

Smith emphasized the importance of student voices in conversations surrounding campus diversity, itself a diverse and complicated issue. “I think when you look at diversity, it is about who we have, but also what we do and what we have,” Smith said. “It’s not just about individuals; it’s about diversity of thought and how we go about our thinking and how we go about our engagement.”

Smith pointed to the many existing university initiatives that target diversity, including the Community Collage during orientation and this year’s focus on Martin Luther King, Jr. Day as a “day on” to look at issues of diversity and race in America rather than just a day off from classes. Smith also advises Colors@CMU, a student organization just recently recognized by the university that organizes events meant to start conversations about diversity on campus.

The Office of Admission also hosted the Celebration of Diversity weekend this past weekend, an event designed to help prospective minority students feel included in the Carnegie Mellon community.

The Strategic Plan, Smith said, gives the administration and students a chance to look critically at how the university addresses issues of diversity. “It’s everybody’s issue, but also at the same time I think that we’re in a place in which we’re looking ahead. The Strategic Plan allows for there to be evolution from where we’ve been; it allows us to look at where we could be and where we should be,” she said.

“One of the things that President Suresh talks about a lot is that at the intersection of innovation is diversity,” Smith said. “And so that comes forward not just in terms of numbers, but just in meaningful engagement and dynamics associated with the collaborative nature of what we talk about at Carnegie Mellon.”

Scribes sat with each discussion group to take notes on the discussion and the ideas presented; Acosta and the committee who organized the forums are currently drafting a call to action for the university based on the discussions between students and administrators last Thursday and Friday.