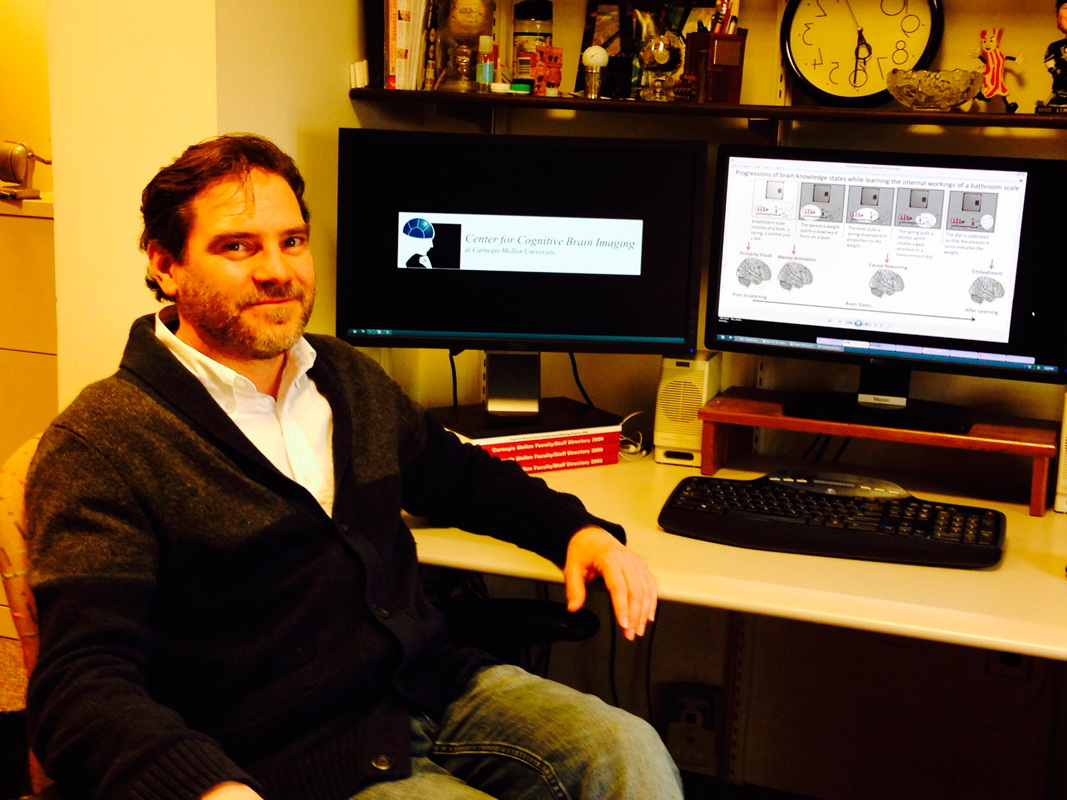 As part of the global effort to explore and understand complex behaviors of the brain, Robert Mason, senior research associate and Marcel Just, director of the Center for Cognitive Brain Imaging (CCBI) at Carnegie Mellon, have been studying how the brain learns and processes successive information.

In May 2015, their most recent findings, from projects that are part of Carnegie Mellon’s BrainHubSM initiative, will be published in Volume 111 of the scientific journal NeuroImage. Mason, the lead author of the study, believes that their work will benefit research on future learning techniques by approaching this subject area not in a behavioral manner, like most studies in the past, but rather by directly examining the brain.

Although this topic of how the brain learns is an ongoing process that Mason and Just continue to explore, their most recent paper centers around a study consisting of fourteen college students. The students, six female and eight male, were asked to listen to informative descriptions of four different types of mechanical systems and were analyzed through the CCBI’s fMRI machine. Each participant received information about these systems that could easily be understood from a nontechnical standpoint, and were given small visual aids to support the explanations.

The researchers studied mechanical systems including a bathroom scale, a fire extinguisher, an automobile braking system, and a trumpet. Although these objects are common to everyday life, the mechanics of the objects are not generally known to the public. For example, the participants in the study learned about the bathroom scale through phrases such as “A bathroom scale consists of a lever, a spring, a ratchet and a dial,” “the person’s weight exerts a downward force on a lever,” and “the lever pulls a spring downward in a proportion to the weight.”

Through reverse engineering, Mason and Just were able to take the data exhibited from the fMRI machine and deduce the underlying neurological processes that generate understanding of such mechanics. “You see how it works, and you have to reason back to what mechanism would give you this pattern,” Just said. “For example, if we see activation in an area of the brain that is very commonly associated with visual imagery, we can say that they are forming some type of visual connection.”

This study also utilizes machine learning through the use of a “classifier,” which takes in variables that form a relationship and, upon the presentation of new and unknown variables, will be able to classify where those new variables fit into the mappings of data.

In this particular application, the machine is able to identify what people are thinking about in a precise manner. “The thought patterns are specific to that system,” Just said. “So your activation pattern for when you think about a trumpet is different from when you think about a bathroom scale.” This classifier essentially allows scientists such as Just and Mason to accurately measure the thought processes of people.

Both Mason and Just found the results from the classifier as the most interesting aspect of this study thus far. Mason explained that “the degree to which you can see similarities in knowledge representation across individuals” is both surprising and interesting.

According to Just, since the classifier analyzes multiple individuals, the fact that it can identify similar results for all individuals shows that these patterns are uniform for all individuals. “All of our brains are organized in the same way,” Just said. For instance, autistic brains process information like concrete objects and emotions the same way as standard brains do, and the only difference between the two are thoughts in relation to social interaction. The way one understands how a hammer works or how the emotion of anger feels is the same across completely different backgrounds.

Just explained that the brain categorizes learning these mechanical processes into four main parts. Before learning, the brain’s actions are “primarily visual.” As more detail is given, the brain transitions to a “mental animation” of how the system works. The third stage involves a state known as “causal reasoning,” which is when the brain puts together visualizations to try and understand what causes certain reactions. The last step is known as “embodiment,” in which one would relate one’s own body to the system. So, for example, if a hammer was being described, the individual receiving this description would eventually connect his or her own dominant hand to a hammer and visualize or understand the use of the hammer from a personal perspective. Just theorizes that, even with abstract concepts such as mathematics or theoretical physics, which humans cannot physically interact with, people still try to connect the body with the concept as a way to gain a better understanding of how it works.

Mason chose to use mechanical systems as the main focus for the study as a starting point. “With many mechanical systems, we already know what the system does and how to use it, but unless we really look into it, often times we don’t know how something works.” He hopes that understanding the brain’s learning process will eventually trigger curiosity in individuals and lead them to “think like little scientists.”

Mason and Just’s research will continue to explore the relationship between learning and the brain, and they hope to expand the range of materials, as well as domains of knowledge, in future tests. Eventually, they would like to apply different training techniques that will apply to future classroom instructions.