Tales from Abroad: Learning to go with the flow 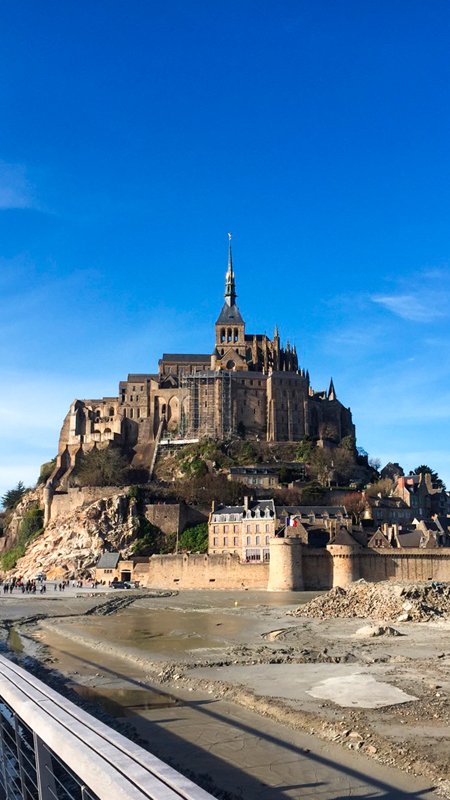 The beautiful Mont Saint-Michel castle is an ancient monastery on an island in Normandy and offers tourists unparalleled traveling experience. (credit: Jennifer Tuttle/)

Before I studied abroad, I hadn’t left the confines of North America. Sure, I had been on trips to Canada with my family and several high school clubs, but that was the extent of my international travels. After just under two months studying abroad, I have now been to three new countries. I’ve explored several cities in France, where I can somewhat easily navigate and communicate with locals. But I’ve also been to countries where I had to hope that the people I encountered would be able to speak English or at least be willing to mime their way through a conversation with me.

I tend to be an organized person who makes a plan and follows through with it. The idea that I would get lost, have to look at a map, have to ask questions, and maybe have to take a few detours along the way was honestly frightening.

Somehow, though, during my time here, I have learned how to relax, let go, and just go with the flow. And that is how I have had some of the most memorable experiences of my life. I took a day trip to a place I had never heard of, with no idea what I would do there, and ended up exploring a charming town with a rich history and beautiful sights. I had a delicious home-cooked dinner after going home with a Danish family I met at a brewery tour in Copenhagen. I have had conversations with people who come from cities I can barely pronounce in countries that I have only vaguely heard about. I have ended up in bars and clubs that I will never be able to place on a map where people come up to me simply because they want to practice their English and hear about the United States, and those discussions have been some of the most riveting in my life.

I have tried to find museums or stores and ended up wandering parks so vast and beautiful they made me forget I was in the middle of one of the largest cities in the world.

Spontaneity has been my greatest ally during my time here. While I may sometimes feel uneasy about not having a concrete plan, it’s also incredibly liberating to realize that I can go anywhere and do anything that I want. This will probably be the only chance I have to live in a foreign country and feel like I have no real responsibilities holding me down, so I have decided to take this time to be young and free.

I have learned how to live in the moment. While that sometimes means missing the last metro home and having to pay for a taxi, or getting caught in the rain without an umbrella, nothing has gone horribly wrong so far. And even if it does, that’s just the way life works. No matter how hard we plan, we never know exactly how it will turn out, so why not welcome every unexpected experience, every chance that is presented to make a connection and meet some new people? It just may change your life.