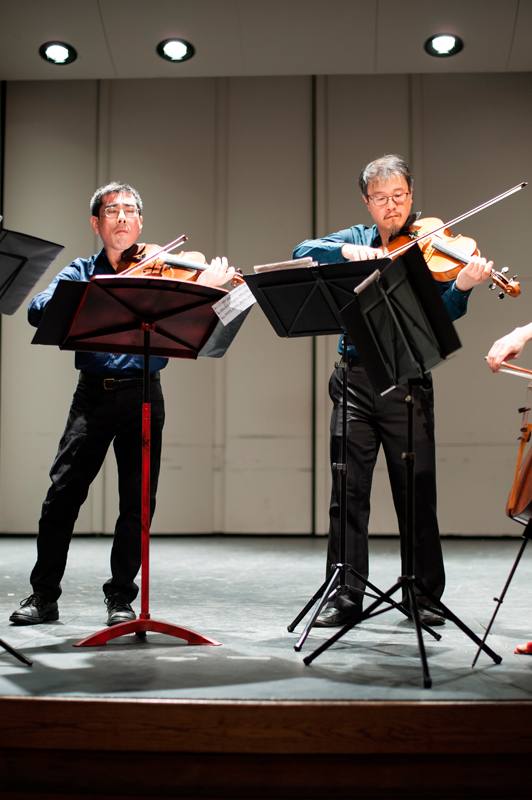 Violinist Rick Shinozaki and violist Charlton Lee play each of the challenging pieces with animation and personality. (credit: Matthew Nielsen/)

The internationally renowned Del Sol String Quartet graced Carnegie Mellon University with their presence at their concert in the College of Fine Art’s Kresge Auditorium Thursday night. Though the concert was free and open to the public, it was disappointing to see that there was only a smattering of audience members, maxing out around 50. The musicians — Benjamin Kreith and Rick Shinozaki, violin, Charlton Lee, viola, and Kathryn Bates, cello — played their hearts out anyway.

Based out of San Francisco, the Del Sol String Quartet has been focused on the future of music and its contemporary creators since the group was founded back in 1992. Known for innovative and fascinating art partnerships and their extensive commissioning of modern works, Del Sol has brought sounds from around the world to many audiences during their tenure. The quartet has seven albums, and played a piece off their most recent album Sculthorpe: The Complete String Quartets with Didgeridoo, at Carnegie Mellon.

The pieces played on Thursday night were all written by modern composers. The first piece they played was called “Fast Blue Village 2,” and was written in 2007 by Uzbekistani composer Elena Kats-Chernin. The piece began with an eerie synchronized introduction from the cello and the viola. During the course of the piece, two or three of the instrumentalists would have phrases played in synchronization. This gave the piece the nice ebb and flow of coming together and moving apart, giving the audience a resolution periodically, and adding structure to the shape of the piece. The piece sounded incredibly sad and a little angry as it finished out the last eight measures or so with choppy and harsh notes played by all four musicians simultaneously. According to the program, “Fast Blue Village 2” was created “from material to be played by a set of robots designed by Roland Obeiter” and indeed, you could tell.

The second piece was introduced by the violist, Charlton Lee, who talked about the nature of the piece as “taking the old with the new.” The piece — “Calligraffiti” — written by Chinese composer Huang Ruo in 2009, mixes the traditional word “calligraphy” with “graffiti” and plays off that theme during the course of the piece. Lee described the piece as being reminiscent of what it was like to grow up in a Chinese family in the United States, due to Ruo’s mixing of “something so authentic with something so profane.” “Calligraffiti” began with a high wavering whisper from the cello, before others joined in with a whispery tone. Playing with very little pressure and close to the bridge on these stringed instruments, the piece of music trod the line between ugly and pretty noises. Other less traditional tones, liberal use of artificial harmonics, and minimal vibrato also gave the piece an exceptionally unique feel. Occasionally one musician of the bunch would play with a clear strong tone, and it felt like a breath of fresh air. I began to find myself wishing for more of these interludes, as I am a person not familiar with contemporary chamber music, and the weird scratchy tone often confused me. Ultimately the dichotomy between the clear tone and the rest of the tones played by the musicians was part of what the piece was all about, and I was intrigued having experienced something so innovative.

The third piece was the piece from their album. Though played without the didgeridoo part, String Quartet No. 14 “Quamby” still called to mind the imagery of the Tasmanian shore its composer hailed from. Reminiscing on life as a child, Peter Sculthorpe wrote the piece about cliffs he used to walk on as a child, and the experience of watching the birds and thinking about the cliffs’ history. The word “Quamby,” the name of a certain bluff, means “save me” or “mercy.” The piece is in four movements, though all were connected by a general feeling of loneliness and wonder. The first movement’s long and dramatic phrasing sounded kind of like the beautiful sweeping melodies of the Pride and Prejudice film from 2005, though played in a completely minor key. The third movement featured some gull sounds mimicked perfectly on the cello. All in all this piece was my favorite of the evening, managing to convey a whole story in just four short movements.

The second half of the concert began with Italian composer Stefano Scodannibio’s take on Monteverdi’s famous madrigals. “Mas Lugares (su Madrigali di Monteverdi)” did indeed use melodies and harmonies found in the madrigals, but explored these well known songs using new texture and strange harmonic couplings. During his introduction of the piece, violinist Benjamin Kreith talked about how “tactile” a composer Scodannibio was, and that became aggressively apparent during the course of the piece. Maybe because I’m kind of a wimp, I found myself wishing that the pieces were played with traditional tone and emphasis, as I am not used to hearing such husky and squeaky sounds. Though I can appreciate the creative and textured piece, it definitely is not one that is going on my listening list.

The concert ended with a piece written by a member of Carnegie Mellon School of Music faculty, Professor Reza Vali, who hails from Iran. His piece “Gâtâr (Calligraphy No. 11)” used the Persian modal system, instead of a Western modal system. This made the intervals in the piece sound very different from the intervals audiences are accustomed to hearing in, say, Mozart. It was the Pittsburgh premiere of this piece and the third piece of Valli’s the quartet has played. The piece included frequent solos from the instrumentalists, and often seemed to include portions of call and response. The response to the piece was enthusiastic and Professor Vali joined the musicians on stage for a final bow.

It was wonderful to attend a performance from individuals who are on the forefront of contemporary chamber music, and it only made me wish that more people had gone to see the performance. The innovative use of tone quality, harmony, and articulate storytelling provoked me to consider what I think of as beautiful chamber music, and where I think chamber music is going. For a genre so rooted in the music of its historical greats, I think it is important to put down the Beethoven once in a while and look to the future.