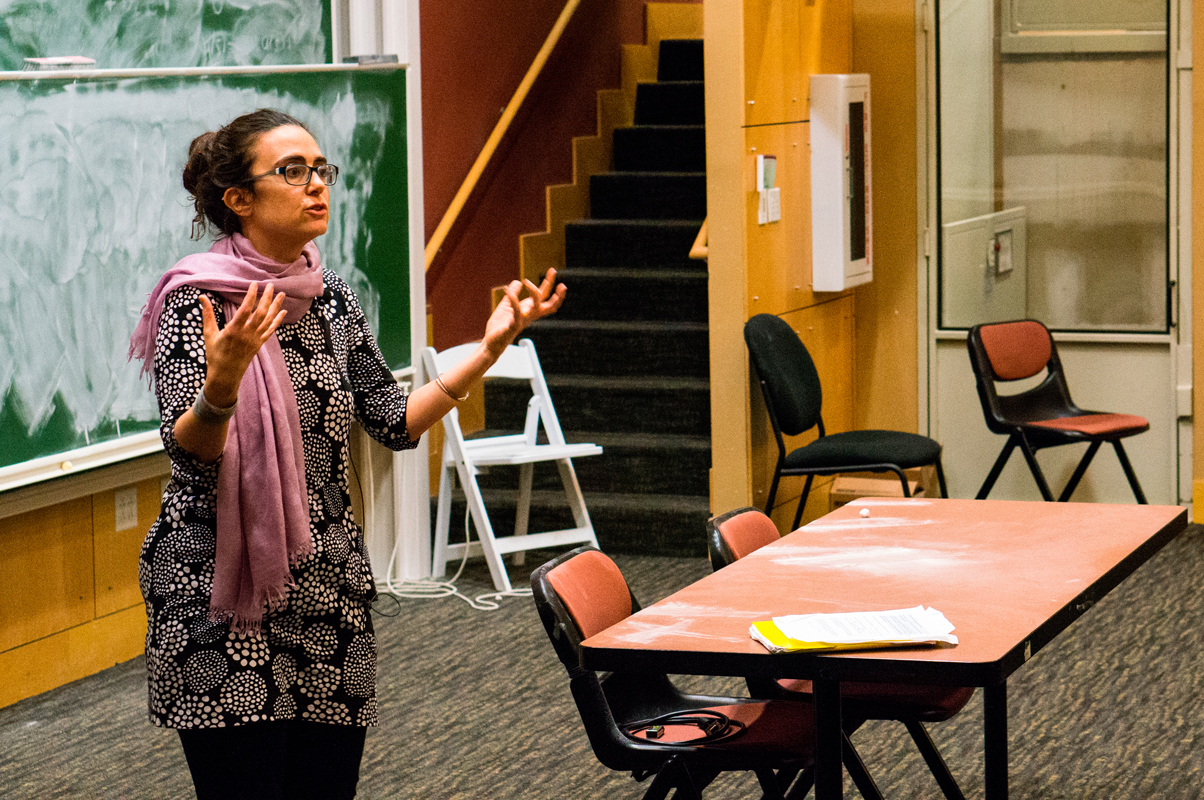 Theoharis spoke about the myth surrounding Rosa Parks’s activism and how it hurts our understanding of the movement. (credit: Abhinav Gautam/Photo Editor)

Jeanne Theoharis gave a riveting lecture focused on breaking misconceptions about the legendary Civil Rights activist, Rosa Parks, to a captivated audience this past Wednseday.

A professor at Brooklyn College and author of the critically acclaimed book, The Rebellious Life of Mrs. Rosa Parks, Theoharis delved into Parks’ background as a civil rights activist at Giant Eagle Auditorium on March 25. Among her key points was how Parks’ famous bus protest was not mere coincidence, but stemmed from her years of fighting against racial injustice.

Theoharis’ dynamic and impassioned lecture painted Parks in a way that broke the image of her as just a tired, middle-aged woman who refused to get out of her seat. Parks was described as “feisty,” and as continuously asking others, “Why do you push us around?”

This rebellious spirit was evidenced by Parks’ history in the Civil Rights Movement. As a child, she would sit by her shotgun-wielding grandfather in the south who protected their home against racial violence. As an adult, Parks became interested in the movement, and a turning point came when she met fellow activist and future husband Raymond Parks in 1931, who was a lawyer in the infamous Scottsboro case.

Throughout the 1940s, Parks took a more prominent role in the fight against racial injustice. She joined her local NAACP chapter, becoming its Grand Secretary, and worked with other prominent Civil Rights leaders such as E.D. Nixon in fighting for voter registration and eliminating poll taxes. After years of her own struggle, Parks voted for the first time in 1945. Parks then continued to work with criminal justice issues, particularly by finding legal defense for cases where black men were being wrongfully accused of crimes and cases where the law was unresponsive to white brutality.

However, Parks’ history is not without its hardship, a feature overlooked by many. Due to her activism, she was often banned from working and faced immense economic problems. By the late 1940s, Parks had begun to burn out. In fact, early in 1955 (the same year as her famous bus protest), Parks stated that she believed the movement was out of her hands, but was the future of new generations. Yet, her perseverance and her attendance at the Highlander School that summer would rekindle her passion.

As Theoharis stated, it is this perseverance and also Parks’ knowledge of the movement that make her a true hero. Despite her hardships and her knowledge of the racial violence often taken against black activists, Parks continued to fight for civil rights. However, the reiterated fable that we are all familiar with loses these details and this agency — Parks’ action on the bus, though still heroic, reduces her to being a hero by chance, not a hero through her own virtues.
In fact, Theoharis dispelled several myths of the bus story during her lecture. First, Parks was not the first African American that refused to give up their seat on a bus. Others, including Parks, had done so and had been arrested in the past. Next, when Parks was asked to move from her seat, she did not merely state that she was tired after her job as a tailor. She understood the consequences of her actions, and takes this injustice as an opportunity to not consent to this treatment. Theoharis stated that it was only after the insistence of the bus driver that the police actually arrested her, and she was later released from jail that night, shaken but unharmed.

So why is Parks remembered as such a heroic and influential figure, if others had already conducted several similar protests?

One large factor of Parks’ legacy is her collaboration with E.D. Nixon. Nixon, a prominent white lawyer, saw Parks as a valuable test case. Parks had an “ideal image”: she was “working class in economics” and “middle class in demeanor”, making her relatable to other blacks. Most importantly, Nixon knew Parks’ spirit was unbreakable.

Theoharis continued that although Parks’ legacy is often left with her at the bus, she actually continued for the remainder of her life. Parks helped organize the highly intricate and methodically planned carpool system which made the Montgomery boycott of the bus system possible. This boycott, and other protests organized by Parks, would help propel civil rights leaders such as Martin Luther King Jr. into the national movement.

Theoharis’ lecture gave new insight on a legendary icon and true American hero. However, Parks’ life shows that with enough courage, perseverance, and faith, any individual can dramatically change the socioeconomic and political culture of our nation.

Most importantly, though, Theoharis’ talk opened up a much needed dialogue in the humanities departments here at Carnegie Mellon, a dialogue about the ways in which historical narratives learned in high school affect the way students learn about history in college. For a school whose humanities are often overshadowed by other departments, talking about the ramifications of the way history is told is important in boosting the school’s awareness of the direction of the humanities, and keeps Dietrich on the cutting edge of such education.