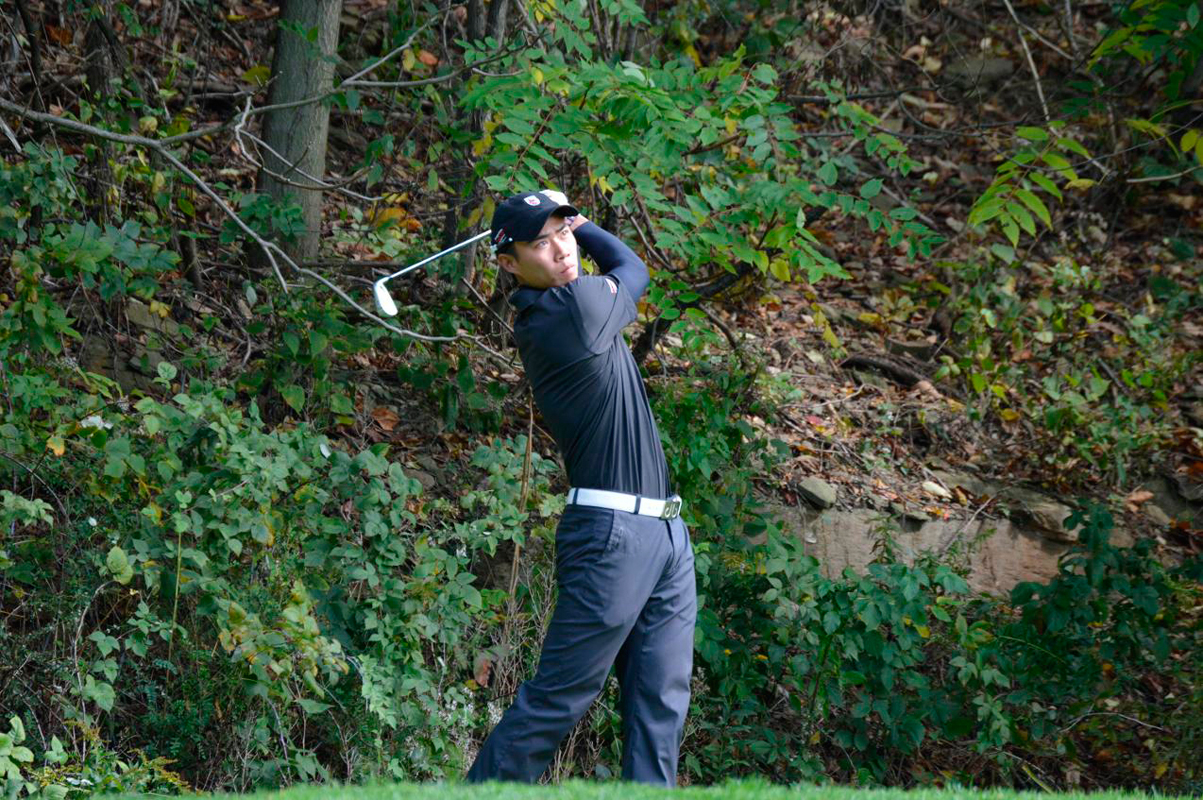 Qian holds his follow through as he watches a shot. (credit: Courtesy of CMU Athletics) 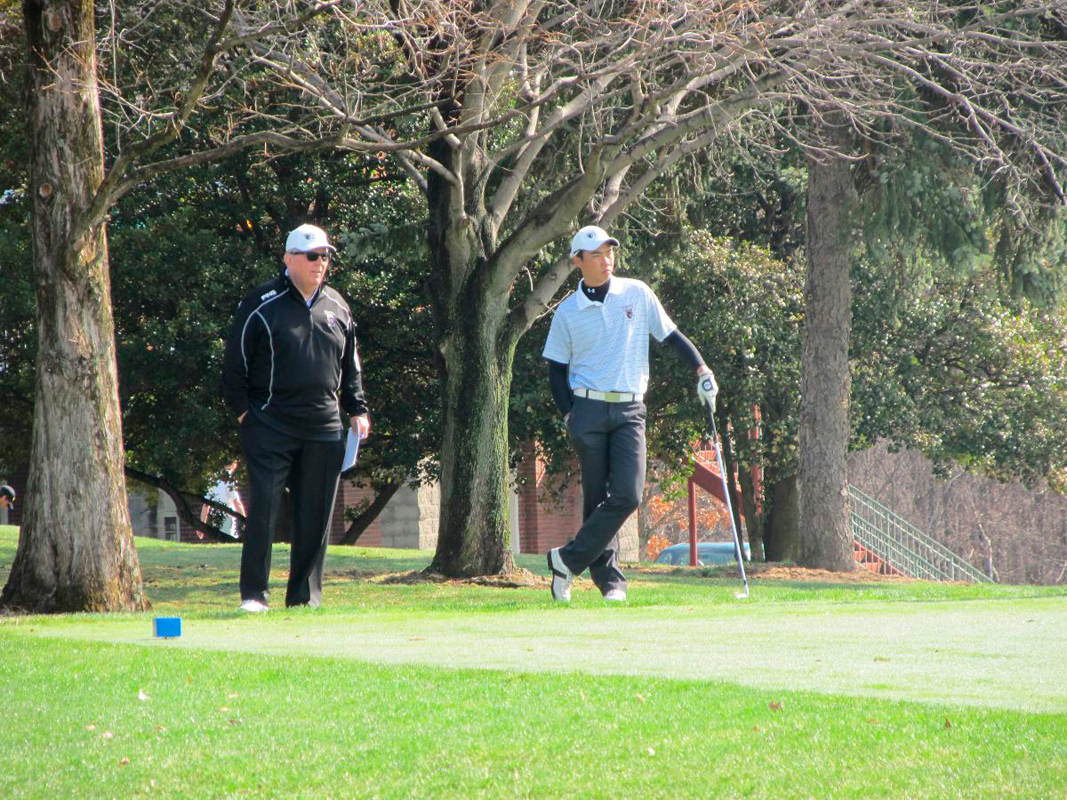 Qian and a coach size up a hole before taking aim. (credit: Courtesy of CMU Athletics Department)

With a day remaining in the two-day University Athletic Association (UAA) Men’s Golf Championship, sophomore George Qian led by a single stroke. The thinnest of margins separated him and the competition, but Qian had been in this position before, and was able to fend off the mounting pressure. Despite letting the lead slip by the eleventh hole, Qian was able to recover and tie the clubhouse lead going into the final hole. Qian needed a par or a birdy to keep his chances alive. Despite missing the green with his second shot, an excellent chip shot set up an eight foot putt to tie up the competition. Qian sunk it, setting up a playoff.
The playoff was over quickly. After Qian’s opponent missed the green on his second shot Qian “just aimed for the middle of the green.” He hit his mark, setting up a two-putt, which Qian described as his favorite situation.

Qian was able to draw on recent experience to help him through the nail biter of a finish. He said sinking the putt to force the playoff was “like a flashback” to the end of his competition at the amateur tournament in his native Iowa, where he dropped a playoff after two holes and ended up runner up. The familiarity of the situation helped the Bettendorf native ease his nerves. Qian, self-described as competitive and calm, backed up his claim and sank the second putt to lock down a UAA title, the first for a Tartan since 2009.

His triumph at the conference tournament added to his growing trophy case, which already included a spot on the Golf Coaches Association National All Freshman team last year.

Qian’s dedication to golf has been a lifelong endeavor. He started at the age of nine, around the same time his parents — his father is his caddy at amateur tournaments — and some of his friends started playing. He started to play competitively in middle school. He says the challenge and the impossibility of perfection draw him to the game; there’s always room to improve. Spending two to three days a week on the golf course and spending plenty of time in the offseason in the simulator in Skibo Gym helps him do just that on a regular basis.

It should come as no shock, then, that Qian has little interest in benchmarks and puts a lot of emphasis on improving his best performance. While he said many people talked about 77 as a bad day, he finds it to be an arbitrary tick mark. He said the number did not matter so much as how well someone played. He prefers more concrete numbers such as 67, his personal low score for a tournament.

In addition to the limitless potential to for a golfer to grow, Qian also touted the individuality of the sport. While he admires the work ethic of extraordinarily successful golfers such as Tiger Woods and currently top ranked Rory McIlroy, there is no one he tries to emulate, preferring to forge his own style. He says golf is about creating your own game and “sticking with what works.” A conference title as a sophomore seems to indicate that he’s on the right track. He attended a golf academy in his final two years of high school and even has his sights set on going pro. Qian wants to start out in Asia and play some mini tours in pursuit of breaking into professional golf after he graduates from Carnegie Mellon.

Despite his future plans, academics come first for the finance major. He followed his brother’s lead into finance, thinking he would prefer it to his parents’ profession, engineering. After starting out in the Tepper School of Business, Qian found that he particularly enjoys quantitative classes, such as multivariate analysis. He is also pursuing a computer science minor — 15-110 and 15-112 were his favorite classes in the semesters that he took them. Balancing the combined workload, however, is not a problem. His years at the golf academy taught him to balance golf and academic work, giving him the ability to excel at both.

Including a cascade of top-10 finishes and a conference championship, Qian’s success on the golf course is indisputable. Even so, with a third of this season left, Qian is not even close to done with the front nine of his already illustrious Carnegie Mellon career. The best is almost certainly yet to come.