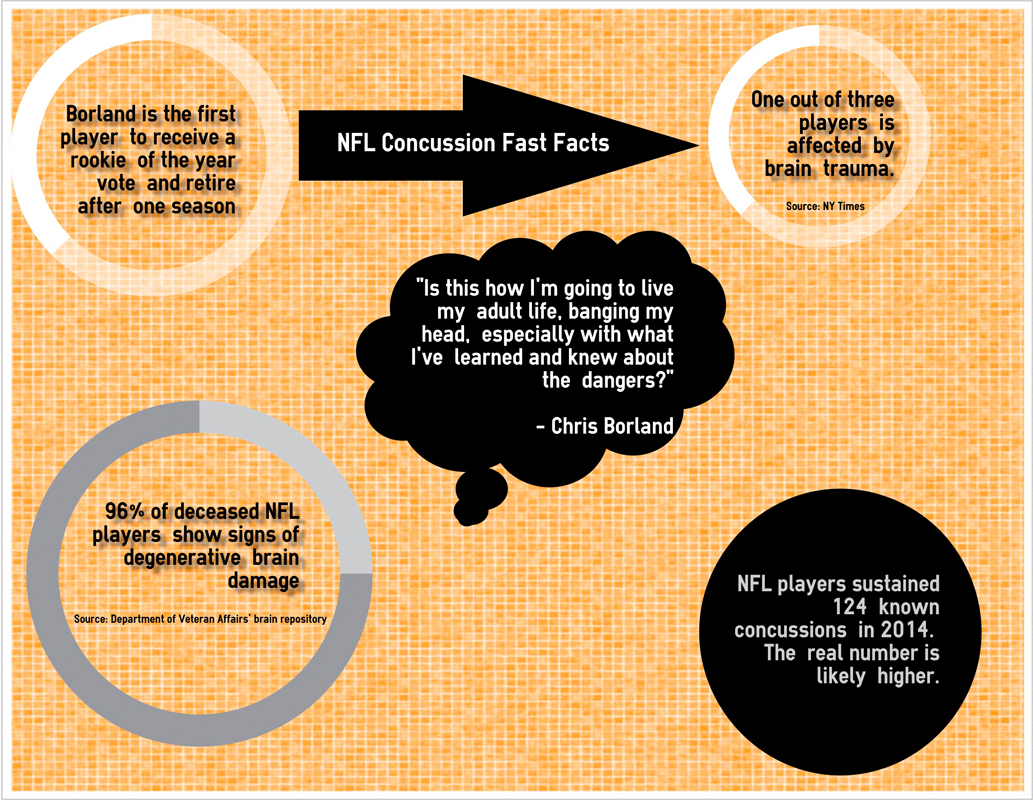 Safety concerns have been plaguing the National Football League (NFL) in recent years, but it seems like more players than ever are voicing their concerns in the form of early retirements.

The average length of an NFL career, currently 3.3 years, has always been fairly low. For every superstar we get to see on the field, dozens of players cannot get playing time, resulting in early retirements. On the other hand, those players that do make it onto starting rosters and become important contributors to their teams often enjoy careers lasting into their thirties and sometimes even forties, barring any career-ending injuries.

Over the past few weeks, however, there have been many prominent names in the NFL retiring early. Jason Worilds, a top linebacker for the Pittsburgh Steelers, retired last week, calling it quits at 27. Jake Locker, the former starting quarterback for the Tennessee Titans, retired earlier this month at 26. The San Francisco 49ers lost 30-year-old linebacker Patrick Willis, who many thought would still be contributing to the team for years to come.

The most jarring of these early retirements, however, is former 49ers linebacker Chris Borland. Borland had only just completed a great rookie season for the team, impressing the 49ers enough to consider him the future for the franchise, especially after Willis decided to hang up the cleats. Borland specifically cited concerns about the risk of brain injuries, having nursed a concussion he sustained during training camp. “I just thought to myself, ‘What am I doing? Is this how I’m going to live my adult life, banging my head, especially with what I’ve learned and knew about the dangers?’” Borland said Monday on ESPN’s “Outside the Lines.”

Injury concerns in the NFL are nothing new. The NFL has been saying that “football has never been safer,” and to a large extent, that is true. Better protective equipment has made an impact on reducing the occurrence and severity of injuries. Better medical practices have limited the duration and long-term damage of individual injuries. In addition, the league has been employing many different initiatives over the past years to attempt to make the game safer, including an onslaught of new penalties for “unnecessary roughness,” limiting the amount of contact practices teams hold during the course of the year, and a concussion protocol instituted in 2013 intended to minimize the effects of concussions through a variety of steps taken before a concussed player can return to play.

What separates these concerns over player safety from past challenges to the NFL is the new culture emerging from both NFL players and NFL fans. On comment boards surrounding Borland’s decision, many have applauded him for making a move that sacrifices the fame and glory he could have gotten in the NFL in order to preserve his quality of life. Many current players like St. Louis Rams guard Chris Long and former players like former New Orleans Saints and Cleveland Browns linebacker Scott Fujita are also lauding him, rather than the traditional response to injury concerns, which is questioning his toughness.

Chris Nowinski, an expert on sports-related concussions, suggested that a significant culture change is taking place in the NFL right now. On Borland’s decision to walk away from football, Nowinski said, “It shows the macho culture of ‘destroy yourself for the game’ is losing its grip, that it’s no longer cool to question people’s toughness. That represents a big shift in thinking from just a few years ago.”

More players are making the choice to value their long-term health over the millions of dollars they can get playing in the NFL. This is not to say that football is becoming more dangerous than it ever has been. Quite the contrary: Safety has definitely become concerning to the NFL, and their efforts to improve the game and spread awareness about the risks of football are leading those who are wary on the risks of playing the game to exit the spotlight with considerable dignity. The changes in the NFL also do not completely ensure a safe game.

Barring any rule changes that will forbid tackling, there will always be some risk of injury playing football, but the safety measures in play now and in development will minimize the frequency and seriousness of these risks.

The NFL will not run itself out of business through continuing to improve safety measures; instead, it will be able to maintain the entertainment value football has and ensure that its key contributors do not suffer long-term consequences as a result of playing in the NFL.