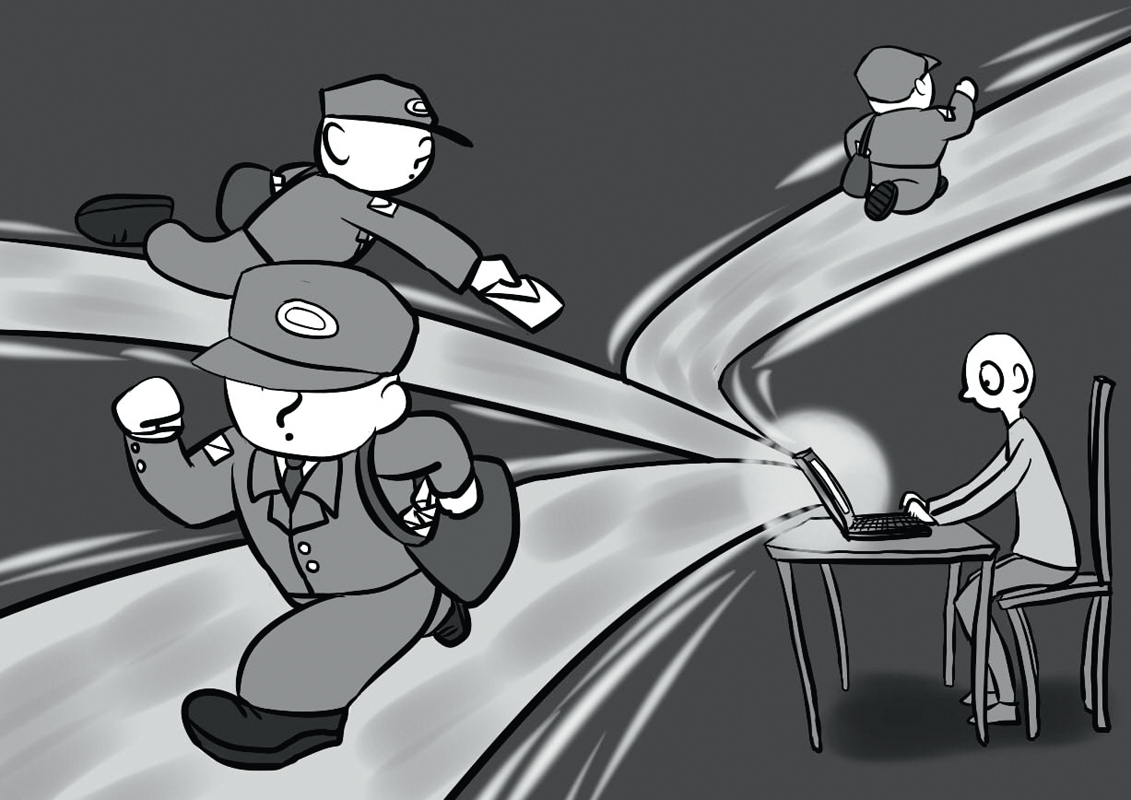 Email: it is something you use everyday. Marked by the well-known “@” symbol and sent and received instantaneously, it costs virtually nothing for a person in an apartment in Hong Kong to send his best wishes to his friend in New York. Email may not seem cool in the modern world, where it has become second nature, but it has changed how the world communicates since its creation in 1971. Email is something that is often misunderstood. Behind the scenes, it is certainly not as simple as the “write, save, send, receive” process we know.

Electronic mail, termed email, was at first only a message that one user sent to another on a single machine; in the past, a computer used to be a giant machine that people used dial-up terminals to access. It wasn’t until 1971 that the first modern email was sent by a man named Ray Tomlinson on the Advanced Research Projects Agency Network (ARPANET). Tomlinson’s breakthrough lead to the ability to send messages to other machine users via the Internet by addressing the destination using the @ symbol, a convention we still follow today. Over the past 40 years, email has evolved just like other computer systems: It now has sender and receiver information, a subject line, a message body, attachments, and it enables users to save a draft at any time.

To read and write email, of course, we need an email client, or what we call an email “service provider.” Some clients are stand-alone, like Microsoft Outlook, which is offered in Windows OS; other common ones, like Hotmail and Gmail, are based on webpages. But whichever you use, the client is the “interface” that displays directly to the users and allows them to read messages in their inbox.

Next, we need a email server that the client is connected to. Servers are software applications run on the Internet, and they listen to specific ports that people and programs will attach to. These Internet servers usually have a long list of user email accounts; for instance, our Andrew IDs, which are registered at domain “andrew.cmu.edu”. Then, if a person wants to send a second person a message, the first person’s email client essentially passes to the server the name of the second person’s account (name before @), and the server will then append the message to the text file related to the second user.

That is just a very brief introduction to a much more complex system. For most email users today, the system we face is actually made up of two different servers running on a server machine: Simple Mail Transfer Protocol (SMTP) and Post Office Protocol version 3 (POP3). In general, the SMTP is like a local postal office, which checks your postage and address and finally finds out where to send your mail.

However, the SMTP cannot parse a domain name, such as cmu.edu, so instead it has to contact a Domain Name System server (DNS). For instance, the DNS would translate a domain like “cmu.edu” to “128.2.42.10”. After the SMTP collects all the required info, the message from the sender will be sent from that server to the target domain’s mail exchange server, an MTA (Mail Transfer Agent). This is like the post office of the destination, which will figure out where exactly to deliver the message.

Finally, for the person at the other end — the target or destination — in order for him to fetch the email, he must work with a client via Post Office Protocol (POP) or Internet Mail Access Protocol (IMAP). If you actually look at your email client settings, POP and IMAP are definitely two popular acronyms. POP, just as its name suggests, is a server from which you can collect the mail others have sent to you. In short, POP is something that your client will reach out to and download the message from to put it on your screen.

But many users demand more than that with their email. One disadvantage of POP is that it is unidirectional: Once you download the message from the server to your computer, it will be stuck there. In other words, POP makes it quite difficult if you want to access the same message from another machine, say your laptop. That is where IMAP comes in as a remedy. This protocol ensures that even after your download, your mail stays on the email server.

For example, when you check an email from Apple on your iPhone, the message will be marked as “read” and updated on the server. Subsequently, that status will be sent back so that all other clients are updated, no matter if you are later accessing the email with a laptop or an iPad.

Today, different communication protocols have been designed. While we have talked about the most popular and widely-used ones, there’s a lot more to the email system than it seems. For example, some users want to send encrypted messages. Another example is SMTP — although it’s a powerful tool, it has many strict requirements and limitations.

Still, the emergence of email has completely revolutionized the way people communicate, transcending traditional physical mail systems. As it keeps improving, we will inevitably see a better, stronger, and more versatile email technology in the future.