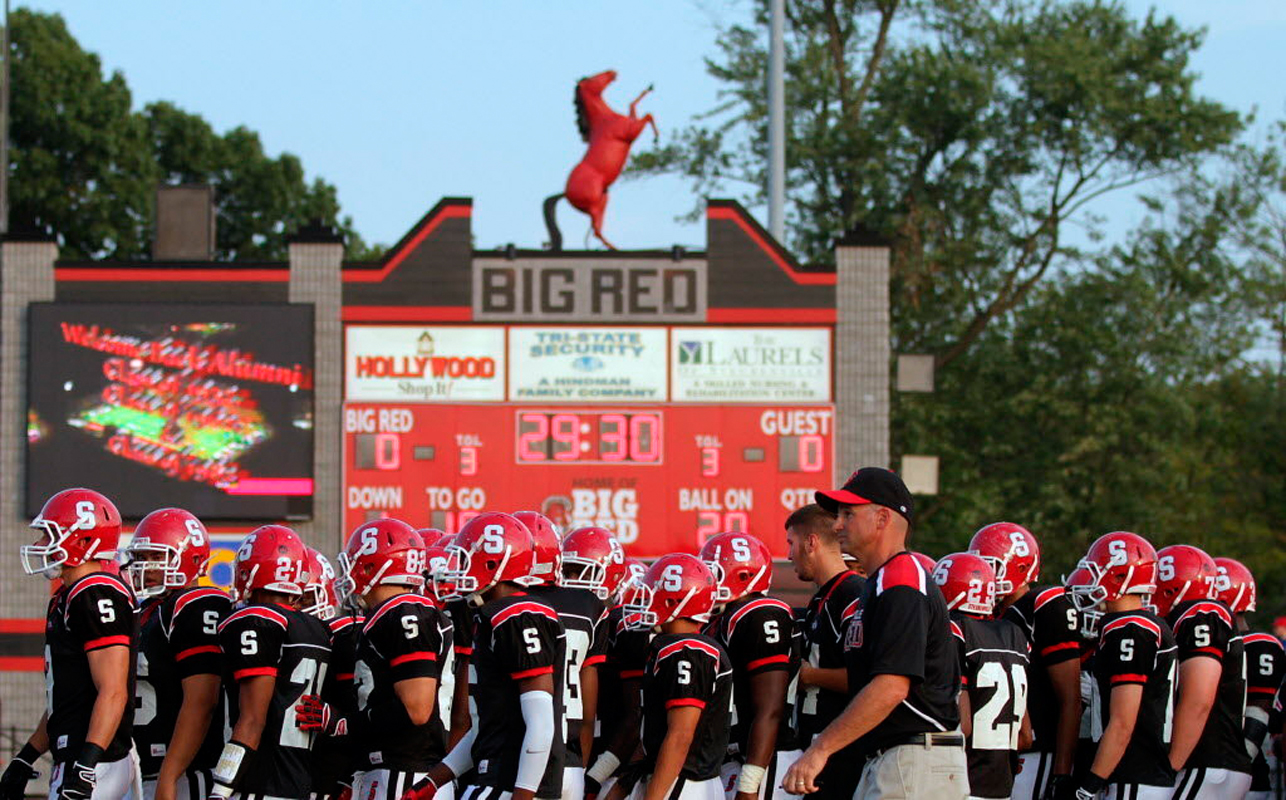 The cast attended Richmond's first football game back at Steubenville High School last summer. They were most disturbed by how much Steubenville seemed just like any other American community. (credit: Flickr Creative Commons)

I do not exaggerate when I say that everyone needs to see Steubenville. Even though the School of Drama’s debut production of this play — conceived, directed, and written by drama masters students — closed this weekend, I have high hopes that Steubenville won’t end here. Not only is it a good show, but, more than that, it’s an important one.

The show dramatizes events surrounding the real-life 2012 sexual assault of a high school girl (referred to throughout as “Jane Doe” or “redacted”) in the small, sports-heavy Ohio town of Steubenville. Jane Doe was blackout drunk at a party when 16-year-old football players Ma’lik Richmond and Trent Mays repeatedly raped her. They proceeded to share texts, videos, and photos of the incident on various social media before Jane Doe herself was aware of what had happened.

The Steubenville case made headlines nationally for months. So, many of you may be familiar with it and as skeptical as I was that a show centered on such a sensitive subject could be at once tasteful and effective. My nervousness abated a good deal when I started worrying about actually being able to snag a ticket, considering all performances sold out within an hour of the box office opening. Little did I know, Steubenville would completely obliterate all of my half-formed expectations.

On a technical level, the show was among the most complicated I have seen. My gaze was immediately drawn to the several television screens directed toward the audience, the onstage camera on its tripod, and the three microphone stands in a line — each of which would play an integral part in the narrative. The multimedia integrated seamlessly throughout is all too appropriate, considering the extent to which the Steubenville case was defined by news coverage and social media.

To this end, heartbreaking text messages between Jane Doe and the perpetrators are displayed in real-time, and the actors assume the roles of television news reporters, re-enacting real commentary on the case. The audience is caught up in a flurry of victim-blaming, misogyny, and ridiculousness; it comes to a head when two male Fox News reporters gang up on a female correspondent, insisting that rapists are a distant, irreformable subcategory of men that women should defend themselves against with firearms. The choice to have technicians operate onstage heighten the intimacy and immediacy that the script already impresses upon the audience.

In its execution, Steubenville is no less than groundbreaking — a feat for which master’s student in directing Eleanor Bishop should take due credit. The “meat” of the show is the trial transcript, read in segments into the microphones with minimal vocal inflection. The clinical text is colored, however, by the actors tossing, crumbling, and otherwise letting each page fall from their hands after it is read. At particularly meaningful lines, they look straight ahead — giving the audience a moment to judge for themselves — and they take a synchronized deep breath. Before long, the audience appears to fall into rhythm and begins breathing along with them. Where the transcript was especially painful, the communal breathing was a comfort.

Equally fascinating is the play’s “Sleeping Beauty” element, which serves as an allegory for the Steubenville case and rape culture in general. The show opens with a lighthearted parody of the classic Disney love song (“One day soon, I’ll find my true love,” etc.). But what starts out as comic relief steadily descends into eeriness as it becomes clear the extent to which toxic ideas about love and sex are deeply entrenched in our society. Even our hallmarks of childhood have been marked with the belief that when the maiden says “no,” she must be chased, and when the maiden is sleeping, she can still be kissed.

Also contributing to Steubenville’s uniqueness are interwoven interviews with a diverse group of female students on love, sex, and feminism. As silent videos of the interviews play for the audience, the actors serve as the women’s voices — mimicking everything from their accents to their facial expressions. Questions such as “Did you have a sexual awakening?” add a fun voyeuristic element to the show; “Do you ever feel objectified?” had every woman in the audience nodding along; and “What would you say to Jane Doe?” gave me goose bumps.

While junior acting majors Zach Fifer and Colin Whitney make vital contributions to a brilliant ensemble performance, junior acting major Molly Griggs should especially be applauded. Griggs’s solo Beyoncé dance number could have been comical or just bizarre, but her barefaced commitment to it really made me believe it was her own personal source of empowerment. I couldn’t help but feel empowered along with her. At one point, Griggs breaks out of the dispassionate trial readings and assumes the role of Jane Doe. Voice breaking, she asks a witness to the crime — someone she once trusted — why he did nothing to stop it. The distinctive sounds of sniffling sounded throughout the audience.

One of the most admirable things about Steubenville is the obvious respect its creators have for Jane Doe. Her rape is never depicted on stage, and the more explicit and gratuitous parts of the trial are purposefully excluded. Trigger warnings adorn every piece of the play’s marketing campaign. Its brochure is thoroughly educational, featuring information and insight on Carnegie Mellon’s own “battle against sexual assault.” Far from exploiting Jane Doe’s trauma, Steubenville alone among heaps of media coverage seems to listen to Jane Doe’s voice, not to mention the millions of women like her.

“I want people to walk away with a more open mind,” said Fifer, adding that plenty of people who think they’re supporting women contribute to a toxic culture without knowing it. “I am part of the culture.... I can help with this, but I can also make it worse.” Fifer wants every woman watching Steubenville to feel “supported and not alone.”

The reason why I wish everyone could see Steubenville is that there is so much to learn from it, especially in a society where feminism is often a bad word and convicted rapists can be back on their football teams within two years. Steubenville’s message — beautifully and innovatively expressed — is more potent now than ever.