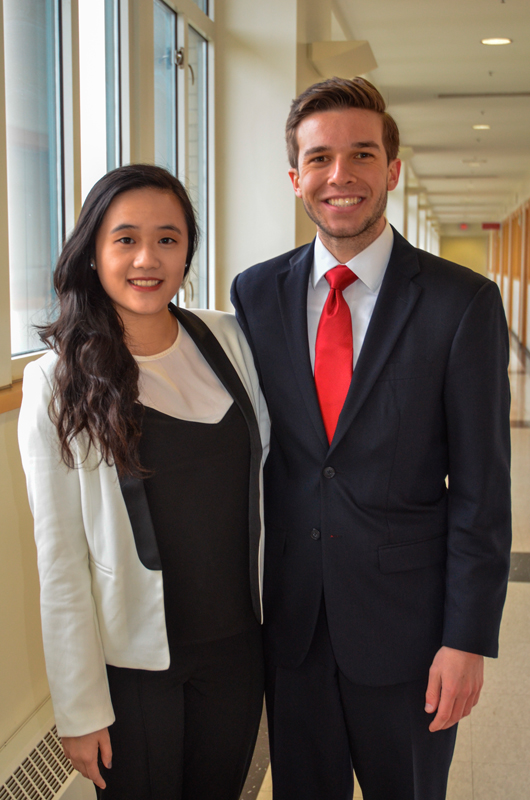 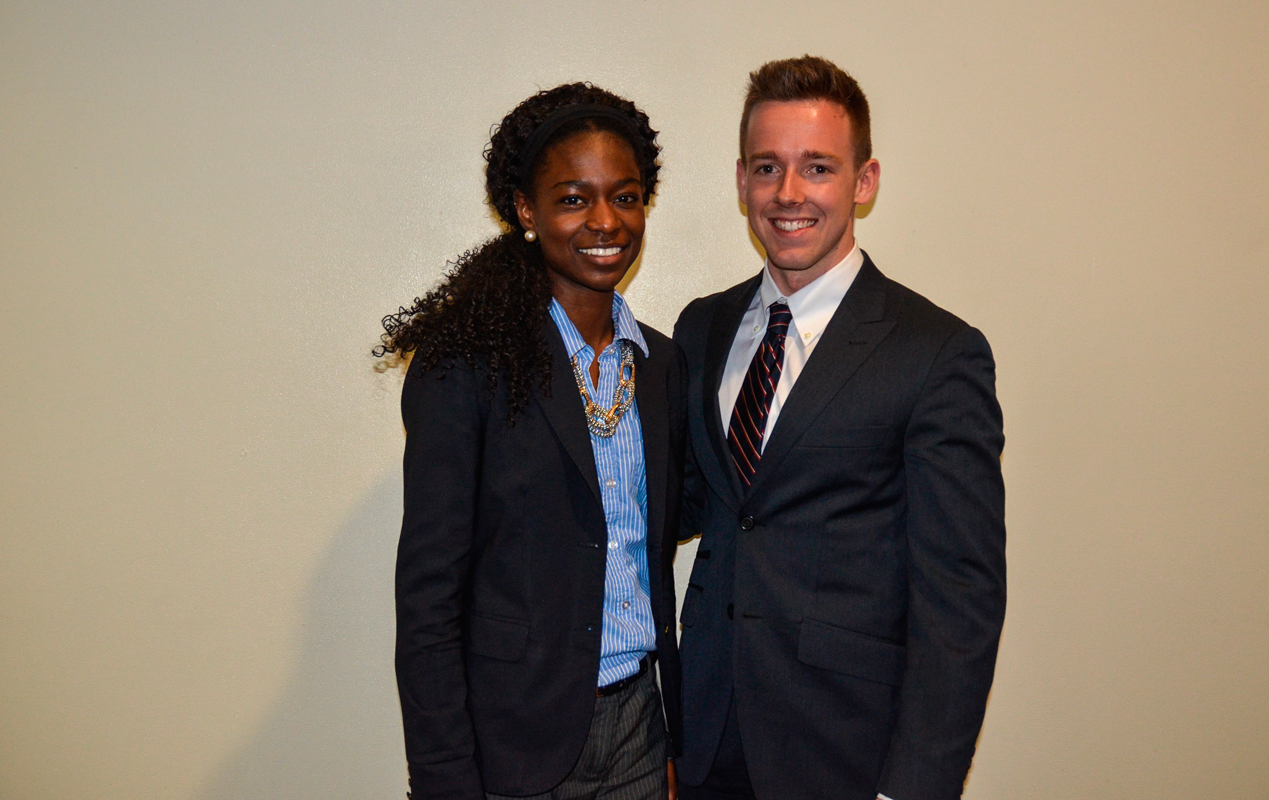 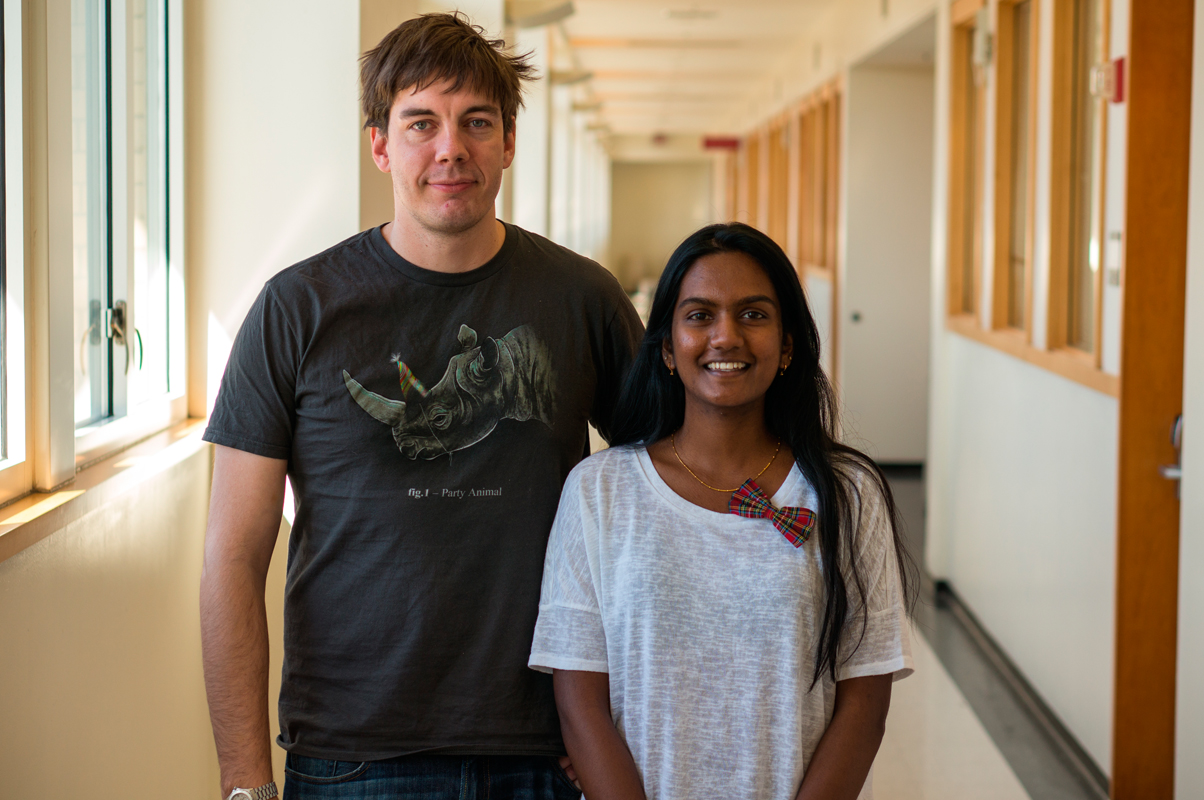 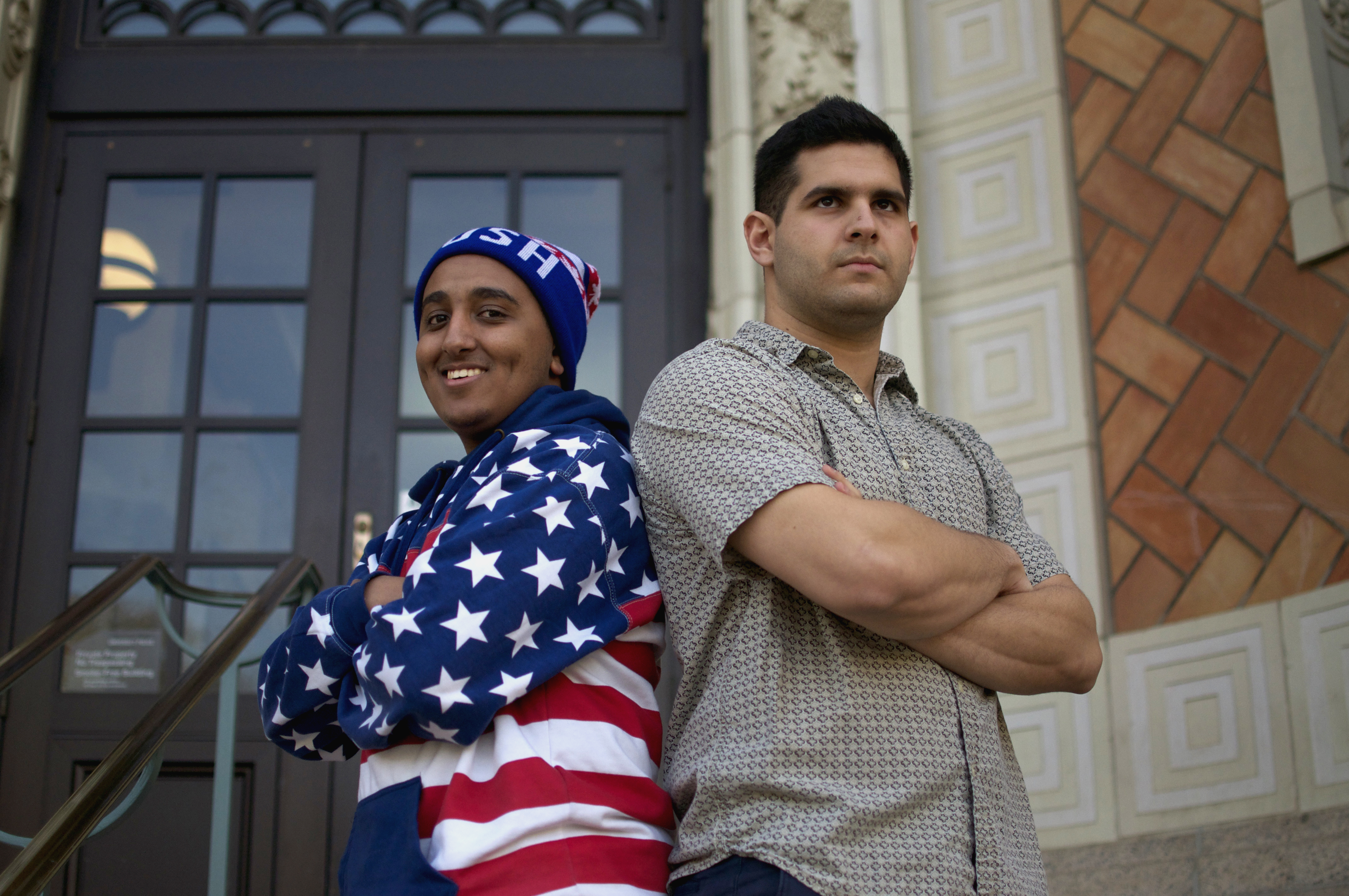 The pair is running on a platform of raising student wages, improving student-faculty connections, and providing more opportunities to experience Pittsburgh.

Wineland and Yang propose to increase the current campus minimum wage from $7.25 per hour to $11 per hour by 2020, citing current hourly rates of $12 at Yale University, $13.25 at Stanford University, and $10 at Harvard University, among others. They argue that raising the wage will allow students to work fewer hours to become more involved elsewhere.

They also propose instituting student-faculty lunch programs, in which students can engage with faculty outside of the classroom. They hope to connect students better to the faculty who teach them by following models similar to those offered at Dartmouth College and Duke University.

Finally, they are pushing to give students more access to Pittsburgh with proposed events like a Craig Street Crawl, similar to the first Senate Strip District Crawl at the start of the school year, as well as routine discounts at various businesses for Carnegie Mellon Students.

“We are the only ticket that can claim that it has made tangible progress on every single item in our platform,” Wineland said via email. “Connie and I have been meeting with students, Warner Hall administrators, and city officials about our ideas since January.... We were pleased that in the debates last Friday, our platform stood out as the only one with clear ideas and concrete plans for execution.”

Wineland is currently the chair of Student Senate and a resident assistant in West Wing. He is involved with the Student Government Executive Committee, the President’s Student Advisory Council, and Highland Ambassadors. He is also a member of the Survivor Support Network and a brother of Sigma Phi Epsilon.

Yang is involved in the current SBP’s cabinet, the CMU math team, Women in Science, the William Lowell Putnam Mathematical Competition, CMU in Haiti, and Kappa Alpha Theta. She is also a GroupX instructor, chair of the university’s Proud to be Plaid committee, and a webpage designer for the Econobite project.

“My experience in Senate and in [Student Government] was perfectly complemented by [Connie’s] background working in the current Student Body President’s cabinet,” Wineland said in the email. “Having very different extra-curricular backgrounds means we’ve connected with a wide diversity of students on campus.”

Wineland has been to the Middle East twice this year, most recently on the IMPAQT Spring Break trip to the CMUQ campus in Doha, Qatar.

Yang likes webpage and app development, math competitions, and did seven years of Tae Kwon Do before coming to Carnegie Mellon.

Kothandapani and Whiting are running on a platform of creating more transparency between administration and the student body, connecting students across majors, years, and clubs, and improving the student experience.

The pair proposes to increase transparency between administrators and the student body by instituting newsletters from Carnegie Mellon governing bodies illustrating such things as renovations, tuition increases, and transportation options. They also plan to publicize initiatives frequently and provide listening opportunities through resources like surveys, town halls, and individual conversations.

To increase connections between students and improve school spirit, the pair proposes improved phone apps and digital calendars for campus events. They also suggest more activities to bring together the entire campus community and more ways for graduate students and undergraduates to have the same opportunities for campus activities.

To improve the student experience and make campus safer, Kothandapani and Whiting, among a number of initiatives, want to begin recognizing non-academic achievements, streamlining student organization and activities processes, and providing more ways for college spirit to permeate across the student body.

They also want all major committees to be focused on both the undergraduate and graduate experience.

“We represent the two largest groups on campus: undergraduates and graduates,” Kothandapani said. “With the varying range of needs and concerns from the graduate population, it is difficult to truly understand the graduate perspective unless you are a graduate student yourself. As a [graduate student], Mark will properly advocate on behalf of this group.”

Kothandapani is currently the student body vice president for finance and contributes to the current student body president’s advisory council and board of directors.

She was previously chair of Senate’s business affairs committee, and is a Mudge House mentor. She is a member of the CIT Community Building Committee.

Whiting is the Graduate Student Assembly’s vice president for finance and the chief financial officer for the National Association of Graduate and Professional Students. He was previously an officer in the Explorers Club and an executive consultant for Public Communication for Researchers.

“We also both have extensive background and knowledge about campus finances and operations at both the undergrad and grad levels,” Kothandapani said. “Understanding how CMU’s finances work, where money can be pulled from, and how to best request funding resources puts us at an incredible advantage.”

Kothandapani owns a farm in India with over 1,200 coconut trees. Fresh coconut water is her favorite drink.

Whiting has traveled to more countries than years the average Carnegie Mellon student has lived. He was born in France, but is Australian. However, he has lived in Korea longer than France or Australia.

They are running on a platform focused on creating a more inclusive campus culture to represent all 13,000 students on campus, and help set the school on the path to being widely considered equal to other large name universities both inside and outside of the Ivy League.

“Our platform is also long term and short term. We believe the university is at ... a turning point in its history,” Marshall said. “It could become a household name. This is a focal year — this is a year where Student Government and the student body are going to determine if we get on that path.”

“We really centered our platform around where we believe this campus can go,” Ayo-Ani said of their goals. “We really want to provide a very deliverable platform.”

Based on the phrase “Reorient, Empower, Serve,” their goals include creating a “Reorientation Day” where students would take a day off from classes toward the middle of the semester. The day would be used to promote mindfulness and allow students to reflect on their time at the school.

Other key planks of their platform include an increase in the frequency of the school’s shuttles and more routes taking students to more regions of the city.

They also want to expand the number of businesses that accept DineX, and emphasize the need for more collaboration and student representation, as well as mental health awareness and measures to combat sexual assault and relationship violence.

Marshall led the founding of Carnegie Mellon’s Phi Delta Theta fraternity and served as president, which he says has given him leadership experience: “I worked with a bevy of people, students, advisors, professors, and some members of the larger Pittsburgh community. And I was able to get a real sense for the pulse of the campus. Every college is represented in my fraternity — international students from all over the world. I think that’s the most important portion of leadership.”

He has also served as chief of staff for the SBP for the past two years, which he says has given him first hand knowledge of what the position can and can’t do.

Ayo-Ani’s experience stems from being both a resident assistant and a member of the Delta Gamma sorority, serving as the vice president of the Pan-Hellenic council. She said “I’ve been practicing [listening to students] for the past two years.”

When asked why they felt they should run, Marshall said, “For me, it was a culmination of two and a half years of Carnegie Mellon, of being somebody who is a multidisciplinary student…. I’m really invested in this community and it would be a great omission to not put myself forward to make this happen.”

“This university has given us the world and we intend to do nothing less than give back to this community,” Ayo-Ani added.

Ayo-Ani used to be on a National Champion jump rope team, and will be offering a StuCo on it in the future.

Marshall is a lifelong Pittsburgh Pirates fan and secretly a tap dancer.

According to the pair’s website, which is stylistically almost identical to Wineland and Yang’s, the opposition that Jedidi and Debebe intend to decimate comes from wild life, student-faculty connections, and corruption. According to their website, they hope to hire 38 poachers to protect students from campus wildlife, create a program for students and faculty to have lunch, and make it easier for students to bribe professors and administrators.

When asked what sets them apart, Jedidi said via email, “I am by far the most qualified candidate for this position. For one, I am a graduating senior, whereas the other candidates are all juniors or younger. Vis-à-vis, furthermore, concordantly, I am older than them.”

“I think we care about how students feel,” Debebe said. “We’re not looking to make monumental changes in the Student Government. We’re looking to look out for our fellow students.”

Debebe made an earnest case for the platform, saying that one of the largest barriers on campus is the connection between students and faculty: “At the moment, it’s very difficult to reach out on a personal level. If we could give students a means of meeting up with teachers in a social setting — getting lunches, meeting at events — I think that would contribute to breaking down some of those barriers.”

Debebe indicated that student safety — and not just from bears — is at the moment a major issue: “I don’t think a lot of students feel safe on campus. You hear a lot of things about sexual assault and suicide, and I think in general people in Pittsburgh don’t feel safe. Saif and I are people who can really make students feel safe.”

He also believes that one of the largest issues with the current Student Government is a lack of transparency and accessibility for students: “I for one don’t really know about what happens on a case-by-case basis. If I got into office, addressing that would be something at the forefront of my agenda.”

While it is unclear what will happen if a graduating senior is elected, the current election rules allow any graduate or undergraduate student currently enrolled at Carnegie Mellon to run for elected positions. Jedidi’s senior status, as well as the campaign website, have led to speculation that their campaign is not a serious one. Their platform promotes poaching and bribery, and their campaign staff includes such members as Helga G. Pataki from the cartoon Hey Arnold!, Al Gore, and “All Sea Creatures.”

Jedidi emphasized being a senior in an email when asked what sets him apart from other candidates: “I would just like to emphasize again that my experience extends all the way to my senior year of college,” he wrote. “I am essentially done with my degree at this point, and will be leaving CMU in just a few months to become a real person, whereas all the other candidates will still be students next year. Does CMU really want someone who is still a student to be the Student Body President?”

Fun Fact
Jedidi and Debebe have the exact same cadence and number of syllables in their names, so they’re easy to beatbox together, like in the recording on their website.