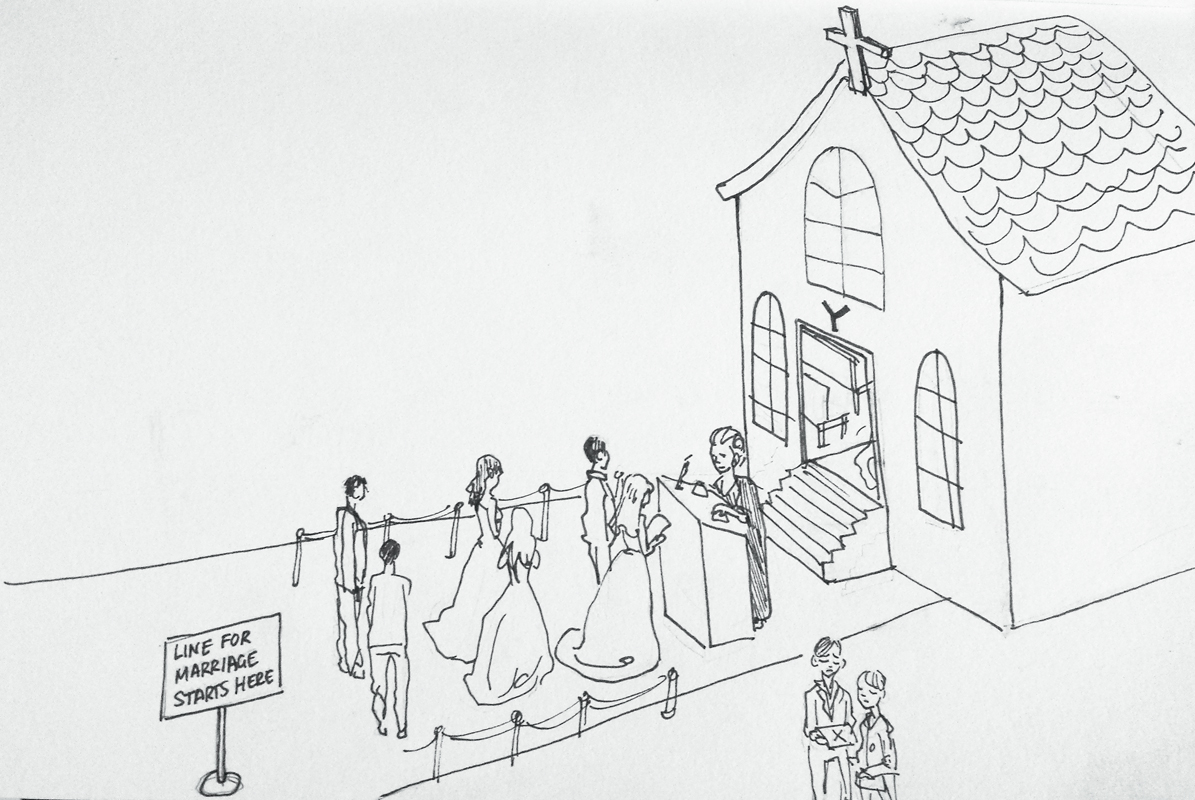 Oklahoma marriage law is absurd (credit: Eunice Oh/)
Editorials featured in the Forum section are solely the opinions of their individual authors.

Despite the fact that our nation continues to move closer to marriage equality and increased personal freedom, Oklahoma's House voted to pass one of the largest attacks yet on the LGBTQ community and nonreligious citizens.

Moving on to the state Senate for approval, this bill would restrict the performance of marriage ceremonies to judges, retired judges, and clergy. This would put county clerks out of business and make citizens dependent on clergy to perform most marriages. Not only is this law against the very ideals our nation was founded on, but it is a direct attack on individual groups of citizens.

This bill was a last attempt from Oklahoma conservatives to keep same-sex marriage out of their state. The sponsor of the bill, Representative Todd Russ, even stated that it was in response to marriage equality laws "stuck down [their] throats" by Congress. There is no logical reason to restrict marriage to being performed by clergy, and if passed by the Senate, the bill is bound to make its way to the Supreme Court in no time, after the state was already forced to allow same-sex marriage by the federal government.

The United States was founded on the idea of separation of church and state. A backer of the bill, Representative Dennis Johnson, states that, "Marriage was not instituted by government." He is entirely correct. However, inheritance laws, tax benefits, and other laws dictated by marriage were instituted by the government. Giving these benefits to only those with marriages recognized by clergy directly integrates religion into the government.

Ideally, no such federal marriage regulations would exist. People would be free to perform their own marriage ceremonies and share property and benefits with whomever they pleased. However, we do not live in this ideal world, and thousands upon thousands of pages of laws are dependent on marriage as a system of classification. Therefore, when clergy give a marriage license, they are also giving a voucher to all of these government benefits.

Despite the fact that this law is just utterly ridiculous, it does have one pretty great side effect. Ironically, by passing this law, the conservatives of Oklahoma are indirectly legalizing marriage equality in their state. In no part does their law mention that same-sex marriage ceremonies cannot also be performed by clergy. This has caused people to jump into becoming registered as clergy, which will most likely cause a spike in same-sex marriages carried out in the state.

It is hard to believe that in 2015 states are still passing laws that integrate religion and government in ways that our Founding Fathers feared greatly. Yes, religion is a very important part of our society and, for many of us, who we are as people. However, when religion is mixed with government in a way as hateful as this bill proposes, it defeats the reasoning behind religion: to bring people together and bring meaning to their lives. Government and religion must remain two distinct and separate entities, as beliefs vary by person and dictating others based on one group's views is destructive to society.

Citizens should be free to hold private marriage ceremonies free of government regulation, and should not be forced to be a member of a religious community to get their marriage identified by the state. While in the end the flaws of this bill will signal a win for marriage equality, the ideas from which this bill stemmed are backward thinking in nature and destructive to the progress of social freedom.