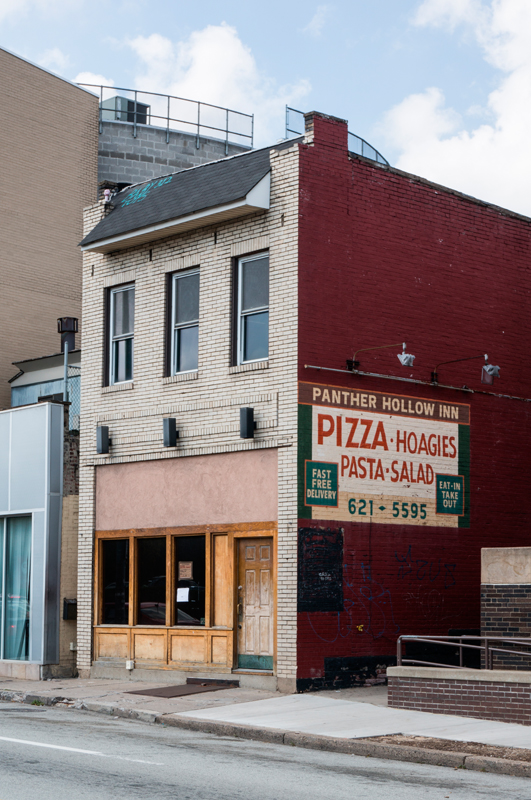 4611 Forbes Avenue — formerly the location of the Panther Hollow Inn — is the subject of plans filed with the Pittsburgh Department of City Planning to build a Chipotle Mexican Grill. (credit: Abhinav Gautam/Photo Editor)

Students said goodbye to the Panther Hollow Inn, a popular bar for the campus community located at 4611 Forbes Avenue that closed its doors for the last time at the end of the last academic year.

Since that time, the building has been gutted. The view from the street shows the bar and booths gone and the tiles torn out. An old mural on one wall, revealed by the removal of drywall, shows handpainted banners from both Carnegie Mellon University and the University of Pittsburgh.

Despite a prior application approved by the Department of City Planning for renovating the property, which indicated that work would be completed in time for an occupancy date of Jan. 15, the building has stood empty since that date, with no obvious signs of further renovation or construction.

A more recent application, if approved, will have the building demolished and an entirely new Chipotle restaurant built on the lot. The proposed process, according to the filed plans, will take from the first of May to the first of September to complete, and is projected to cost $500,000.

Chipotle Mexican Grill is a popular choice for students on campus, so much so that a nearby location at 3619 Forbes Avenue, just minutes away from the new site by either foot or bus, is looking forward to opening day.

“I think it’s going to be really good,” Stacey Mermigos, a part-time manager at the 3619 Forbes Avenue location and a junior student of psychology at the University of Pittsburgh, said of having another location so close. “Right now we’ve got students from CMU and Pitt and Carlow, as well as all the workers from the hospital, and I know it’s frustrating for customers to have to wait.… It’ll be good for the CMU students, but it will also take a lot of pressure off of our store and our crew.”

Student reactions to the development are generally positive.

“I think it’ll be nice to have one closer to here since the one in Oakland is always so crowded,” said Jasio Santillan, a first-year materials science and engineering and biomedical engineering double major.

Senior dramaturgy major Rachel Abrams said, “Knowing how popular Chipotle is, they’re going to make a lot. It’s probably going to be a successful business venture, but at the same time a lot of people miss PHI. A big contingent of students really loved it. As for me, I’m graduating, so I don’t really care as much.”

The construction is being run by Pittsburgh company Winthorpe Valentine, LP. The phone number for Winthorpe Valentine listed on the form appears to be incorrect, and the project’s listed architects, Morgan Architecture + Design, could not be reached for comment.