Buzzfeed is not end of journalism, but its new beginning 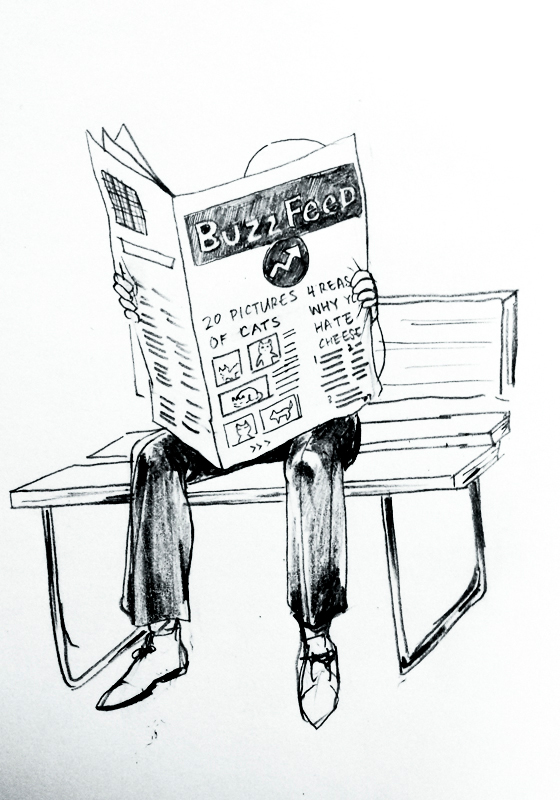 Buzzfeed is not end of journalism, but its new beginning (credit: Eunice Oh/)
Editorials featured in the Forum section are solely the opinions of their individual authors.

The practice of journalism encourages cynicism. Journalists internalize a philosophy of "question everything; trust no one; dig up the muck," which suits their vocation well enough on a day-to-day basis, but promises storm clouds and hellfire for the future.

The common assumption is that journalism is dying. Revenue and circulation of print newspapers are at an all-time low and declining, especially since their core readership (the 55+ crowd) is literally dying off. Established "legacy" news sources are downsizing their offices and laying off staff, forced to compete for the public's limited attention with the blogosphere — their arch-nemesis. According to the cynics, the Internet itself sounds the death knell of "true" journalism. Everything from discussion boards to Twitter feeds to especially Buzzfeed is a fatal threat signaling that people have forgone hard-hitting, unbiased, well-sourced journalism for its polar opposite: a discordant McFlurry of untrustworthy voices with click-bait fluff sprinkled on top.

The picture may not be so bleak as it originally appears. Maybe sites like Buzzfeed are the future of journalism, but is that really the end of the world?

Buzzfeed calls itself a "social news and entertainment company" with "the most shareable" content that's "redefining online advertising with its social, content-driven publishing technology." Buzzwords aside (let's pretend that pun was intentional), its business model is innovative and overwhelmingly successful. The site has had over 13 million unique visitors in the last 24 hours alone, compared to [ITAL]USA Today[ITAL], the top United States newspaper in combined print and digital circulation, which has a 3.3 million daily circulation. Buzzfeed is also valued at $850 million, with a projected 2014 revenue of $120 million.

Over two-thirds of revenue in the news industry comes from advertising, but one of the reasons Buzzfeed is so profitable is because it has mastered the art of native advertising, or creating ads disguised as original content. If innovation in advertising is essentially finding new ways to trick consumers, native advertising is the Frankenstein's monster of innovation. It's smart (while less than .1 percent of site visitors are dumb enough to click on a banner ad, a much larger percentage will read an article entitled "Which Food Network All-Star Would Be Your Mentor?" (sponsored by Buzzfeed's "Publishing Partner," The Food Network), and it may even be designed to be beautiful (like this hilarious cat litter ad), but it's is also more than a little terrifying.

John Oliver gives a thorough run-down of the risk native advertising runs in breaking down the wall between the business and editorial ends of the news industry that is integral to the journalism's integrity. However, as long as ads are clearly recognizable as ads (via appropriate labeling and disclaimers), and as long as their quality stays comparable to organic content, it's possible that native ads might be a win-win situation for both producers and consumers of news media. If no one is willing to pay for news in the digital era (and they're really not), then native advertising seems to be the most entertaining, most sustainable incarnation of a necessary evil.

In addition to having such a solid source of revenue, Buzzfeed has also harnessed the Millennial generation more successfully than any other news media. 50 percent of the site's visitors fall within the 18-34 demographic, and considering that 68 percent of Millennials get news primarily from social media, it's unsurprising that 50 percent of Buzzfeed's traffic is mobile and 70 percent is from Twitter, Facebook, YouTube, and so on.

Buzzfeed's series of YouTube channels are almost a separate entity, posting infuriatingly entertaining, "tasty" videos several times weekly (I particularly recommend "Guys Try On Ladies Underwear for the First Time" and that series of people tasting gross things). Scoff all you want, but Buzzfeed's YouTube has attracted 9 million subscribers and 500 million monthly video views (doubtless earning Buzzfeed a pretty penny in addition to its advertising revenue). Buzzfeed also has a tech team of over 100 (one-fifth of its total staff), further emphasizing that the company has directed its priorities toward the future. Holding the secret of infinitely shareable content in the palm of its digital hand, Buzzfeed has made itself ubiquitous (to college students at least).

Of course, the biggest objection to Buzzfeed as a model for journalism's future is the fact that, well, it's all meaningless clickbait junk, isn't it? But that's not exactly true. While the lists of "relatable" Taylor Swift and cat gifs may keep it popular and profitable, Buzzfeed has increasingly focused its resources on serious journalism. It has made a habit of hiring away celebrated journalists from established papers, including current Editor-in-Chief Ben Smith from Politico and Pulitzer Prize-winning ProPublica reporter Mark Schoofs. News articles take up a decent chunk of Buzzfeed's homepage and the Buzzfeed News page is cleaner and better organized than that of The Huffington Post.

Additionally, Buzzfeed has committed itself to diversity, with an impressive near-even gender divide across their staff and the stated goal of improving their racial demographic through "aggressive hiring." By highlighting and amplifying minority voices, Buzzfeed is able to consistently produce content more interesting, original, and relevant to a younger demographic than that of many established news media sources (staffed primarily with middle-aged, heterosexual, white men).

Buzzfeed is innovative, highly profitable, and — believe it or not — it may just be the future of journalism. If everyone decided to be a little less pretentious, that may not be such a tragedy. Personally, I like to top off my in-depth news pieces with a few cat videos.