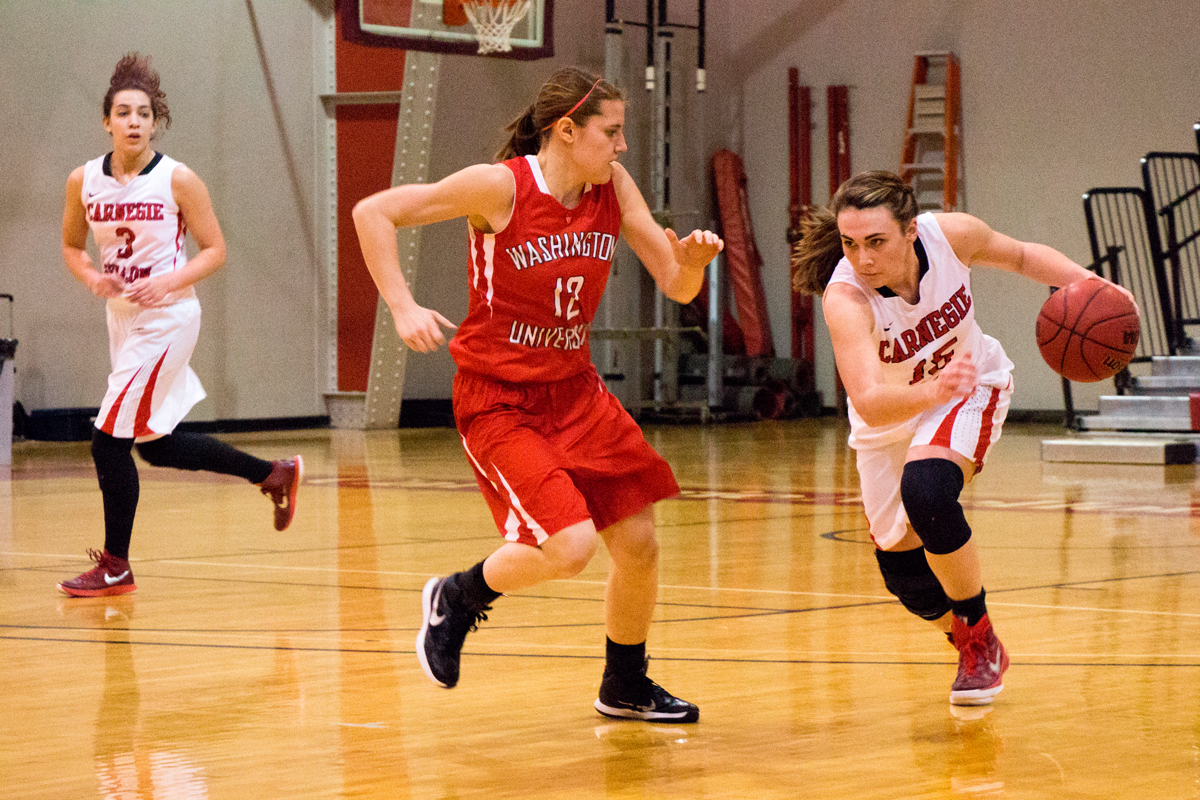 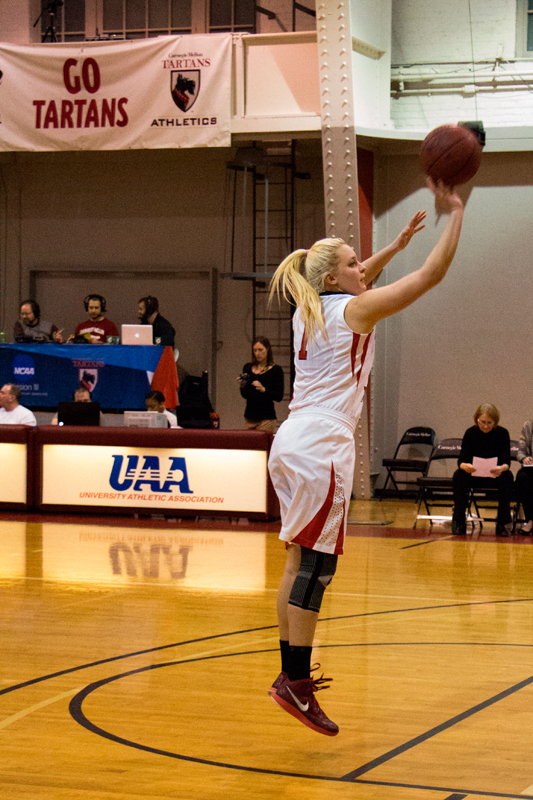 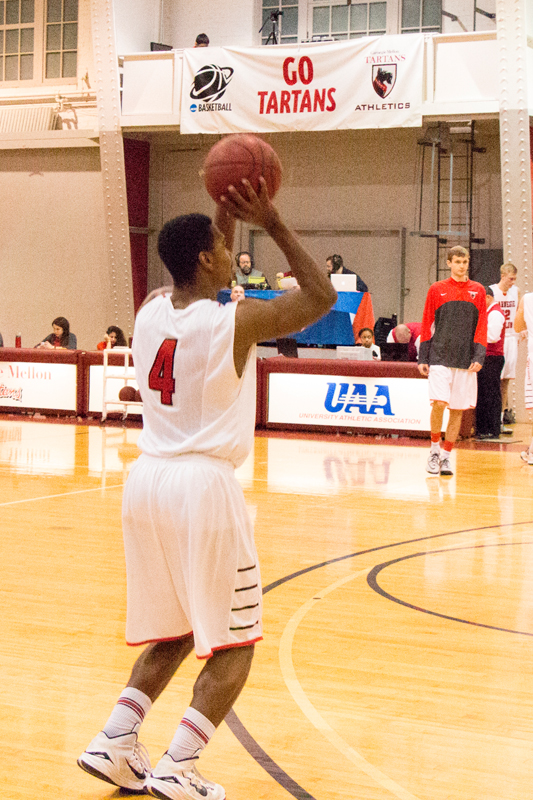 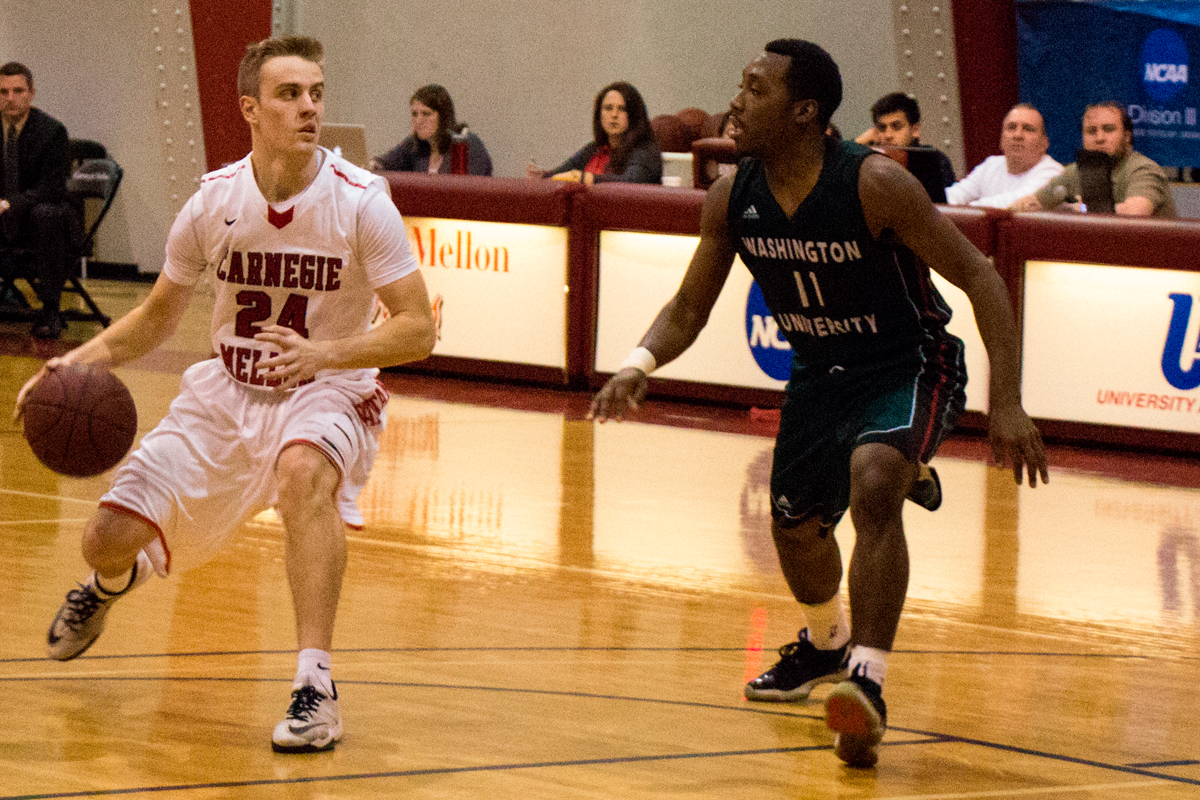 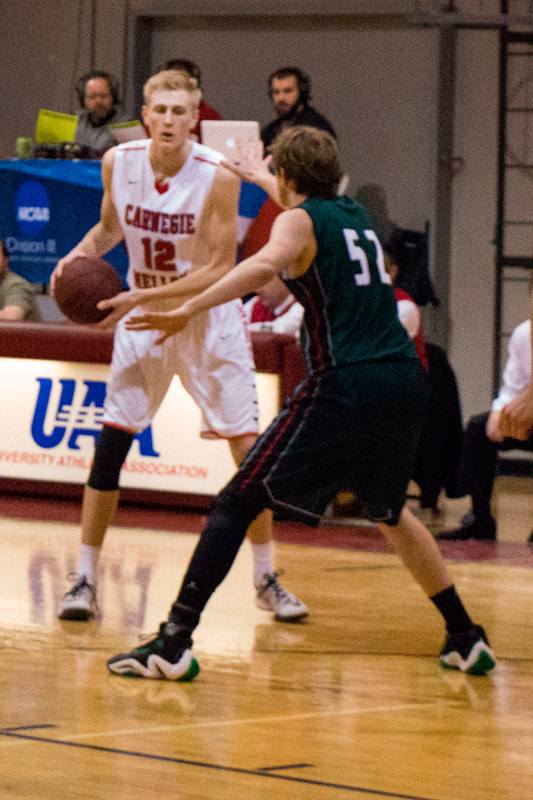 The Carnegie Mellon’s women’s basketball team had a very atypical start, compared with their previous home games of the season, in their game against the Washington University in St. Louis Bears. The Tartans struggled to find a rhythm offensively, and were baffled defensively by the Bears’ ball circulation. This led to an early lead for the Bears, which they would hold on to for the rest of the game. The pace of the game was alarmingly high, with some great hustle plays from both teams. Washington University played a full-court man-to-man defense while the Tartans stuck to a more conservative zone defense. The Tartan’s lack of depth in their bench became clear as their starters began exhibiting signs of fatigue midway through the game.

Carnegie Mellon’s sophomore center Lisa Murphy started and played the whole game alongside senior guard and captain, Chandler Caufield, who only took to the bench for a minute during the game.

This game was one of the rare occasions when Murphy was overpowered when rebounding, and only managed to grab 7 rebounds during the whole game. The Tartans were struggling to move the ball around in the first half which led to multiple interceptions and forced mid-range shots. However it also opened the floor for some brilliant individual plays by junior guard Lindsay Poss and Caufield, both of whom were unstoppable from behind the arc. Poss shot an amazing 4–5 from three-point land and Caufield was not far behind, shooting 4–6. Towards the end of the half, the Tartans began to fight back with multiple scoring runs each cut short by the Bears’ timeouts, which successfully killed the Tartans’ momentum.

At the start of the second half, the score was 43–24 with Carnegie Mellon trailing. Washington continued their penetrating offense and exploited the Tartans’ 2–3 zone. Their offense was systematic: make continuous circular passes until the Tartans’ zone is scrambling and then get into an open position for a mid range jumper or a drive to the basket. Unfortunately for Carnegie Mellon, the women from Washington could not miss from mid-range as they kept expanding their lead, as shown by the night’s shooting stats. The Tartans shot a brilliant 12–21 from three point land but were restricted to 10–33 on shots inside the arc.

Washington could not match Carnegie Mellon’s three-point barrage, and had a skimpy 7–20 on three-pointers but more than made up for it with an average of 21–40 from the field. The mid-range jumpers were the source of difference between the two teams in this game.

As the second half went on, Carnegie Mellon’s women were giving everything they had to find their offensive stride, but kept falling short with forced shots and incomplete plays.

Disheartening as those misses were, it seemed that the Tartans were beginning to get into a passing groove as they finally seemed to be finding the space that had been eluding them all game long. Recognizing that the zone defense was causing bad double teams and a plethora of open spaces, the Tartans shifted to a more arduous man-to-man. This made a huge difference for the Tartans as it forced fewer double teams and made the Bears work for their baskets. The Bears could no longer find open jumpers by just passing the ball around and had to move without the ball to get into scoring positions. The Tartans persistence was starting to pay off as they improved their conversion rate late in the second half and started rallying behind Poss’ prowess. Kudos to the Tartans for their spirit to fight back and not lose hope (a quality that is much valued and needed at this university). They managed to close the lead to 10 points and ended the game 61–71. Poss ended the game with a team high 18 points with Murphy and Caufield both notching 12 points apiece.

This game may have been a hard loss for the Tartans’ women, but there were bright spots for them that show great improvement: They finished strong (outscoring the Bears 37–28) — something that has been lacking from their previous home games. They were also able to hold confidence in the their shooting and improve it mid-game — something that even professional athletes struggle with. This loss drops the Tartans to 11–8 for the season.

The men’s basketball game started off much slower than the women’s, with both teams struggling to settle offensively, resulting in premature shots and unwise passes. Senior guard and captain Seth Cordts would lead the Tartans from the front by scoring the first basket for the trailing Tartans. This was followed swiftly by a three pointer from behind the arc by junior center Blake Chasen, which gave Carnegie Mellon its first lead of the game. The pace started to pick up around seven minutes into the game as both teams started to spread the floor more effectively, getting into open spaces and finishing with good jump shots. The Tartans squandered their lead only once when the game was tied at 7–7, but never let up after that. The Tartans played a full court man-to-man which they carried through with tremendous vigor and stamina. Midway through the first half, sophomore forward Jack Serbin exploded, knocking down everything from three pointers to baseline jump-shots, even finishing at the basket from time to time. His teammates exhibited a similar range as well, scoring from all parts of the court (something their female counterparts were unable to do). The Tartan’s big men exploited their size advantage and crashed the boards on defense while posting up beautifully on offense.

The Tartans were active on both sides of the floor and played a solid defense, taking away passes and forcing the Bears to work for the basket or give the ball up. Cordts was struggling to find his shot from behind the arc but more than made up for it on defense by staying in front of his man through multiple screens on every play. There has never been a more appropriate use of the word suffocating than in describing the Tartans’ defense.

They pressured their rivals continuously playing a tight defense and taking away every opportunity the Bears tried to create. This helped the Tartans cause multiple turnovers but took away their offensive prowess as they slowed their pace. Cordts may have not had the best night from three point land, but the Bears made up for it by sending him to the line multiple times during the game — and Cordts doesn’t miss from the line. He ended the game shooting 14–14 on free throws with Carnegie Mellon as a whole not far behind with 18–19 — talk about focusing on fundamentals. The half ended with Washington getting the ball to their post players for some tactful lay-ins, shortening the Tartan’s lead to 30–22.

Although the first half ended with Washington threatening to overtake Carnegie Mellon, from the very start of the second half the Tartans dispelled any chances of that happening and were on fire with Serbin making three after three on back to back plays. If that wasn’t enough, Cordts ignited the court and the crowd when he ran from being knocked to the floor to put back one of Serbin’s rare missed threes. The tired Tartans that closed out the first half weren’t the same men in the second half. These men in white were on a mission, and they put their heads down and went to work. Sophomore center Chris Shkil was crucial in helping the Tartans run away with the game by being unstoppable in the paint and coming through at crucial points in the game.
Washington tried to mount a comeback several times during the second half, but that backfired as it sent Cordts to work, scoring and assisting on multiple drives from the field. The Tartans were united in arms, played great team basketball, and expanded their lead to 21 points with 16 minutes left in the game. The Bears’ point guard used his speed and court vision to get Washington a few open shots, but Washington’s conversion rate was falling as Carnegie Mellon’s rose. In the second half, the Tartans shot 14–27 from the field while Washington was held to 12–26. Carnegie Mellon had a few defensive lapses late in the second half that lead to easy buckets for the Bears and gave away two steals that led to Washington fast breaks towards the end of the game. Normally, that would be enough to tip the momentum in favor of Washington, but it was Carnegie Mellon’s consistency and levelheadedness on offense that made sure that the Bears never saw the light of day. The game ended with the Tartans winning 72–59, and the crowd erupted, applauding the men as though they were heroes returning home from war. And indeed, with the exception of sweat instead of blood, they were heroes and they defended the battlefield of Skibo admirably.

Kudos to the three horsemen — Cordts (22 points, a game high), Serbin (21 points), and Shkil (17 points) — that led the Tartans to their victory. Free throws, three pointers, and post work: These men had it all, and were supported thoroughly by their teammates.

For in the end, it was Carnegie Mellon’s distribution of dependence and unity that won the day.