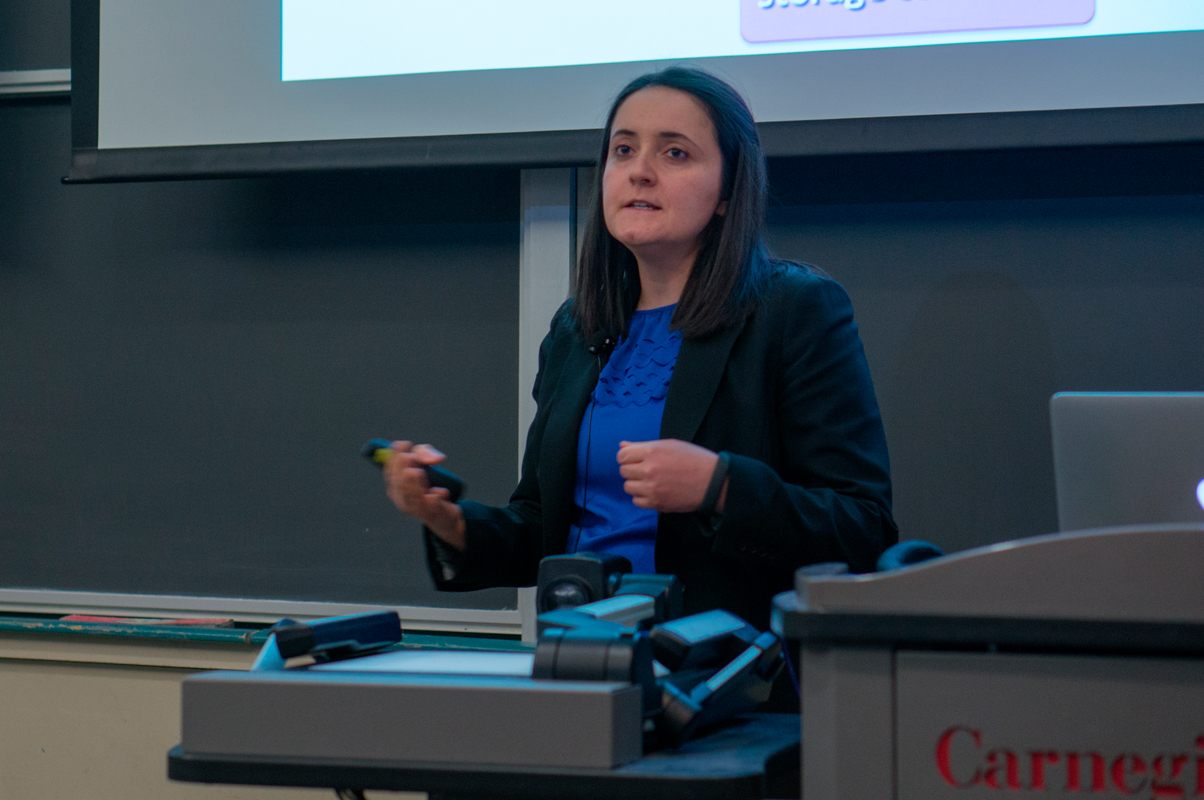 Mankind has come a long way from communicating through landlines, to using smartphones for communication, information, entertainment — you name it. Now imagine your smartphone, already capable of so much, functioning on a power supply equivalent to that used by a light bulb. Then imagine it performing computations at a rate equivalent to the human brain, with comparable artificial intelligence. This technology is en route to becoming a reality right this minute, in the Litt Lab of University of Pennsylvania.

Duygu Kuzum, a postgraduate in electrical engineering from Stanford University, is conducting groundbreaking research in the field of neuroengineering, using what we know about nanoelectronics to simulate the chemical reactions that go on inside our brains.

Last Tuesday, Kuzum was invited to Carnegie Mellon to speak about her current research as part of a seminar series hosted by the Biomedical Engineering Department of the Carnegie Institute of Technology (CIT).

Recognized by the MIT Technology Review as an innovator under 35, Kuzum captivated her audience when she talked about how drastically her research could change the world we live in, in only a matter of years.

She began by talking about humankind’s fascination with the human brain and by questioning the concepts of perception, curiosity, intelligence, and the brain’s ability to store and process new information. According to her team, the world has got it all wrong. “Instead of trying to understanding the power of the mind, we need to understand how the neurons work,” Kuzum said. Her reasoning is simple: Just as a strong building needs a strong foundation, the secret behind the remarkable operation of the brain lies in the neurons.

Kuzum’s team is currently working on two projects, including synaptic electronics for brain-inspired smart technology, and using the material graphene to build sustainable devices which can better help treat and detect neurological disorders.

Synaptic electronics, according to Kuzum, is one of the most innovative ways of simulating the brain without using as much power as a nuclear power plant.

Taking her cue from how neurons communicate within the human body (primarily through synapses, which are connections between neurons through which information flows from one neuron to another), Kuzum’s team has manufactured synaptic nanoelectronic devices which are capable of storing, processing, and relating information at the same speed as somatic neurons and at about one millionth of the power produced by a nuclear power plant. However, there is still a long way to go. These nanochips, consisting of nanoelectronics representing close to a million neurons, still need to be trained to create new intelligence, instead of only acting on learned material.

Kuzum’s team is also focusing on using graphene to build and simulate brain tissue, which can help scientists better understand and determine the cause of various neurological disorders and provide a solid foundation for future treatments of those disorders.

Graphene is a thin layer of pure carbon, the atoms of which are tightly bound together in a honeycomb-like lattice. The material’s structure, according to Kuzum’s work in lab, has properties which enable scientists to observe brain signals and patterns with minimal noise, helping optimize their results. In addition, graphene is extremely flexible and resistant to corrosion, proving useful in the production of surgical electrodes, which can be inserted within the cranium to simulate damaged brain tissue or even to track disorders such as seizures.

The use of nanoelectronics in the production of synaptic electronic devices and the use of graphene to simulate brain tissue can completely revolutionize mankind’s attempt to create artificial intelligence equivalent to — even surpassing — the human brain. So far, the use of graphene has helped scientists observe patterns in neural signaling, but the material’s capabilities combined with nanotechnology gives us hope that very soon we will be able to understand and combat disorders like Parkinson’s disease and Alzheimer’s.