The future of The Daily Show without Jon Stewart 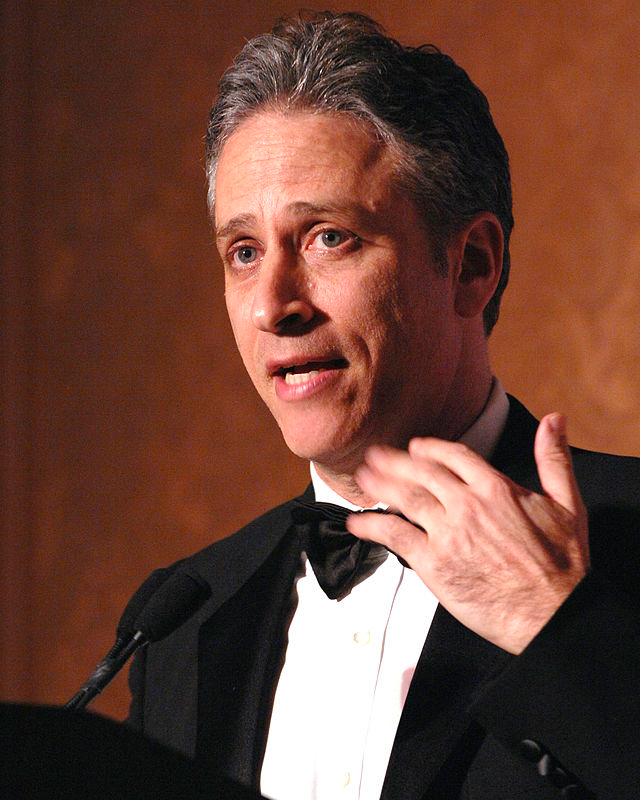 Jon Stewart plans to spend more time with his children and on other projects after ending his tenure at *The Daily Show.* (credit: Courtesy of Spellcast via Wikimedia Commons)

A TV program that has spawned three separate spin-off fake news TV programs is now desperately trying to save itself after Jon Stewart announced that he would be leaving his gig hosting of the program. His reasons for leaving the show after 16 years of manning the desk are related to his need for flexibility with his schedule. He has said that he needs to make more time for his family and that he wants to focus his efforts on his children for the next few years. He has explicitly said he is not retiring; he has been a producer for the show for a long time and he is likely staying on in that role. He is not the first host of the program and will not be the last, and Comedy Central is actively seeking a new host for the program. The network had to deal with a similar situation in the recent past after The Colbert Report ended when Stephen Colbert (an alum of The Daily Show) left to host the Late Show on CBS.

Many different contributors to The Daily Show have gone on to host their own shows that focused on the same, or similar, topics, such as Stephen Colbert, John Oliver (with HBO’s Last Week Tonight,) and now Larry Wilmore (with the new The Nightly Show with Larry Wilmore on Comedy Central). It is ironic that the show is looking to find a new host after losing two potential hosts (Oliver and Wimore) less than a year ago. Still, various outlets have been speculating on who might replace Jon Stewart. These possible replacements include many high-profile names in media as well as current contributors to the show and writers for other programs.

Most outlets have focused on Jessica Williams as a possibility for hosting the show, but through a series of Tweets (@msjwilly), Williams denied that she would be hosting and said that at this point in time she was under-qualified for the job. Although some people are disappointed that she would not host the show, it is true that she is very young and could go for it later in her life. If The Daily Show were to hire her as host, she would be the youngest host of any late night television show, and she would be the only woman in the late night arena.

If Jon had left the show, Seth Meyers might have been the person I would have seen manning the desk; however, since he is the new host of Late Night at NBC it is safe to assume he will not be asked to host The Daily Show. Meyers is just getting used to hosting Late Night and will continue to adjust, just as Fallon did before him. I would have also been looking at past Weekend Update anchors since they have experience with the style of comedy and could bring in a new style for the show, but Jimmy Fallon is hosting The Tonight Show, Amy Poehler is finishing Parks & Recreation, and Tina Fey is busy with Unbreakable Kimmy Schmidt, the new Netflix comedy she’s developing. The nature and complexity of The Daily Show calls for writers that are experienced with writing political comedy on a daily basis, a difficult task not everyone can handle. The team of writers for the show is not changing, so it should remain consistent with the new host, but the host does contribute to the format of the program and has the tough task of delivery.

With all the names being presented as possible hosts for the show, I think the possibility of having co-anchors or an interim host in order to assist with the transition process is very likely. One possibility is Brian Williams now that he has been suspended for six months from NBC. The idea of having an experienced and respected anchor of one of the highest rated news programs in the nation go to Comedy Central to host a satirical news program is unconventional and is not something that most people would think of. However, Brian Williams has been a guest on the show many times, is the only news anchor to ever host Saturday Night Live, has slow-jammed the news with Jimmy Fallon, and has been a guest for countless other TV sitcoms; he has all the qualities one would need for hosting the show and would be able to give Comedy Central the time it needs to find a more permanent host for the program.

The fact that a lot of the show’s staff could pull off the hosting gig is good and bad, because the main problem with them is that they don’t have the experience or the gravitas necessary to deliver the fake news properly. Still, having them co-anchor with Williams or split the time with him could give Comedy Central a better idea of who is the right person for the job since the network cannot simply let them develop into it over time. Having to replace two main programs in so little time has put the network on a very thin tightrope because they need to find a balance between giving a new person a chance, and keeping their ratings high in order to keep the shows alive.

A similar thing happened at NBC twice in the last decade; both times they pushed their Late Night host into The Tonight Show and found a replacement for Late Night because the host promoted had already proven himself and they were not worried they would lose ratings. However, during that time the new Late Night host could experiment and find his way of hosting the program. Comedy Central’s predicament is that their Late Night counterpart (The Colbert Report) just got replaced and is in the process of transitioning to the Nightly Show with Larry Wilmore, so they cannot afford to also lose The Daily Show audience and the show's rating as one of the highest rated programs for the timeslot. This leaves Comedy Central with big shoes to fill and no clear-cut option for replacing Jon Stewart.