Tales from Abroad: the beautiful Alhambra 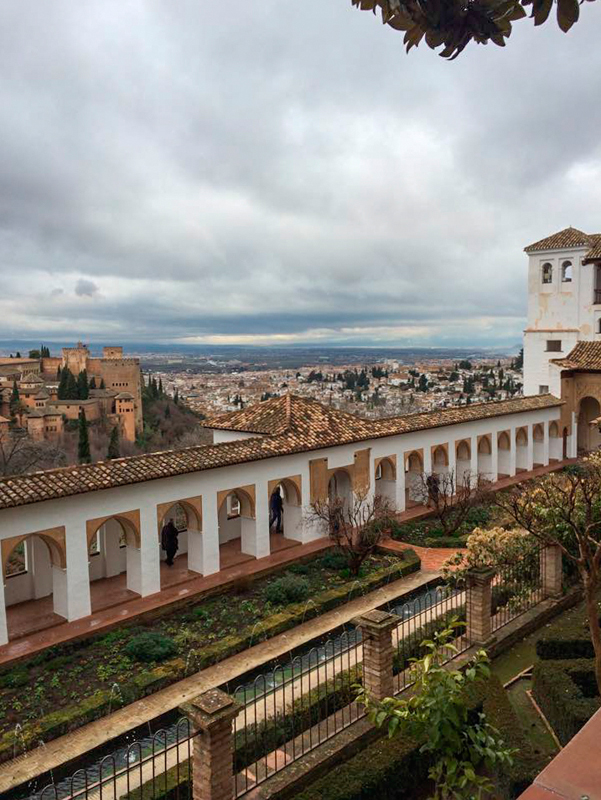 The view from La Alhambra was strategic for military operations. (credit: Senior Staffwriter)

I’ve always loved the physical signs of history. I love that the rushing tide of human life has carved its structures and swirls into the world. One of the reasons I chose to study abroad in Granada, Spain this semester was that Spain’s unique history of interaction between Muslim, Christian, and Jewish cultures permeates the city. A prominent example of this exchange is the Alhambra.

The Alhambra is a mix between palace and military fortress. Originally a military base, the Alhambra was built in the 9th century on Sabika Hill, right on the banks of the Darro River. The complex commands a strategically excellent view of the countryside and the city. In the 13th century, Mohammad I renovated the fortress, decorating it with religious and cultural artwork, and adding a water system that still works today. In 1492, the Catholic monarchs Ferdinand and Isabella conquered Granada. The Alhambra remained an important palace for Spanish royalty until it was abandoned during the 18th century.
All of this history adds up: the Alhambra is very old, very big, and completely beautiful. The outer walls of the complex are visible from all over the city, and are made of a reddish clay particular to this area of Spain. At night, when the Alhambra is illuminated, the walls shine a deep red-orange color. My two favorite aspects of the Alhambra are the Islamic decorations and the view from the walls. Arabic script figures prominently in the adornment of the buildings. Poems ring entire rooms, and variants on “Allah is the Lord” appear over and over again, carved into the white and cream marble that so many of the inner walls are made of. Carving words into the walls instead of painting them or hanging tapestries holds a certain beautiful simplicity. To me, the words look like decoration, but to someone who can read Arabic, they communicate a constant reaffirmation of faith. I love the idea that the assertion of belief is all the decoration that a palace needs.

The other part of visiting the Alhambra that I loved was the view from the walls. It seems clichéd — I liked the view — but rather I liked the way I could see a kind of history stretching out before me. American cities were designed with trade in mind; most major population centers revolve around rivers and potential ports, without the same clear need to protect and defend. While early American invaders had bloody conflicts with Native Americans, the threat of attack did not exist on the constant scale and level that many European cities experienced. From the walls, I could see that the fortress and the city were built with invasion and defense in mind. The Darro River and the mountains protect the city, and from the Alhambra, you can see for miles. From a military standpoint, visibility is key. Up on the walls, I felt like I could see the needs and the fears of the past so clearly.