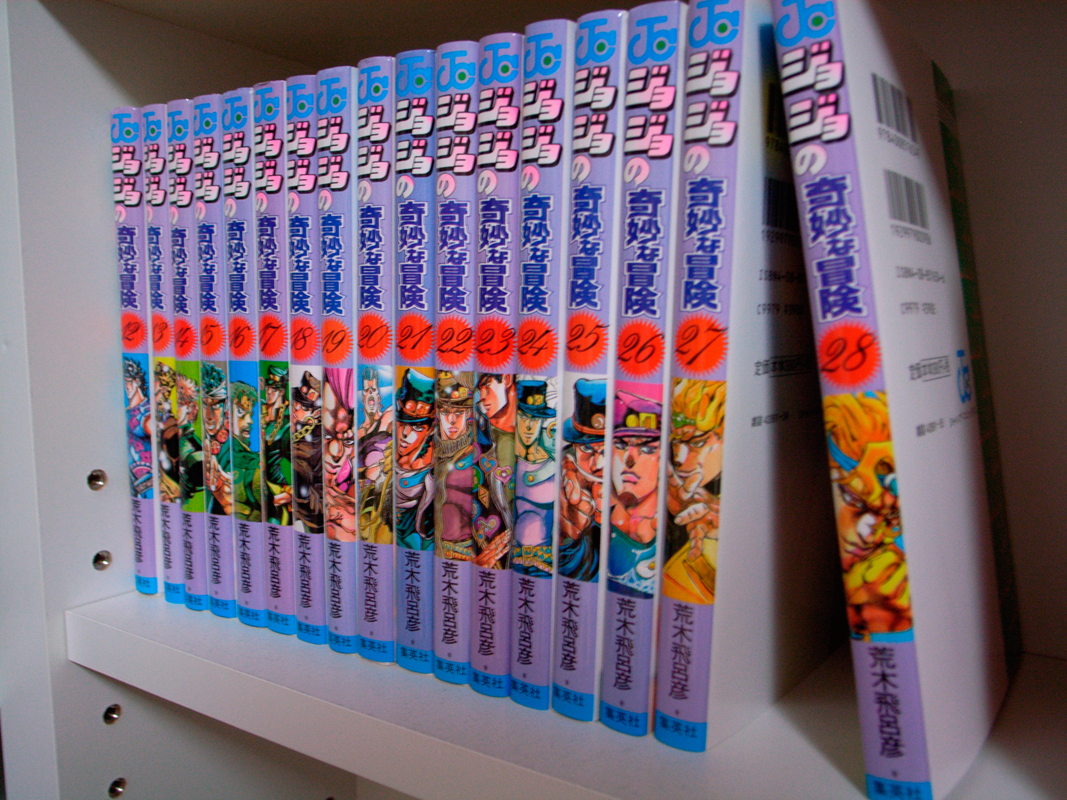 Carnegie Mellon’s a campus known for embracing quirkiness, but some of us still have appearances to maintain — not all of us want to be upfront about our appreciation of anime, and in my case it’s usually pretty easy. Generally, I’m not impressed by the bulk of Japanese broadcast animation; they tend to strike me as kind of trope-y and formulaic. Even if there are interesting designs or story flourishes, another show about the machinations of a student council or the passion-based fighting style of a cyborg is something I can’t put up with for too long.

So that’s why I’m so glad that something like Jojo’s Bizarre Adventure exists.

While there are older animated adaptations of the acclaimed manga by Hirohiko Araki, the latest run is jam-packed with visual charm and a great sense of style. Heavily stylized openings accompanied by delightfully hokey original compositions embrace the over-the-top attitude of the series show with arresting color palettes and some impressively detailed character animation that might just be CGI, but looks like nothing else.

It’s an indicator of what happens visually during the show as well. Every character in this show is built like a Greek statue, and there’s a goofy tendency for them to strike body-building poses when they deliver important lines. In scenes of heightened peril or emotion it’s not uncommon for the colors to shift shades enough that everything gets purple overtones or, in the case of the most recent episode, a villain is shown in shades of green as he stalks one of the heroes.

The series tells the story of a multi-generational struggle between the Joestar family and the immortal Dio. A deliciously evil and eminently quotable villain, Dio is transformed by an ancient stone mask from a malicious London street urchin out of an Austen novel into a bloodthirsty vampire. He partners up with the likes of Jack the Ripper and builds an army of the undead in a small British village.

The only one who can stop him is perfect gentleman Jonathan Joestar (called Jojo, as is the protagonist of every subsequent season). He’s taught an ancient martial art by an Italian baron named Zeppeli that allows him to “imbue his punches with sunlight.” Joined by Robert E. O. Speedwagon, he confronts the vampire and manages to seal him away.

Oh, did I mention that most every character in the show is named after an American musician or song from the ‘80s or ‘90s? Because there is literally a character named ACDC. He’s a bad guy from the second story arc. In this arc, Jonathan’s grandson, Joseph, is traveling the world to fight the ancient civilization of incredibly buff men who created the mask that transformed Dio. He teams up with a Nazi cyborg and a few other outrageous fighters to defeat this new threat, culminating in a fight inside an active volcano off the coast of Italy.

The current season is about Joseph and his stoic, tough-guy, half-Japanese grandson fighting their way across southern Asia alongside a serious Egyptian fortune teller, a manic French duelist, and another Japanese high schooler who likes to hang out poolside... in his school uniform. They’re trying to reach Cairo after Dio re-emerges, but this time, instead of using ancient martial arts, everybody gets a physical manifestation of their force of will called a “stand.”

The fighting in the later seasons becomes a little faster paced, and while there’s still has a lot of exposition about attacks and powers, things are kept fresh and visually interesting, and fights don’t usually last longer than an episode. It’s somewhat offset by a number of long narrations about some of the exotic locales visited by the group, explaining local customs or tourist attractions.

Jojo’s Bizarre Adventure is a completely ridiculous and utterly fun watch that either bucks the trends of a lot of anime or embraces them so wholeheartedly that they seem interesting again. If you’re looking for 75+ episodes of something to watch that looks good and is unabashedly silly in a way that’ll recapture some of the joy of your first exposure to “Japanimation,” look no further.