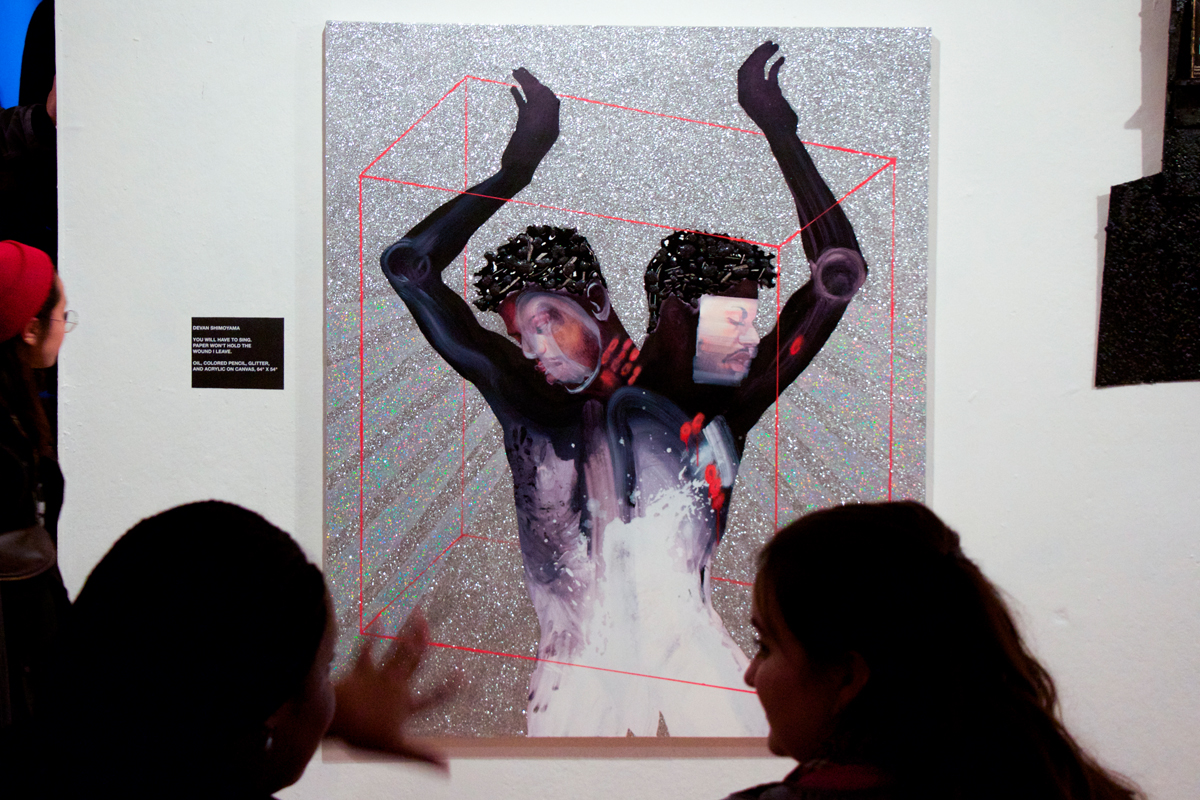 Pieces in the exhibition, such as “You will have to sing. Paper won’t hold the wound I leave” by art professor Devan Shimoyama, quickly spark dialogue. (credit: Staff Photographer)

Outside The Frame Gallery on Friday night, blue and red lights flashed like police sirens from a front window onto the corner of Margaret Morrison Street and Forbes Avenue, where people rushing to get out of the cold were illuminated momentarily. Black screens covered the windows of the gallery, preventing onlookers from seeing inside. The title of the show, Blackout, a dramatic concept, emphasizes the powerful and drastic nature of the artwork inside The Frame.

The exhibit, curated by sophomore art majors Maya Kaisth and Jarel Grant, is part of the annual celebration of Martin Luther King, Jr. Day. M. Shernell Smith, assistant director of Blackout, coordinator of campus MLK Day events, and housefellow for The Intersection, worked in collaboration with The Frame co-directors Jamie Earnest and Emily Miller to bring art addressing national social and racial discrimination to the gallery. “We have the MLK writing awards, which are wonderful, but I really felt as if there was a creative element missing,” Smith said of the MLK celebrations. In November, after approaching Earnest and Miller at The Frame, the three issued a call asking for individuals interested in curating a show dealing with the topics of racial and social injustices.

When approaching topics such as these it is important to remember the scope of the conversation. Carnegie Mellon’s celebration of Dr. King’s legacy has examined local, national, and international inequalities. As a globally recognized university, Carnegie Mellon has a unique role in shaping the dialogue surrounding issues of injustice and ignorance across national borders. However, Smith thought it was important to have a space for members of the campus community to respond to the recent events in Ferguson and New York as well as create art in response to the day-to-day experiences of living and growing up in this country. “We needed a space that allowed us to have a national conversation about injustices, period,” Smith said. And Blackout does just that. Every piece is provocative and illustrates the nuances in everybody’s experiences within America’s cultural and racial framework.

Maya Kaisth, one of the curators, decided to apply to take on the project when she attended a student-led protest at Schenley Plaza with Jarel Grant. Kaisth felt passionately that she “didn’t want to glaze over any of the hard topics brought to light by current events.” Both she and Jarel contributed to the exhibition. Kaisth’s piece uses the screens that prevent people on the street from seeing inside the gallery. On the sides of the sheets facing inward, Kaisth projected recent trending hashtags, such as “#icantbreathe,” as well as hashtags dealing with similar subject matter from a couple years ago, such as “#trayvonmartin.” Occasionally obscured by individuals passing in front of the projector, the flashing of these hashtags across the screen is an ever-present reminder of the gravity and relevance of these issues today. “I wanted to make a piece that was integral to Blackout and showed the importance of new media and social media in framing the movement,” Kaisth said.

When Kaisth and Grant sent out a call to artists, they received responses from non-majors, majors, and faculty alike. The media range from drawings to sculpture to video art.

Some of the art in the exhibition uses text to make a powerful statement. BHA junior Jacqueline Barnes’ piece “Betoken me,” is an illustrated narrative of her life accompanied by text. Each piece in the series shows how she has felt throughout her life, and talks about the power of her art to communicate her experiences. Phrases like “so I dreamed when I could not breathe, making a mold where none would fit me,” are incredibly powerful.

Junior art major Heather Cowie used her experiences on the popular app Tinder to create her piece “Me so lucky.” Cowie took the racial slurs and demeaning phrases that had been directed at her as an Asian woman by people on Tinder, and wrote them out on slips of paper like the kind found in fortune cookies. Fortune cookies and the “fortunes” stand on a small pedestal and gallery goers are encouraged to pick them up and read them.

Junior music performance major Nehemiah Russell’s piece “Civil War” included the text “with liberty and justice for all” in front of an illustration of a man’s face and shoulders divided down the center. The left side of the man’s face is a policeman, and the right side is an African-American man. The word “civil” falls on the side with the policeman, and the word “war” falls on the side opposite. The juxtaposition in color and identity of the two sides of the man is powerful and painfully truthful.

The rest of the pieces in the show are just as fascinating and important. “Wanting to be left alone,” a video art piece by sophomore art major Clair Chin, shows the artist white washing herself with derogatory words and phrases written on her skin. “Will Horton,” associate professor of art Andrew Johnson’s piece, is a drawing of Will Horton created from shoe polish used on top of sewn together flags that have been white washed. Walking through the exhibit brings so many questions and unique experiences to light. And that, after all, is the point of art — to make people think about their experiences and others’ and seek to learn more.

Smith hopes that exhibitions similar to Blackout can be done in future years in connection with MLK events. This year’s celebrations in honor of Dr. King have been emphasizing the importance of continuing a dialogue. Art is a way to get students out from behind their computer to go look at what experiences are like for those in their community. That is a different kind of engagement in a movement, one that relies less on acknowledging articles on Facebook in passing, and one that relies more on person-to-person interaction and understanding others’ lives and experiences. That is engagement, and Blackout certainly explores perspectives and experiences that are eye opening and essential to our understanding if we ever hope to achieve equality.

Blackout is on view at The Frame until Feb. 20.