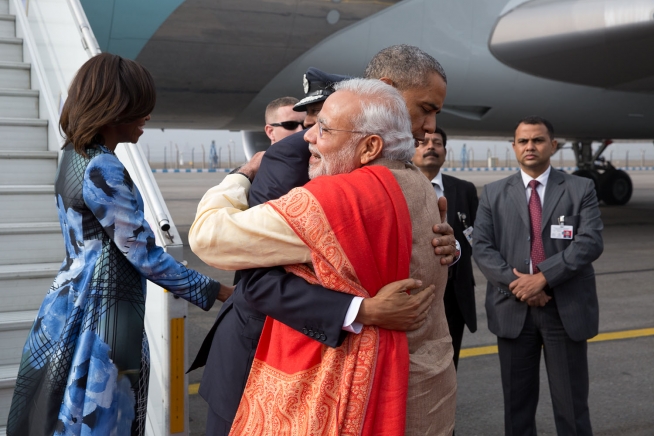 DEBATE: Are improving Indo-U.S. relations good news? (credit: Courtesy of Pete Souza via Wikimedia Commons)
Editorials featured in the Forum section are solely the opinions of their individual authors.

See the PRO side of this debate here.

I’ve been wary of Narendera Modi ever since he came into office as the prime minister of India, and Obama’s recent visit to India and the blossoming relationship between the two countries just confirmed my uneasiness.

Modi is part of the Bharatiya Janata Party, the Hindu nationalist party in India. Before running for prime minister, he was the chief minister of a state called Gujarat, which is equivalent to a governor of a state here. While in charge of Gujarat, he made great progress with infrastructure within the state, getting electricity and water to more people than ever before. But when riots broke out between religious Hindu nationalists and Muslims following the destruction of a Muslim tinderbox, Gujarat soon gained international recognition for another reason. After the burning of a train that was filled with Hindu pilgrims, the riots soon turned into an almost all-out massacre of thousands of Muslims.

Modi did not do anything to stop the violence while in power. He ordered officials to take no action against rioters, and was complicit in the dismissal of many police and court cases against Hindu rioters, according to The New York Times. On top of all of this, there are also allegations that Modi was actually actively perpetuating the violence against Muslims. The United States actually imposed travel restrictions on Modi during this time for his role in the riots. Even so, he was eventually re-elected as chief minister on a platform of uniting Hindus, largely around a fear of Muslims.

With the United States’ own shaky history with Islam and the Middle East, this closer relationship between the United States and India is incredibly worrisome. It might be great for both countries individually, but not for the international Muslim community as a whole or other countries, especially Pakistan and China.

India and Pakistan have had a long and violent history, starting and ending with the conflict over the border in the Kashmir region. U.S.–Pakistan relations have been shaky ever since 9/11, and have increasingly worsened after the death of Osama Bin Laden. On one hand, we found him in their country, which brings into question their commitment to eradicating terrorism in the region, but on the other hand we stepped all over Pakistan’s sovereignty as a nation by sending in a SEAL team and killing someone on their soil without even consulting them.

Pakistan’s foreign policy chief Sartaj Aziz warned of “India’s dangerous desire to create a space for war,” while Sherry Rahman, a former Pakistani information minister added, “Relations between India and Pakistan are in tatters,” according to The Wall Street Journal. Ever since Modi came to power, this has definitely been the norm. Peace talks have been called off and Pakistan’s attempts to revive dialogue have been rebuffed, all while Modi continues to accuse Islamabad of not taking enough action against terrorists. Meanwhile, there is growing aggravation that Obama has now visited India twice during his presidency but has not visited Pakistan even once. China, however, has been reaching out to Pakistan more and more.

While Modi and Obama were hugging in New Delhi, Pakistan’s army chief was on an official visit to Beijing. China is also regarding the U.S.–India relationship with vague suspicion, according to The New York Times. During Modi’s talks with Obama, the security quadrilateral he proposed included the United States, India, Japan, and Australia, which was worrying to China.

The South China Sea conflict, and China’s recent inflammatory moves in the region, were other topics of the talks. At Obama’s urging, Modi signed a statement criticizing China for how it handled the situation. There is also the threat that will result from the United States increasing sales of military technology to India. This development comes right after China lost its hold as India’s number one trade partner, a huge blow to China and worrisome for the nation on the security front.

Improving Indo–U.S. relations are great for both nations, and as an Indian-American, I’m happy to see the countries’ relations growing and forming in a new direction, but I’m still very wary of the public and overt way that this is happening, especially because both countries have had many issues regarding Islamaphobia in the very recent past, and both countries are now in the position to be extremely influential on the international stage. I just hope their influence is a good one.