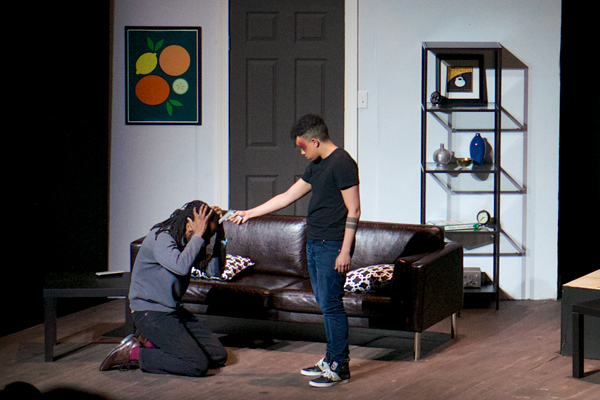 Carnegie Mellon’s Scotch’n’Soda recently put up their take on Stephen Adly Guirgis’s production The Motherfucker With The Hat. Loud and brash in parts, extraordinarily subtle in others, and chock full of gratuitous swearing throughout, the play works as a heady cocktail of guffaw-inducing one liners on one side and gut-wrenchingly painful moments on the other. As such, Motherfucker’s greatest strength lay in its ability to walk the fine line between hysterical humor and soul-scorching reflection.

Jackie, played by senior communication design major Sam Ahmed, is fresh out of jail and trying to stay clean. Having finally gotten a job, he wants to stay away from drugs and booze and do his part as a well-adjusted member of society. His girlfriend Veronica, on the other hand, played by junior civil and environmental engineering and engineering and public policy double major Erin Persson, loves her booze, cigarettes, and cocaine. In the hilarious opening scene, Veronica smokes a cigarette and snorts a line while telling her mother to look after herself and dump her current boyfriend. Jackie, ever the doting boyfriend, walks in, full of excitement because he found a job. The premise of the play is set when Jackie discovers a man’s hat in the living room that doesn’t belong to him. From that point on, everything goes south for him and Veronica.

Looking for advice, Jackie turns to his Alcoholics Anonymous sponsor Ralph, played by senior professional writing and global studies double major Razghiem Golden. Ralph, himself an ex-addict, now a health beverage obsessive, tells Jackie to dump Veronica because of her philandering and constant drug habits. In the meantime, Ralph isn’t doing too well with his own wife Victoria either, played by senior psychology major Nkem Chikwendu. From this point on, Motherfucker follows the explosions and repercussions that spill over from this simmering brew of raging emotions.

The casting is spot on. Sam Ahmed, as Jackie, is innocently oblivious to the machinations of those around him. He wears Jackie’s struggles on his sleeve, from his problems with Veronica to his problems with substances. Easy to manipulate and constantly at war with himself, he elicits sympathy from the audience in spite of his questionable judgement.

Erin Persson as Veronica is equally likable. Effectively playing the part of a woman dealing with the consequences of mistakes she made when her boyfriend was away in prison for two years, she lurches from crisis to crisis. Constantly tortured, she lashes out at everyone who stands in her way. At the end of the day, one feels bad for her being trapped in a horrible situation she clearly can’t escape.

Razghiem Golden as Ralph is a smooth talker that seems to be a model of comically good behavior. It takes a while for one to realize that there is more to him than meets the eye. In a hilariously horrifying scene, Jackie confronts Ralph after a betrayal, only to have Ralph turn the tables on him for not having gotten his life together.

We also have Jackie’s cousin Julio, played by senior vocal performance major Taylor Rawley. Julio is played as a sensitive, effeminate individual who repeatedly helps Jackie even though he overtly despises him. Whether he is discussing hair care and waxing or emulating Jean Claude Van Damme, Julio makes for a good comic foil to the comparatively somber Ralph.

The standout character, however, is Chikwendu as Ralph’s wife Victoria. Subtle and understated, she slowly evolves from the stereotypical disgruntled wife into the most layered character of the lot. In what is arguably the best scene in Motherfucker, after smoking some weed with Jackie, Victoria tries to convince him to sleep with her out of pity. When he refuses, she tells him information that goes on to dominate the proceedings from that point onwards.

In spite of the depressing subject matter, watching Motherfucker was a riot. The actors all have impeccable comic timing. Brutal scenes are made all the more horrifying by how funny they are. The play deals with several themes, including unrequited lust and its consequences. Several characters have very different motivations for coupling with several others; this sets an interesting canvas for the confrontations that inevitably occur.

More than anything else though, Motherfucker shines for being stuffed with irrational, overwrought and pulpy emotion. Characters act on impulse. They rarely, if ever, make rationally sound decisions. But whether lust or love or addiction or pain or betrayal, the characters feel so strongly as to captivate the audience into empathetic submission.