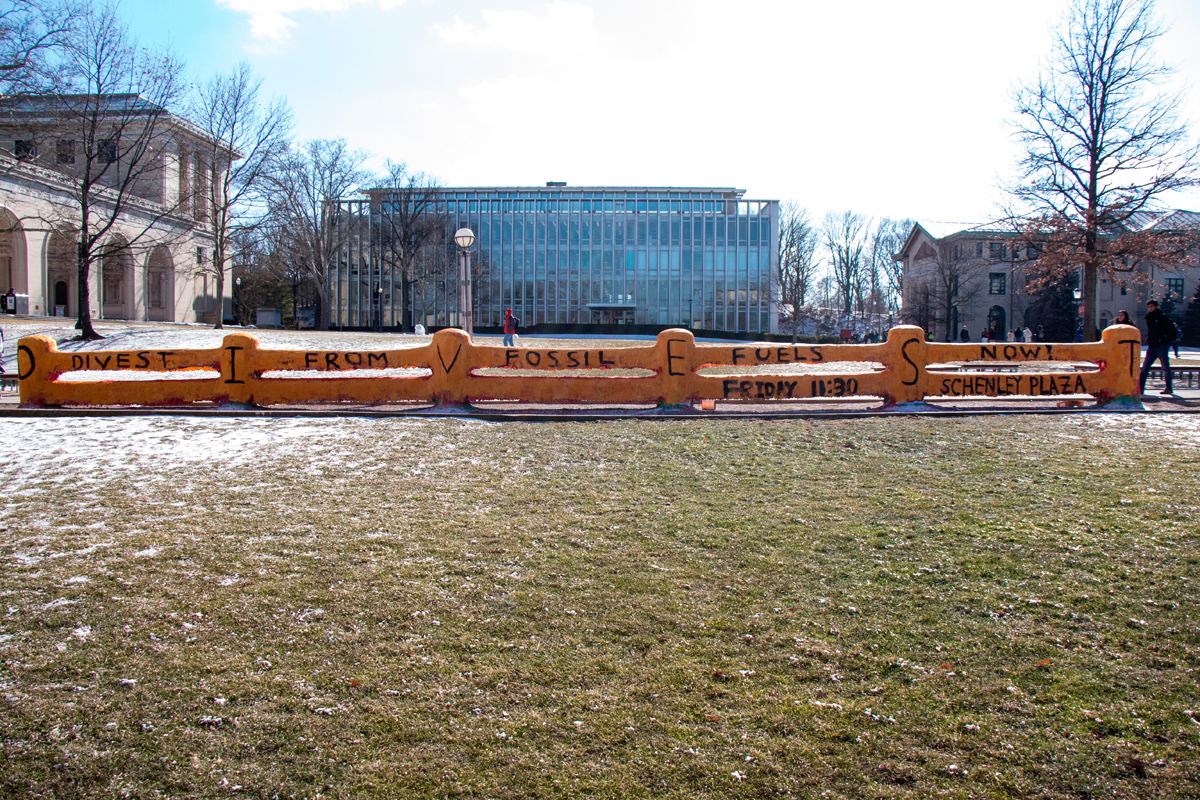 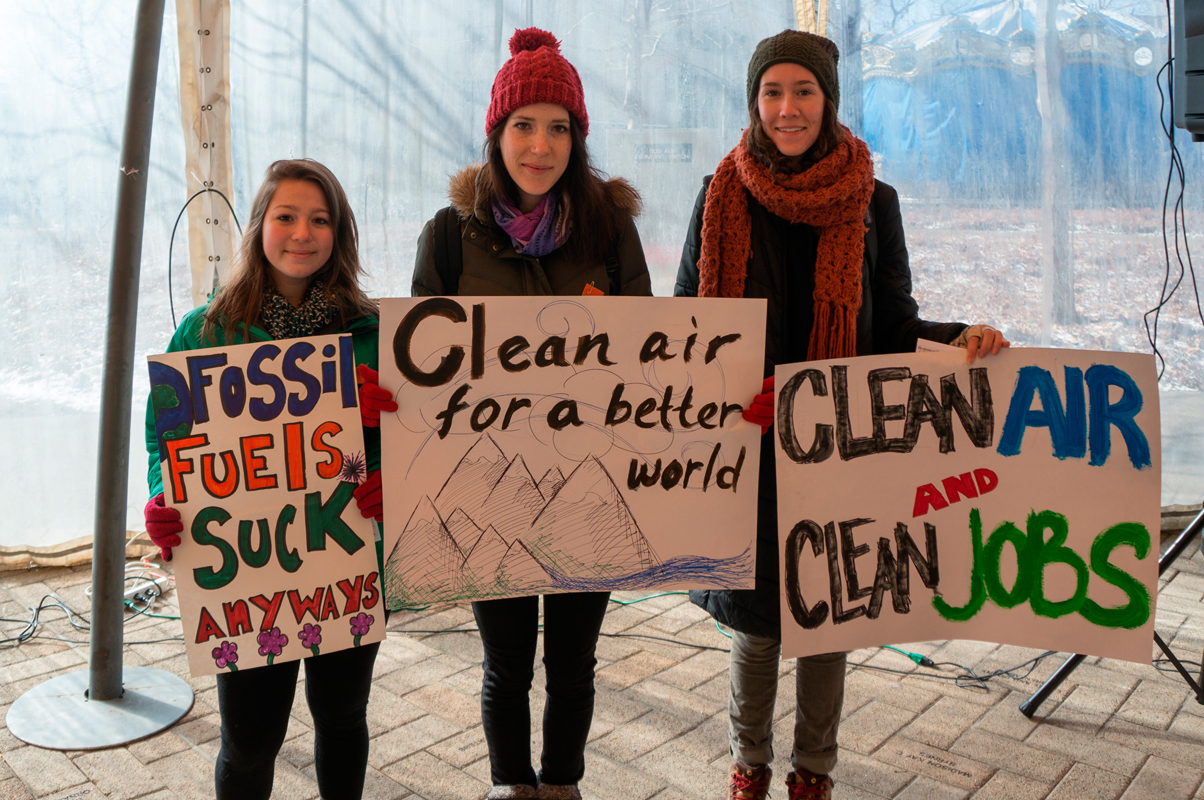 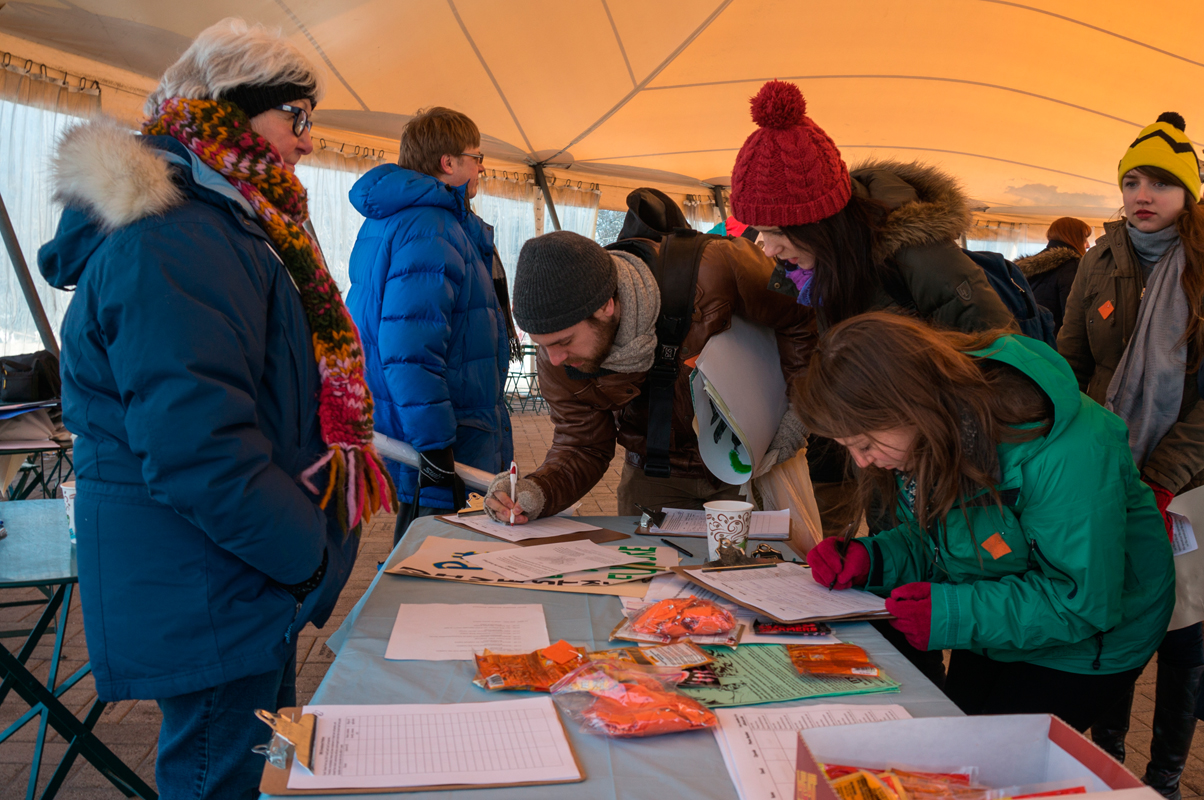 Students and activists from around Pittsburgh gathered in the tent at Schenley Plaza in sub-freezing weather on Friday as part of a rally urging Carnegie Mellon, the University of Pittsburgh, and the city of Pittsburgh to divest from fossil fuels. Carnegie Mellon was represented by members of Sustainable Earth, a student organization dedicated to promoting green practices at the university and in the surrounding Pittsburgh community.

“We are taught again and again in our classroom[s] that our future is to promote innovation that will change society,” she said to the gathered crowd as volunteers handed out hand warmers and hot chocolate. “But by aligning itself with fossil fuel companies, CMU is aligning itself against innovation.”

In an interview, Epstein said that Carnegie Mellon’s student divestment movement is still in its early phases, and is hoping that Friday’s rally will kick-start its campaign.

“We’re trying to get student support first, so we’ll have a lot of signatures and [the administration] will know what we’re asking, and then we’ll start a dialogue,” Epstein said. “It’d be really nice if we could go in and be like ‘This isn’t just a crazy group of kids, it’s really what your student body is asking for.’ ”

Although the petition currently only has around 50 signatures, Epstein hopes that by participating in Friday’s rally and painting at The Fence, Sustainable Earth’s divestment movement can build momentum. The petition asks Carnegie Mellon to divest from the top 200 companies in support of fossil fuel, which include Pittsburgh-based corporations like the Aluminum Company of America, Inc. (ALCOA) and Consol Energy, Inc.

Stanford University, as well as many smaller universities — including College of the Atlantic in Maine and Hampshire College in Massachusetts — Epstein said, have already divested from fossil fuels. “Everyone is trying [to divest]; right now is kind of the center of the movement. Most colleges have a big movement to try to get this done.”

When Sustainable Earth started their petition in November, Carnegie Mellon’s Chief Investment Officer Charles Kennedy told The Tartan that the university’s investments are managed by third-party experts who focus on growing the endowment: “Assets are allocated to investment funds managed by third-party experts who specialize in particular strategies. We believe this approach — with its broad, global diversification — will enable the endowment to continue to strengthen over time, providing greater ongoing support for the university’s operating needs, while preserving purchasing power to support future generations of students, faculty, and programs,” Kennedy said at the time. Kennedy could not be reached for comment.

Among the other speakers at the rally was Gabriel McMorland, new economy campaign organizer for the Thomas Merton Center, an organization dedicated to social justice in Pittsburgh that is petitioning the city of Pittsburgh to divest from fossil fuels.

“This is not the time to be investing in those fossil fuel companies and to be investing in the fossil fuel industry,” McMorland said. “They still think they’re a good investment, but the only reason they’re continuing with their business plan is because they believe we can’t muster up the political power to enforce real regulations that protect people and the environment.”

Matthew Powell-Palm, a senior mechanical engineering major and member of Sustainable Earth, said that the divestment movement at Carnegie Mellon, once it has heavy student backing, will work with the university’s Green Practices Committee and approach the administration.

“The nice thing about divestment is that it can happen on a ton of different levels that are equally impactful,” Powell-Palm said. “So maybe it starts with, say, the MechE department divesting. While a large part of it is real and economic — and you are leveraging actual power when you move money — a large part of it is also symbolic, saying that by removing our money we’re removing our nominal support of the fossil fuel industry and development of the fossil fuel industry.”