Precise data could help with treatment of chronic illness 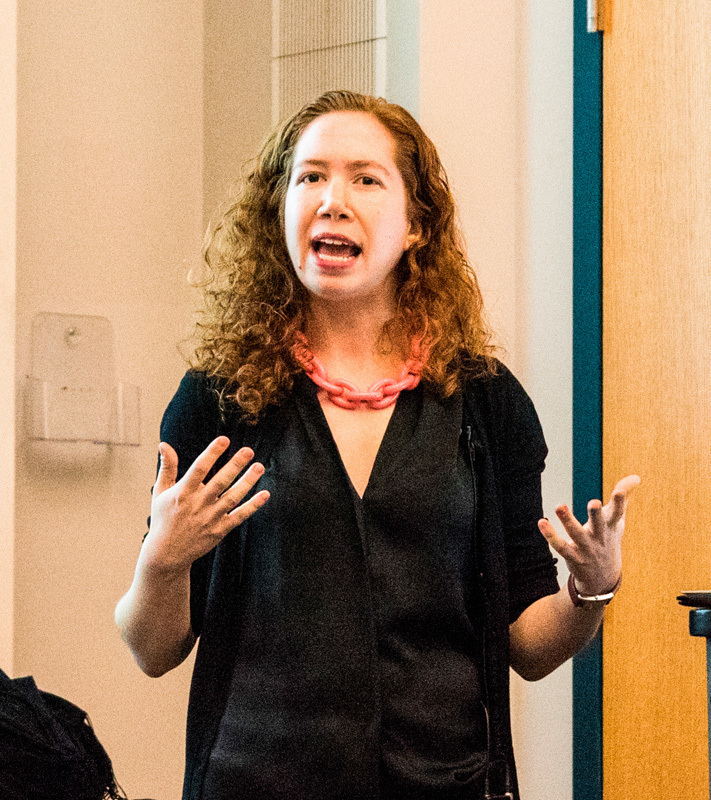 Samantha Kleinberg, an associate professor of computer science at the Stevens Institute of Technology, gave a lecture about the need for precise data. (credit: Josh Brown/)

The Human-Computer Interaction Institute hosted a talk last Friday, Nov. 20, by Samantha Kleinberg, an associate professor of computer science at the Stevens Institute of Technology, which focused on her current research efforts in medical data collection.

Kleinberg’s research focuses on “observation, not experimentation,” due to the ethical and feasibility concerns inherent in testing diseases and medicine. In her talk, Kleinberg noted that massive amounts of data within public health records, ICU data streams, and other data sets, are not as strong as they could be, which affects the viability of observational research.

Kleinberg explained that there is a lot of error in experimental data, which comes from a multitude of causes.

For example, data is often omitted from records for various reasons, such as instrument malfunction or human error. Individual diagnoses are also flawed measurements, in a predictive sense, because they are only measurements of when the disease was recognized by a doctor, not a timeline of the actual damage, say, to the heart due to heart disease. Other measurements, such as insurance tags for diseases, are also inaccurate, because the codes are often approximated, featuring only what the insurance company covers, which may or may not be what the patient has.

Kleinberg noted that studying methods of data collection could improve the way researchers use data to determine the cause of diseases.

“I don’t want to know that smoking causes cancer,” Kleinberg said. “I want to know the timeframe; what effect does smoking for ten years versus five have? What dosage of cigarettes?”

This very specific way of thinking about data is what guides Kleinberg and her research. Her studies revolve around chronic diseases such as diabetes, where most of the treatment is self-administered, which is why the specificity of data accumulation is so important. Data for these types of diseases is largely only recorded episodically when a patient visits a hospital, but Kleinberg and her team were interested in monitoring patients in a more universal manner, in an effort to optimize self-care processes.

To do this, Kleinberg and her team focused their efforts on one specific scenario and looked at how to collect data about eating. They specifically studied ways to record eating beyond self-report, which introduces a lot of human error. To do this, the team investigated the use of multiple body-worn sensors to track chewing, moving food to the mouth with the hands, swallowing, and many other actions. The set-up was very detailed, consisting of movement sensors on the wrists, the head, a microphone earbud within the aural canal, a scale under the plate of food, alongside video cameras. In this way, they hoped to gain a more universal and less error-prone view of this process.

Kleinberg spoke about the sheer amount of time it took to track all of the data, which involved tasks such as tracking chews and annotating the video alongside sound data. While tedious, the collection of this specific, precise data provides a much more detailed depiction of a situation that, Kleinberg argues, has the potential to be beneficial. While this process may seem trivial to the untrained eye, future researchers might be able to use this highly accurate information in productive ways.

“The ultimate goal is an artificial pancreas,” Kleinberg said. Kleinberg explained that a patient with an artificial pancreas today needs to do a lot of work to support the device. Highly specific, accurate data could allow researchers to modify current artificial options to eliminate this work on the patient’s side and introduce a sort of automatic treatment.

The prospects of Kleinberg’s project, including triumph in the treatment of chronic illness, are great. Her ideas about data collection offer a novel perspective of how research should be conducted, and how data should be analyzed.

These suggestions, when put into practice, could reinvent the data collection process and lead to various discoveries, including improved treatment options for those with chronic illness. Until then, however, it’s just a matter of tracking the chews.