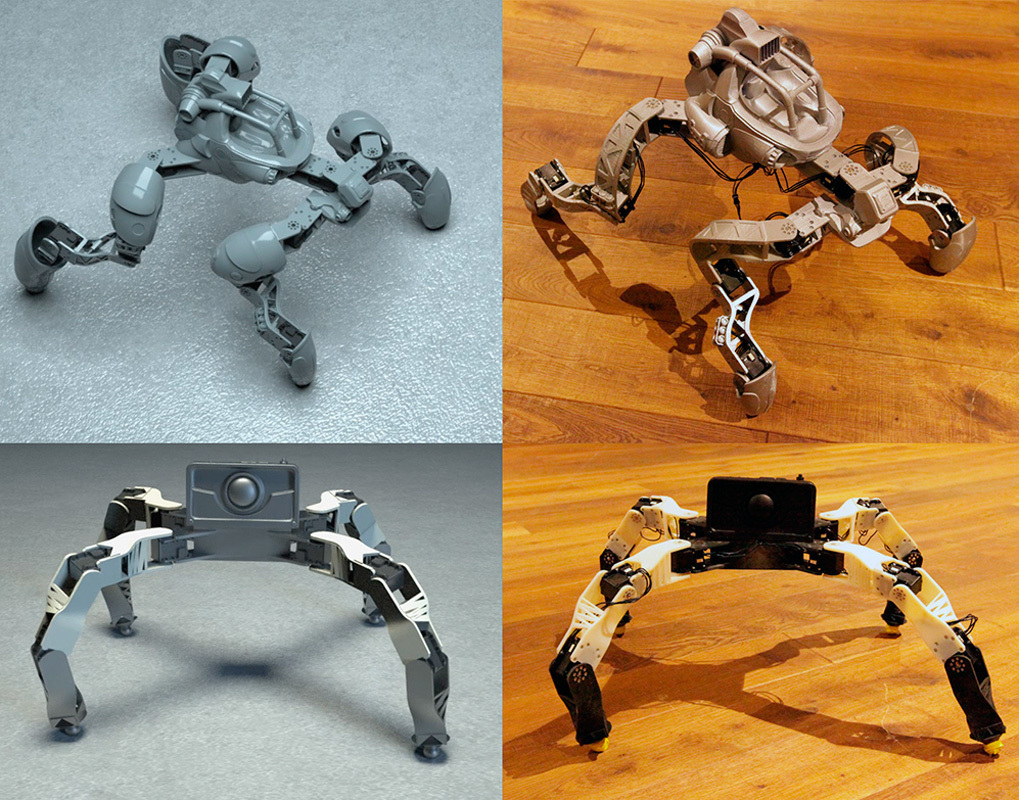 Recently, Disney Research and Carnegie Mellon University teamed up to create an interactive system that 3-D prints customized walking robots. With these new design tools, a user can pick the shape, size, and number of legs of the robot, and the system will ensure that the robot is capable of moving as desired, able to walk forward, sideways, and turn.

“Progress in rapid manufacturing technology is making it easier and easier to build customized robots, but designing a functioning robot remains a difficult challenge that requires an experienced engineer,” said Markus Gross, vice president of research for Disney Research and director of the Disney Research Zürich lab. “Our new design system can bridge this gap and should be of great interest to technology enthusiasts and the maker community at large.”

“We aim to reinvent the way in which personal robotic devices are designed, fabricated, and customized according to the individual needs and preferences of their users,” said Stelian Coros, an assistant professor of robotics at Carnegie Mellon who is a former Disney research scientist.

Bernhard Thomaszewski, a research scientist at Disney Research Zürich, also commented on the goals of the research, saying, “Our ambition is to make the design of compelling robotic creatures as accessible and intuitive as possible. Our tool allows the user to design the structure and motion of a robot while receiving immediate feedback on its expected real-world behavior.”

To use the system, a user uploads a skeletal sketch of the desired robot, and the system creates an initial geometric layout for the robot, complete with motors at each joint location. The design tools feature two viewports: one that allows the user to edit the robot’s structure and motion by adding or removing motors and adjusting their orientation, and another that allows the user to see how those edits actually change the robot’s behavior. The user can also edit the overall motion style of the robot by editing the trajectories for the robot’s legs directly along with the time-dependent position and orientation of the robot’s body, giving each robot a sense of personality and style.

As a part of their system, the researchers have developed an optimization method that relies on an approximate dynamics model to create stable walking motions and patterns for robots with multiple legs in just a few seconds by preserving locomotion stability. After the user completes the design process, the system automatically generates the 3-D geometry of all the parts of the robot, which can then be sent to a 3-D printer.

To test their system, the researchers designed and 3-D printed two four-legged robots, and they found that the robots’ movements were consistent with the predicted model and design.

“It took us minutes to design these creatures, but hours to assemble them and days to produce parts on 3-D printers,” Thomaszewski said. “The fact is that it is both expensive and time-consuming to build a prototype — which underscores the importance of a design system such as ours, which produces a final design without the need for building multiple physical iterations.”

In addition to Gross, Thomaszewski, and Coros, the research team included Vittorio Megaro and Otmar Hilliges of ETH Zürich and Maurizio Nitti of the Disney Research Zürich lab. The research team presented the system at SIGGRAPH Asia 2015, the ACM Conference on Computer Graphics and Interactive Techniques, in Kobe, Japan.