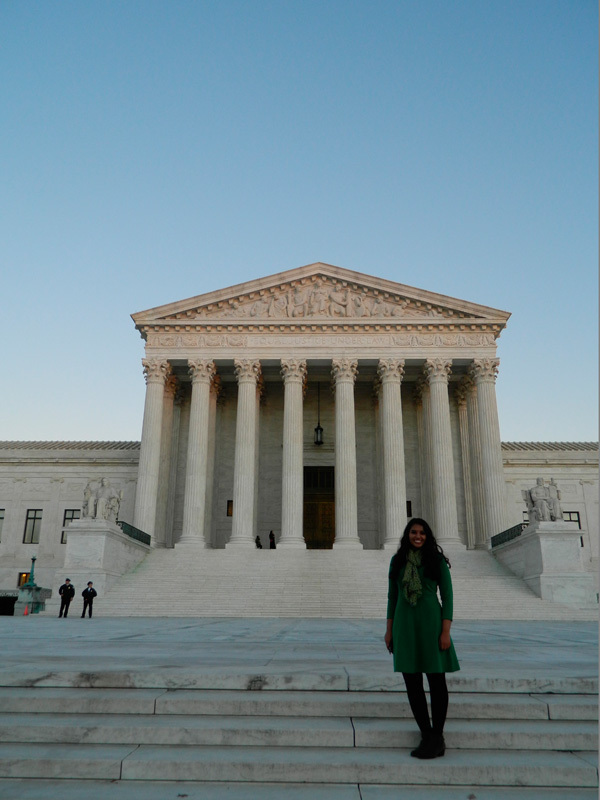 Ganpule stands in front of the United States Supreme Court during her semester in our nation’s political center. (credit: Courtesy of Ashwini Ganpule)

I was an unlikely candidate for the Washington Semester Program, but a set of perfect circumstances and timing allowed me to head for the nation’s capital at the beginning of this semester. I set off from home with starry-eyed visions of the Capitol, the White House, the various monuments, and the history that would surround me. In my mind’s eye, I could see myself purposefully walking around an imposing office building, looking important, just like I had seen in all of the political dramas I had binge-watched over the summer. The realities of Washington did not meet my expectations (I still haven’t seen Olivia Pope or Frank Underwood), but in some respects, they have exceeded them.

I expected that looking nice every day would be fun and easy. In my pre-Washington daydreams, I saw myself as the serious and put-together young professional by day and the smartly dressed tourist by night (and weekend). In reality, I found that dressing up and looking nice every day is hard work. It takes serious commitment to wake up every morning and actually take the time to look nice before leaving the house. Not only is looking tasteful and professional a requirement of the job, but also of the city. Washington is what I like to call a “catalog city.” Walking down the street on any given day, I feel like I am inside a high-end magazine photo shoot. Every person who passes by looks like a model. They all look like they know exactly what is going on, and they are all rushing around, too important to smile at any passing stranger. Although not the friendliest city during rush hour, it’s thrilling to look around and realize that most everyone around you is trying to influence policy and law.

Before arriving, I also expected that my internship would be fast-paced, with a starchy supervisor focused on getting things moved through the bureaucratic chain. The reality is that government is slow, despite the hard work and long hours of federal employees. Everything that is written or produced on behalf of my office’s independent advisory committee must be double, triple, and quadruple checked by other interns, our supervisor, and key committee members before it even goes to the subcommittee. The amount of scrutiny these products go through does help ensure that all interests are represented in the most effective way and that the information put forth accurately portrays those interests, but the time and amount of research done to do the work can be daunting and slow. While my office is not fast-paced, my expectations were far exceeded by the reality of my overall work environment. I work in the imposing, old-style building that I had envisioned. (It is so nice, in fact, that Donald Trump bought the building directly across the street.) Also, people at work are very friendly and welcoming. I have found that most people are very willing to talk, offer insight, and help.

My initial excitement about D.C. was because of the expectation that I would get to be a tourist for almost four whole months. The reality has been much better than that. Not only have I gotten to be an almost-local tourist, I have also been able to do things that I never imagined. I have attended talks and question and answer sessions with Supreme Court Justices, been to a Congressional hearing, heard the Head of Communications for UN High Commissioner for Refugees speak about the Syrian Refugee Crisis, and more. I never would have dreamed of having these opportunities before coming here. There is always so much that can be experienced here at any given moment. It can be overwhelming at times, but it has been incredible to absorb all of these events.

The one place where my expectation met reality is in networking. In the few months that I have spent here, I have probably heard the word “networking” more often than I had in all my previous years. Washington is essentially built on it. At most events and after work, networking is expected. It can feel very artificial at times, but it has exposed me to new ideas and possibilities that I would not have otherwise known of.

While my expectations and the realities of what D.C. had to offer did not meet in the middle, it has still been an incredible experience getting to know the city for what it is. I have enjoyed being a tourist and learning entirely new things. While the Washington Semester Program has not been without its challenges, I am glad that I have had this opportunity to be here.