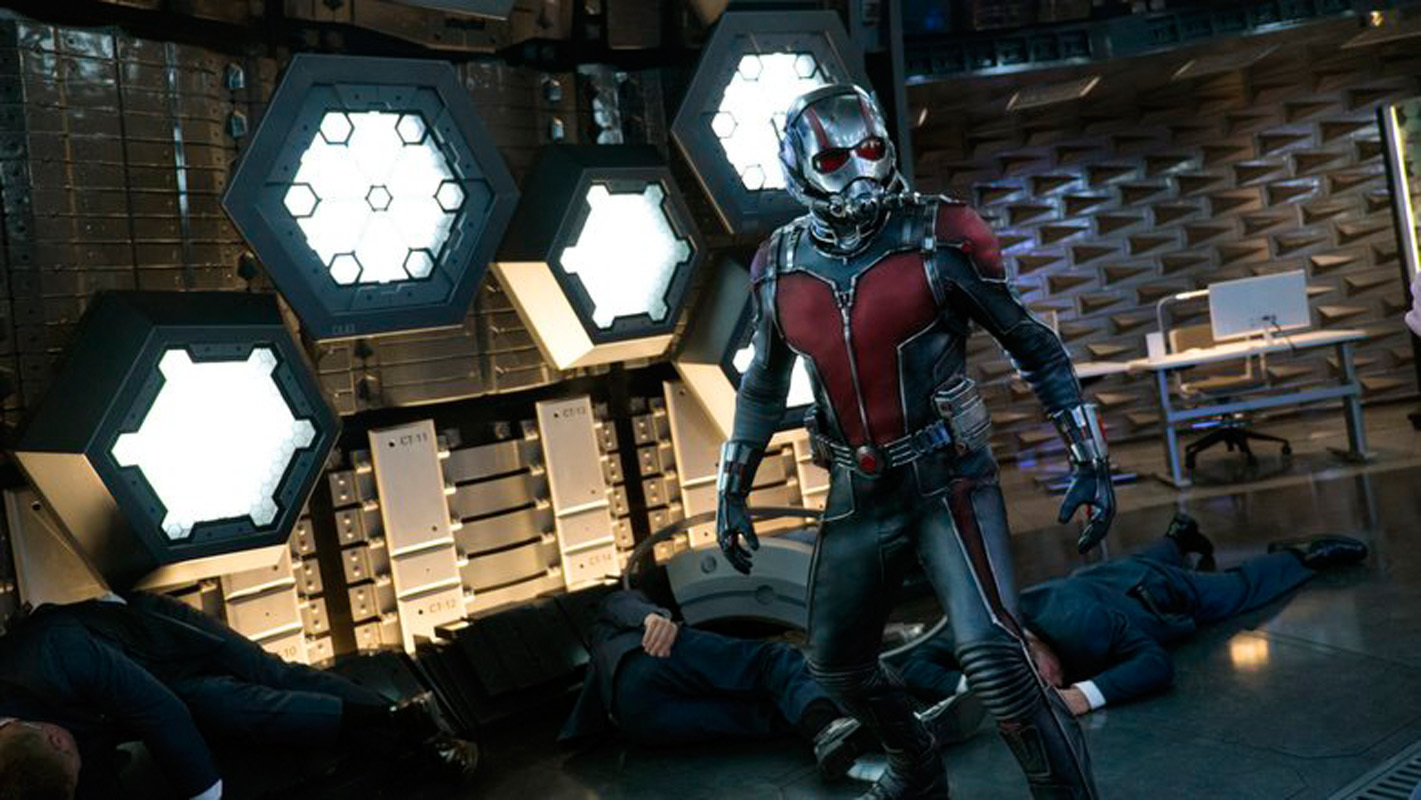 *Ant-Man*, one of this year’s new superhero films starring Paul Rudd, may turn into a series of films with talks about a sequel. (credit: Courtesy of daland dere via Flickr Creative Commons)

The DC Cinematic Universe is just getting started. We’ve seen Man of Steel, which was a great start to opening up the universe, but we’re still in the early stages. We’re still unsure about what this world is going to look like. We’ve seen the Nolan Batman trilogy, and a few trailers, but it is a real flip of the coin as to whether or not audiences will flock to these films the same way they do for Marvel films. The major trailer for Batman v. Superman: Dawn of Justice has been heralded as one of the best trailers in years, and the film looks like it will be spectacular. DC and Warner Bros. have also released the first trailer for director David Ayer’s (Fury, End of Watch) Suicide Squad. The trailer doesn’t stack up to BvS, but the tone and intertwining story match up brilliantly. Producer Charles Roven sat down with entertainment news website Collider to discuss Suicide Squad and revealed that the film would push the PG-13 rating to the edge

“We really want to make these films tonally consistent so that, as I said because this is a shared universe, at least our current thinking — and again, we’re not dealing in absolutes because while this is business it’s also a creative endeavor, so you want to leave yourself open to changing your mind, doing something different, being inspired. That’s the whole process of filmmaking is, you have to allow for inspiration as well as having a road map for what you’re gonna do. So our plan right now is to make all these films PG-13. In some cases, you know, right there on the edge of PG-13, but still PG-13.”

Roven also spoke about Jared Leto’s Joker and how his methods only enhanced the positive attitudes on set. “Look, you know, it was different, it was fun. The group first wasn’t sure because the AD’s had to call him ‘Mr. J’ to get him to come to the set. And he did in many ways isolate himself from the rest of the group, but that’s really what his character was, the purpose of his character in many ways, other than when he was with Harley or trying to get Harley. It was very entertaining, it was fuel for a lot of good sport and a lot of laughs, and his isolation bonded the squad, and we wanted the squad bonded.”

Ant-Man was not on audiences’ radar screen during the summer blockbuster season. Die hard comic fans know the character and were the first in line to see the film starring Paul Rudd, Evangeline Lilly, and Michael Douglas as Dr. Hank Pym. Since the critical and widespread success of the film, Marvel has announced Ant-Man and the Wasp for a July 6, 2018 release. Douglas spoke to Collider expressing his anticipation to return to the character:

“I just got a call recently — they want to negotiate for a sequel and I thought, ‘That’s great!’ Hopefully, I won’t have to carry quite as much expositional dialogue as the first one, but I had a wonderful time doing it. Just a great, great time. The cast was fantastic. Paul, Evangeline, Michael Peña — I’m sure he’ll be back. If they can scrape Corey Stoll off the wall, I’m sure they’ll want him too — he’s such a good villain. And [director] Peyton (Reed) too. It was a lovely experience, so you know, I welcome it. I chuckle about being involved with a movie that already has a release date in 2018. Ya know, it’s hard to conceive of that, but it’s all good, all the way around, it’s all good.”

Michael Douglas was one of multiple high points of the film, and having him back for the sequel is essential. Dr. Hank Pym created the Ant-Man suit and worked with Howard Stark at the birth of S.H.I.E.L.D. Retaining the world-class talent of Douglas means securing a strong secondary cast to The Avengers and strengthening the backdrop of the story.

Universal Studios, in the “Golden Age of Hollywood,” was built on the backs of its monsters. Frankenstein, The Mummy, The Creature From the Black Lagoon, and Dracula exist under the same umbrella but have never shared a screen. With studios racking their brains to create shared cinematic universes, like Marvel or DC Comics, Universal has taken a page from the book and, one could say, developed a “monster mash.” They have brought Alex Kurtzman (Transformers) and Chris Morgan (Furious 7) to lead a team of writers and producers to mix the creatures together and modernize the classic films while maintaining the original charm that built the studio giant.

In an interview with Variety, the creative team explained the plan. “This is not a heightened world,” Morgan said. “We’re exploring issues of family identity and questions of, ‘Where do I belong in the world?’”

Donna Langley, chair of Universal Pictures said, “the characters will interact with each other across movies. We’re incubating it at the moment, and we’re taking the time to get it right.”

“We’re creating a mythology, so we’re looking at this canon and thinking, ‘What are the rules?’ ” Kurtzman said. “What can we break and what are the ones that are untouchable?”

The plan is to release a new monster movie every year. The first, based on The Mummy, will begin shooting in early 2016, with productions centered on Dracula, Van Helsing, Bride of Frankenstein and the Wolfman following. Kurtzman and Morgan were heavily inspired by early Universal monster flicks starring Boris Karloff and Bela Lugosi, so involving talent that has a nostalgic reaction to the characters they are creating is all good for Universal.