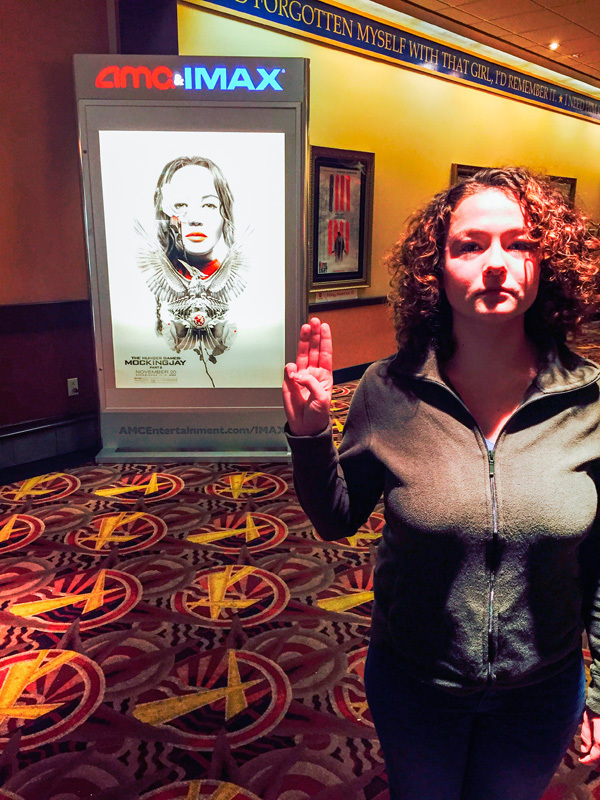 I settled into my seat — top left, with no one in front of me so I could put my feet up — at the 11:00 a.m. IMAX showing of Mockingjay Part 2. I had my chicken tenders combo meal with curly fries and a large Coke to soothe me. The honey mustard wasn’t very good, but the curly fries were perfection. The theater was mostly filled with old people. I was in a good place.

Minor spoilers ahead; proceed with caution.

Then the movie started. Katniss is in the hospital, as she is for like one third of the Mockingjay movies. The other thirds are her begging to go to war and Coin making her star in propaganda films. Her neck is bruised, reminding us that Peeta tried to strangle her. She can barely talk because of some swelling in her vocal chords. Then they tell her that they’re sending Prim in to see how Peeta reacts to a familiar face. Katniss watches through a one way mirror. At first he’s alright, but as expected, he soon loses it, shouting that Katniss is a manipulative liar and other angry things. He’s so angry that he’s actually drooling. Pan to Katniss’ face looking blank, then the mockingjay symbol appears and we have an opening sequence.

As far as opening scenes go, this one was kind of stark. It was limited in that it had to pick up where the last movie left off, the nature of the two-part finale. It sets up the Peeta-wants-to-kill-Katniss-but-still-loves-her plotline. Thanks, Capitol. But there’s so much more to the movie than their relationship. For the finale of this epic saga of war and love I wanted an introduction with more kapow.

Then finally we get the action I knew we were all craving. Katniss and a bunch of other people fly to District 2, the Capitol’s military stronghold. There’s some place called the Nut, surrounded by mountains, where all the weapons are stored, but it’s teeming with Peacekeepers and loyalists. Rather than try to take it out, Gale devises a plan to set off a bunch of avalanches to block all exits and trap them in. Katniss is outraged of course, so they leave the train tunnel for civilians to surrender. We can see Gale becoming a genius yet ruthless strategist in this scene. Hint: foreshadowing.

When the attack happened, they used the meeting with the surrender train as an excuse to film a “propo” — one of the capitol’s propaganda films. Katniss is supposed to make a speech and inspire everyone because she’s basically a political tool of the resistance. And of course, some guy in the crowd has a gun but looks like he needs help, so she rushed to his side to help him but ends up with a gun at her face. He says “Give me one reason not to shoot you.” This leads into her pretty iconic speech where she just responds with “I can’t.” She jumps into an explanation of why this battle between them is all because of Snow. So she ends it with, “Turn your weapons to the Capitol! Turn your weapons to Snow!” And then she gets shot on film.

So she’s back in the hospital, again. And she’s begging to go to the front lines to fight, again. Instead, she gets to go to Finnick and Annie’s wedding so they can film everyone eating and dancing and having a good time, a show of strength. Of course, as much as Katniss loves these two newlyweds, she’s not much for fanfare. She and Johanna Mason, angry goddess, chat along the wall. Johanna tips Katniss off that there’s a shipment of medical supplies heading to the front lines that night, so of course she escapes.

For those viewers who read the books, this part was a little meh. This was supposed to be where the two train together, become roomies and besties, and then take an exam so they will be allowed to go to war. Katniss passes by suppressing her urge to disobey commands and Johanna fails because she’s afraid of water.

But anyway, now Katniss has just finagled her way to the frontline and thinks she’s so sneaky. Except of course Coin finds out and turns it into an opportunity. She assigns all kinds of super skilled soldiers to her group and then makes them shoot propos miles back from the frontline, on the “battle-scarred streets.” I know this also happened in the book, but it still baffles me that they would rather have all their best fighters not actually fight. And oh yeah, they also bring Peeta along for no reason, but he and Katniss start playing this game where he asks what’s real and not real. It’s kind of cute.

Also, there’s this one scene where Katniss is “sleeping” but she hears every word of Gale and Peeta talking about who will get to win her once this is all over. It was strangely reminiscent of the scene in Twilight: Eclipse where Jacob is keeping Bella warm in the tent before the battle. Like come on, let a girl live. Vary up your romantic sagas.

From this point on, all they do is run into pods, or evil motion triggered weapons that Snow has planted at every other step. And for a solid hour straight I’m so anxious I can’t get my shoulders lower than my ears. Peeta tries to kill Katniss, they lose four people, then they go underground, they lose like four more people. Snow sent in some highly disturbing mutts that were described in the book as lizard people, but in the movie they were slimy gray people with huge teeth. The stuff of nightmares. They literally tear Finnick to shreds, and I’ve lost all sense of good in the world.

I’ll stop with the spoilers now and just say that I loved the movie. I really did. It was the perfect catharsis for this series that we have all been so invested in for years. And I know splitting the final book into two movies is getting sort of old (Harry Potter and Twilight with Divergent on the way), but I feel like it’s the best way to give the fans what they crave — to live in this fantasy world a little bit longer. We get to admire Katniss’ strength, Peeta’s sweetness, Haymitch’s bluntness, and Gale’s face for just another two and a half hours. And to wrap it all up, we get a letter from Annie with updates on everyone else in the Capitol, plus a picture of the baby she and Finnick made before his death. Then finally, the sweet epilogue ending comes, and my sense of good is restored.

Was it a cinematic masterpiece, fast tracked to the Criterion Collection? No. Was it completely awesome? Yes.