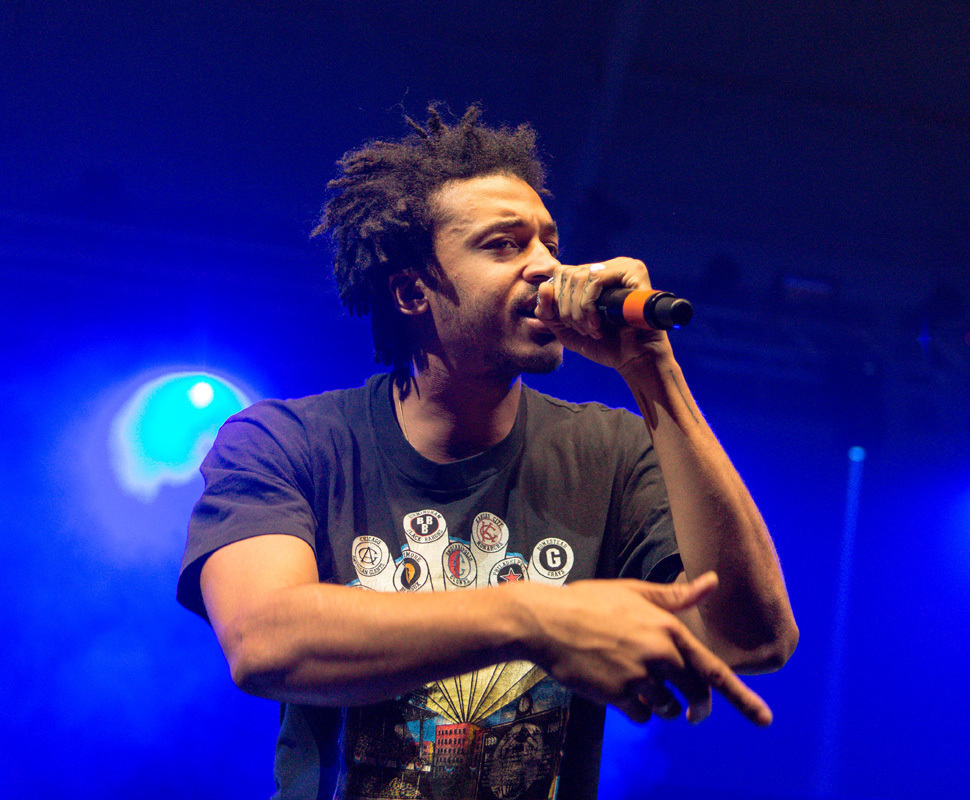 The doors to the concert opened around seven o-clock, and people slowly started to file into the Wiegand Gymnasium. Either the level of excitement in the room was very minimal, or there were just not as many attendees as there seemed to be at previous Carnegie Mellon fall concerts, but something seemed slightly off about the overall vibe within the crowd. Nevertheless, I put all that behind me and looked forward to the concert in high hopes: I was determined to have a good time.

Opening for Danny Brown was Ratking, a punk-rock inspired hip-hop group from New York City. Ratking, whose current touring members are rappers Wiki, Hak, Sporting Life, released their first hip-hop EP, 700 Fill, in 2011. The group has since then been known for several Wu-Tang Clan inspired tracks and a number of concert performances along side popular rapper Earl Sweatshirt.

Ratking kicked off the concert with a lot of strong energy. The crowd bounced along to the music and fed off of each other’s high energy. It seemed as though everyone, whether they had any previous exposure to Ratking’s music or not, was having a great time.
I wish I could say the group kept the audience’s enthusiasm up, but it seemed as though after a while, Ratking lost a lot of steam. The dancing, arm waving, fist-pumping and miscellaneous concert activity died down a great deal, and the general excitement level declined. There was a moment of collective energy loss as everyone waited around for headliner Danny Brown to begin his set. Luckily, the audience wasn’t left waiting for too long. Danny Brown took the stage shortly after the hype had died down, and he successfully managed to reestablish the excitement in the room.

In the days leading up to the concert, I tried to better prepare myself as a Danny Brown concertgoer and learn some of the words to at least his most popular songs. Despite myself — and more than a few others — not knowing the words to the majority of the songs, there was an overall upbeat, positive vibe in the room, which I was pleased to see.

Danny Brown sang “Smokin’ & Drinkin’, ” which significantly increased the crowd’s hype level. This was the first of his singles that he sang and is one of his most popular songs to date. During his set, he sang several songs off of his album Old as well as a couple songs off of his debut album The Hybrid. In the middle of the set, he sang an audience favorite, “25 Bucks.” It was refreshing to hear the crowd chanting and singing along to the lyrics, after the stream of songs that I, among many others, did not know.

After about half an hour, the concert reentered that odd stage of being sort of excited and kind of mellow, due to the fact that not many people knew all of Danny Brown’s songs. His popular song, “Dip,” came just in time, launching the crowd back into a high-energy state — the screaming, singing, and jumping resumed.

To Danny Brown’s credit, he seemed to be aware of the audience for which he was performing, which is always nice to see in a performer. The placement of the songs supported a general flow of excitement throughout the entire concert; the mix of popular hits and throwback songs was well thought-out. Just as the crowd would die down, a popular hit would pull everyone back in and have the crowd bouncing up and down once more, fist-pumping into the air, the floor of Wiegand Gym doing its best to support the collective pounding.

The concert was winding down, and my opinions on the performance at that time were generally positive. Both the crowd and the performers seemed to be having a great time, and everyone was dancing and singing along. Suddenly, Danny Brown shouted the classic “Thank you, Pittsburgh!” and quickly exited the stage. There was hardly a transition between the song-ending to stage-exiting.

Despite the oddity of Danny Brown’s exit, the crowd waited in anticipation for an encore song or two, which we all collectively assumed was soon to come. The audience dissipated slightly, but there was still a respectable amount of onlookers chanting “Danny! Danny! Encore! Encore!” After about ten minutes of a background DJ playing random remixes of popular music, the DJ unplugged his mic and gave an awkward wave to the front row. Was that really it? It seemed odd that there was no encore, but perhaps that just wasn’t Danny Brown’s style. I checked the time on my phone. 9:15. Danny Brown had barely performed for 40 minutes.

Slowly but surely, everyone in the crowd realized that there was not going to be an encore. People left the gym, the majority of them in some sort of awkward, post-concert confusion. It felt like the concert equivalent of a cliffhanger, and it was hard to comprehend how abruptly the performance transitioned from maximum energy to nothing at all.

All in all, Danny Brown gave an exciting performance that had the crowd throwing fists into the air, singing along to popular hits, and literally rocking the floor of Wiegand Gym with intense raving and dancing. Unfortunately, it’s likely the awkwardly curt ending of Danny Brown’s performance will be the thing most of the audience most readily remembers.