To conquer fear after Paris attacks, search for "helpers" 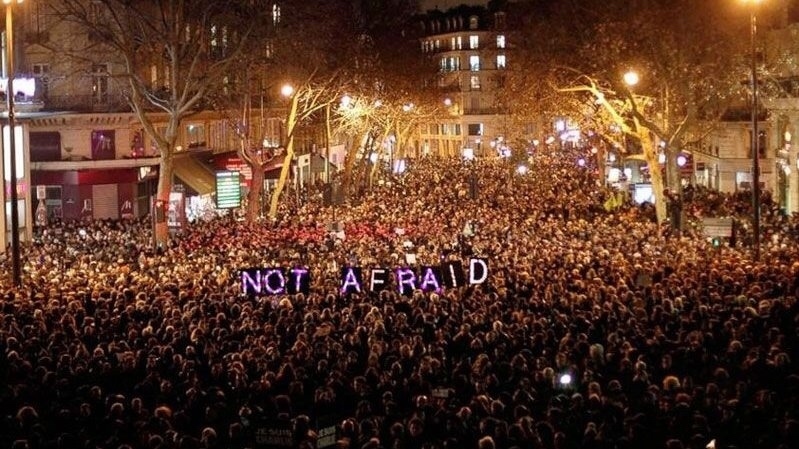 To conquer fear after Paris attacks, search for “helpers” (credit: Courtesy of Eric Salard via Wikimedia Commons)
Editorials featured in the Forum section are solely the opinions of their individual authors.

The world has always been a scary place, but in this era of instant communication and constant access to social media, we are bombarded day-in and day-out with tragedy. Open up our laptop, and the first thing that pops up is a news story about death threats on college campuses. Turn on the TV and see live footage of the terrorist attacks on Paris from a cell phone video. Open the newspaper and every headline convinces us that circumstances are dire, and the future looks bleak. Today looks bad, and tomorrow looks worse.

This message is discouraging and upsetting. It is being shoved down our throats every waking moment. I'm not saying we should ignore the problems of the world or that we must fix them all. But we must have hope for a brighter tomorrow. This is not easy. In fact, it is probably one of the hardest things to do, but a brighter future will not exist until we start believing in one.

The day after the Paris attacks, I saw a terrific quote by Pittsburgh’s own Fred Rogers: “When I was a boy and I would see scary things in the news, my mother would say to me ‘Look for the helpers. You will always find people who are helping.’” This mother's inspiring and undeniably true message, intended quell the fears of a scared little boy, is one that we all should take to heart.

In times of tragedy, we simultaneously see the best and worst of humanity. On the night of the attacks, amid chaos and panic, many French citizens opened their homes to provide refuge to those affected. A security guard at the football stadium prevented one of the suicide bombers from entering, saving the lives of thousands. In the Bataclan, one man identified only as “Sebastian” saved the life of a pregnant woman who was dangling from a window in a desperate attempt to flee the terrorists. On that night, countless individuals made personal sacrifices to help those around them; most of these stories of our “helpers” will remain unknown. But these people do exist, and we must not forget that.

It is so easy to hate after a tragedy, to make sweeping generalizations and become paranoid with fear. But this is precisely what we must avoid, because terrorist organizations like ISIS want us to become fearful and hateful, and to seek vengeance against innocent people.

Antoine Leiris, a Parisian who lost his wife, posted a moving tribute with the powerful message: “I will not give you the gift of my hatred.” Leiris recognizes that hatred is what motivates terrorists, and in the wake of such a tragedy, he has the insight for which we all must strive.

People tend to lose hope unconsciously, falling into seemingly endless despair and darkness, but if we do this we are truly doomed. It is particularly important that bright, young, and eager students do not lose hope. As the next generation, we hold the power and responsibility to change the world for the better. Every single student on this campus can make the world a better place in some way, no matter how large or small.

The way to begin is by looking for the helpers. Once you find them, become one. And once you are are one, teach others how to follow your example. If we do this, we can slowly but surely transition from a world plagued by hate and fear to one saved by fearless helpers.