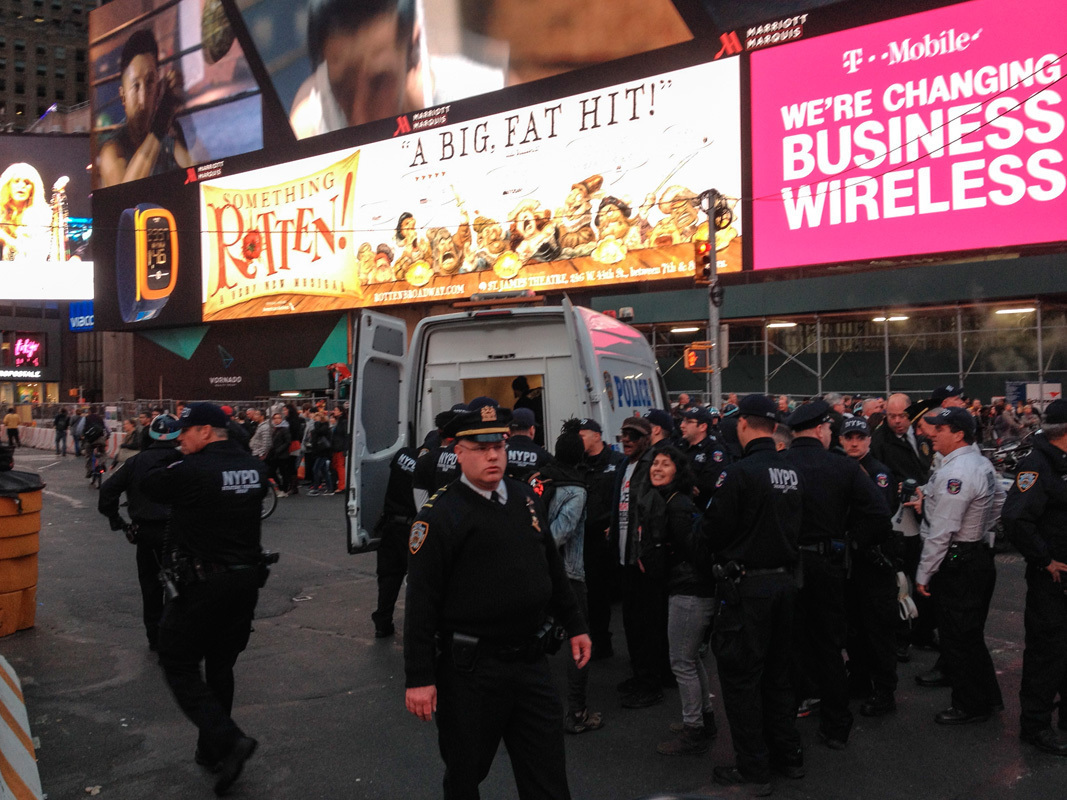 Credit: Brian Walsh/
Editorials featured in the Forum section are solely the opinions of their individual authors.

New Yorkers rarely seem interested in what’s going on. This makes locals fairly easy to pinpoint: they walk around with “I’ve seen it all” attitudes. Snobbish, yes, but also quite well founded. I personally know New Yorkers who would not give a second glance to a naked person walking down the street. New Yorkers are truly a hard-to-surprise breed. So I wasn’t utterly shocked when I witnessed a rather unremarkable case of civil unrest in Times Square last weekend: the Rise Up October protests.

I stopped to take a good look anyways. I don’t wish to belittle the Black Lives Matter movement, and quite to the contrary, I am sympathetic to the cause of fighting police brutality and mass incarceration. But I also don’t want to misrepresent the incident as something more than it actually was. The police contained it after a short-lived brawl and few media outlets ended up giving the protesters coverage.

I might not be a New Yorker, but I am an Istanbulite, a person who is equally if not more used to seeing crazy stuff happen right in front of their eyes. Two years ago, I happened to be in Taksim Square during the Turkish Gezi Park protests, a nationwide condemnation of the ruling party that sprang from plans to build a shopping mall in one of the few urban green-zones in Istanbul. Though the dynamics of the two movements are not identical, both include factors such as police brutality and the oppression of ethic minorities that have led to direct action by frustrated masses.

No matter how unique a social movement appears to be, I believe that the plea for social change all across the globe is centered around the same themes: liberty, human rights, and equality. As a proponent of the Gezi Park movement, I could relate to protesters in New York demanding equal treatment from law enforcement officials. Unfortunately, I could also relate when a peaceful gathering intended to protest police brutality ironically ended with more police brutality.

When I sensed that tensions were growing, my journalist’s instincts took over, and I approached the protesters. I know that transparency means little these days, but I began to record anyways. I saw protesters getting kicked by cops as they laid defenseless on the ground. I heard people shout that they would not commit suicide under police custody, bringing attention to suspicious deaths of detainees such as Sandra Bland. But by far the most tragic thing I witnessed was people taking selfies with such chaos in the background, grinning ear-to-ear.

My home country is as polarized as it gets. The massive support thatexisted for the Gezi Park was greeted with an equally sizable opposition. That pretty much sums up Turkish politics: We either stand together in solidarity or we fiercely dissent. But at least we usually care enough to dissent. When people are so indifferent to the issues of their fellow citizens that they treat their demands for justice as petty Snapchat stories, we’ve reach a whole new level of low.

This is not an American issue; the growth of apoliticism is global. People everywhere are losing their ability to empathize. As technology permeates culture more and more, personal communication suffers. When we fail to communicate, we withdraw into our little bubbles. As our bubbles shrink, so do our comfort zones. Instead of confronting deeply entrenched political issues such as racial segregation and Islamophobia, we pretend that they do not exist.

Ignoring social movements that demand racial equality can be convenient and comforting. But indifference will make neither the movements nor the problems go away. History has shown this repeatedly. We need to engage. We need to pay Black Lives Matter the attention it deserves.