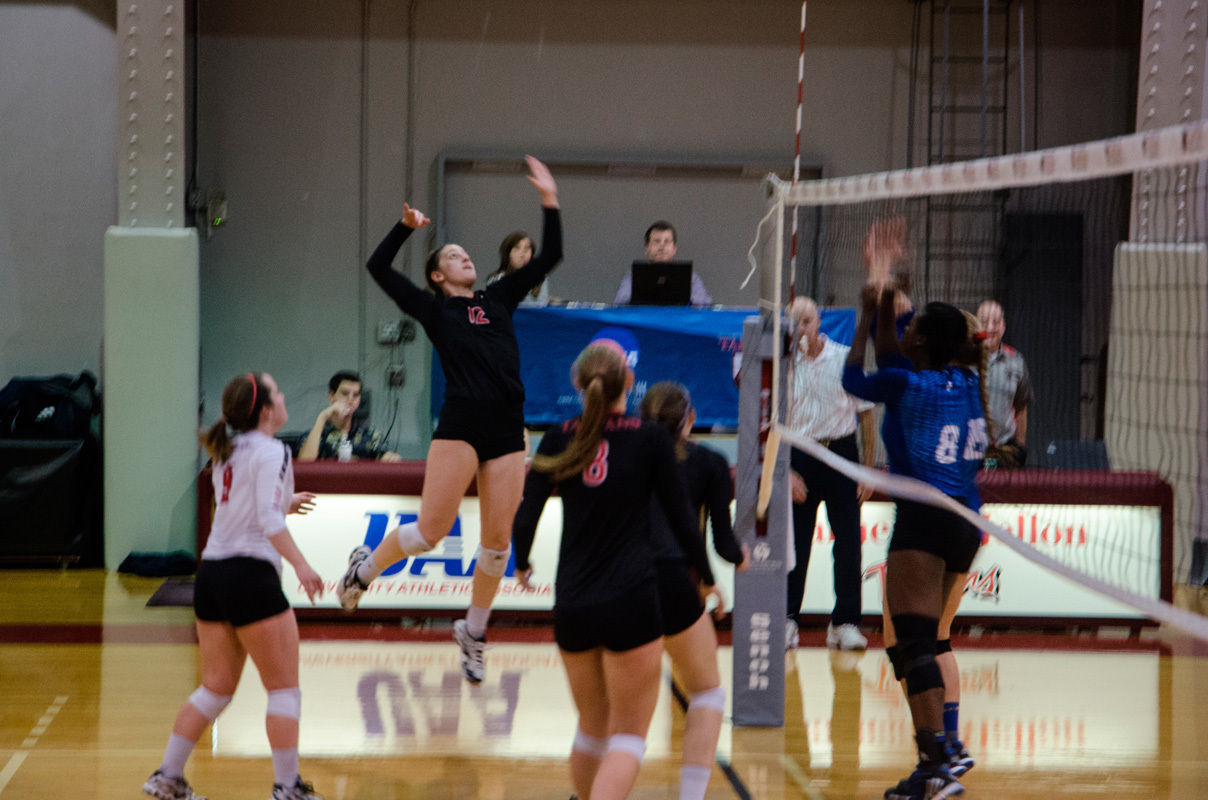 First-year outside hitter Sydney Bauer sets herself up for a spike. Bauer racked up several kills to catalyze the Tartans. (credit: Jordan Safer/)

Looking ready for championship season, the Carnegie Mellon women’s volleyball team hosted Marymount University in a battle to move on to the Eastern College Athletic Conference (ECAC) South Regional Championship semifinals on Wednesday Nov. 11. Overpowering an energetic attack from Marymount, the Tartans landed shots when it counted and secured a 3–1 victory to advance.

The Carnegie women were aided by clean play through the sets, keeping their shots in play and working to return some rocketing spikes from Marymount. As Marymount struggled to keep the ball in play under pressure, the Tartans stayed patient and let the opponents make the mistakes for many key points.

Faced with an aggressive attack from Marymount, defensive play by junior libero Molly Higgins was a huge part of the Tartan success. Calling on her team to “Close it down!” in the third set, Higgins held up for them in the back end, adding a one-handed dig for the highlight reel.

The team went down early, struggling at the start of the first set before putting things together and competing through the rest of the game.

The momentum shift came early, with the Tartans down 18–13 in the first set. With the team struggling to score points on the opposition, first-year outside hitter Sydney Bauer made her presence known with a kill down the middle of the defense sparking a run. The Tartans responded to her efforts and fought to close the gap to 22–21. Bauer finished what she had started, recording back–to–back aces off the Marymount defense to give the Tartans their first lead of the night.

Higgins said of the struggles, “I think what’s hard about playing teams that are out of your region is you don’t really know what to expect”. Even facing a team with a style different from what they were used to, the Tartans eventually figured out the new rhythm and got themselves on track.

The first set opened up with Marymount out ahead, picking up the first point of the game and building a lead up until the late set rally by Bauer got the Tartans back in it. Everything didn’t fall into place from there, as Carnegie Mellon fought through a long back and forth for the win, dropping match points at 25–24, 26–25, and 27–26. The team finally closed out the set on defense with a great block by Bauer and junior middle blocker Jackie Gibbons to get the win.

Carnegie Mellon came out firing in the second set, as a Bauer kill over the middle deflected out the back end to break a 4–4 tie. The team pressed, running up their lead to 12–4 in what looked like a runaway set. However, Marymount rallied back as the Tartans struggled to score again, tying the set at 17. Another push got the team back out ahead at set point, and this time it only took one try to capitalize, as first-year outside hitter Lauren Mueller blocked in a shot for a 25–22 win.

After a very back and forth second set, both teams came out with more even play in the third. With the exception of an early hole (9–14) for the Tartans about midway through the set, the teams stayed close. The gap was short–lived, as junior setter Emily Newton put up the ball on the right side of the net for first-year outside hitter Sarah Jurgens to smash it cross court to back left corner of the Marymount side.
Both teams stayed even late in the set with ties at 17, 18, and 19 before Marymount got out ahead. Down two, the Tartans made a final push with a Jurgens kill from the right off a Newton assist, but it wasn’t enough, as the Tartans dropped the set for the only time of the night, 23–25.

The fourth set went back and forth as well, with a seeming momentum shift in Marymount’s favor early, but Carnegie Mellon found a lead with a block by Mueller and sophomore middle blocker Eliza Donahue, going up 10–9. Another block by the same pair, followed by a block by Donahue and Jurgens, got the Tartans going, taking them ahead 16–11, a lead they would never relinquish.

As the Tartans looked to translate their lead to victory, the Marymount side showed their desperation, refusing to let a Tartan point fall to seal the game. On the final point of the game, Marymount played furiously in an endless point, keeping multiple game–ending spikes off the ground. Shots by Jurgens and Donahue never found home, as Marymount players kept the play going for minutes. Finally, the Tartans managed the dagger, as Bauer took a Newton assist and put the ball on the ground at the heart of the Marymount defense, right in the middle.

Throughout the affair, Carnegie Mellon put on a show of strength, staying positive and very focused in a competitive game. Other than a few missed shots early in the first set, the Tartans kept their shots on target, making the other team miss and playing a full competitive effort.

Higgins says the team will look to be on their “A–game 100 percent of the time”, taking the momentum from this game and going for a win in the ECAC South Regional Championship.
Unfortunately for the Tartans, that never came to fruition. After trading sets with Bethany on a way to a 3–2 victory, the Tartans dropped the finals 3–1 to Swarthmore, bringing a successful season to a premature ending.