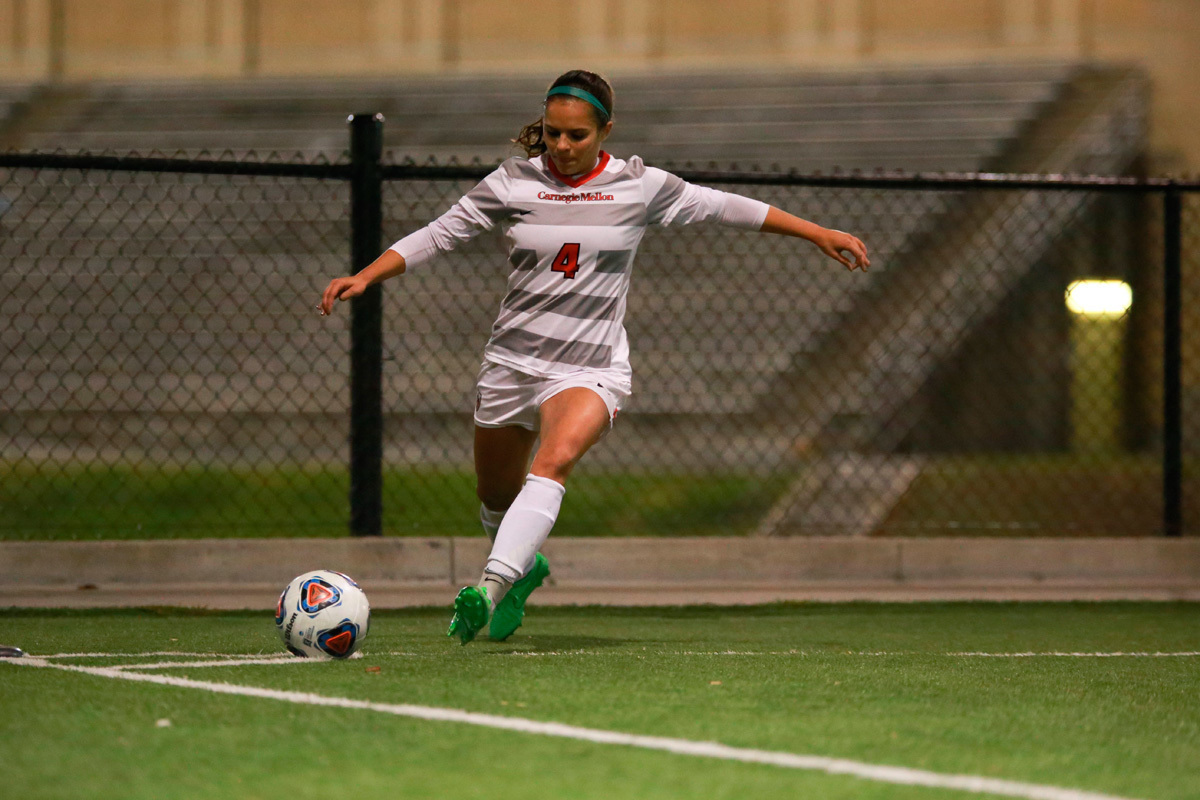 The Carnegie Mellon women’s soccer team took on Cabrini College in the first round of the 2015 NCAA Division III Women’s Soccer Championship on Saturday. A defensive battle in the first half gave way to an onslaught of scores in the second as the Tartans took the game 5–0, advancing the Tartans to the next game and tying a school record for wins with an overall 16–1–1 season record.

The first half of play featured both teams treading cautiously, testing their respective defenses. The Tartan offense was the first to strike. In the 29th minute, sophomore forward Sienna Stritter sent a pass from junior defender Samantha Smith high from close to midfield, capitalizing on an uncovered goal and putting the Tartans up 1–0. The Tartans kept up the pressure against Cabrini, quickly getting a corner kick and some deep throw-ins. The first half came to a close without much Cabrini pressure on the Tartan defense.

In the second half, the Tartans attempted several shots to open up and keep Cabrini from getting a chance to score. The continued pressure eventually led to Stritter’s second goal of the game and fifth goal of the season as she drove a ball that bounced off of the goalie’s hands into the net in the 49th minute. A free kick off a foul nearly ended up in the net again, but Cabrini was able to get the ball out of bounds and keep the Tartans from doing anything with the ensuing corner kick. In the 68th minute, senior forward Alli Mcugan’s continued pressure on Cabrini’s defense resulted in a goal after receiving a pass from sophomore midfielder Morgan Kontor. Sophomore midfielder Nicole Winegardner scored the Tartans’ fourth goal of the night off of a pass from junior forward Megan Bartoshuk in the 80th minute. In the 82nd minute, Winegardner scored once more for the Tartans with an assist from Bartoshuk, bringing the game to 5–0.

“It was great to get a win in front of our fans,” Stritter said after the game. The win marked the Tartans’ eleventh shutout of the season, largely driven by the offensive pressure as junior goalkeeper Katie Liston only needed to make one formal save. Stritter acknowledged that the goal differential was unexpected but was pleased that the offense was able to drive the game. “We have such a great backline. To put away one goal is important. We were on a roll today.”

On Sunday, the Tartans took on SUNY Oneonta. This game featured an intensely defensive battle with Liston and both Oneonta goalies saving quite a number of shots during regulation. As overtime began, a Carnegie Mellon foul gave Oneonta a chance to win on a free kick, but Liston was there to save the shot. The Tartans then quickly maneuvered the ball down the field, and in the 92nd minute, Stritter fielded a pass from sophomore midfielder Haili Adams, broke past the defenders near the goalkeeper’s box, took one touch around the right side of the keeper, and scored for the Tartans.

The Tartans will advance to sectionals and take on Calvin College.