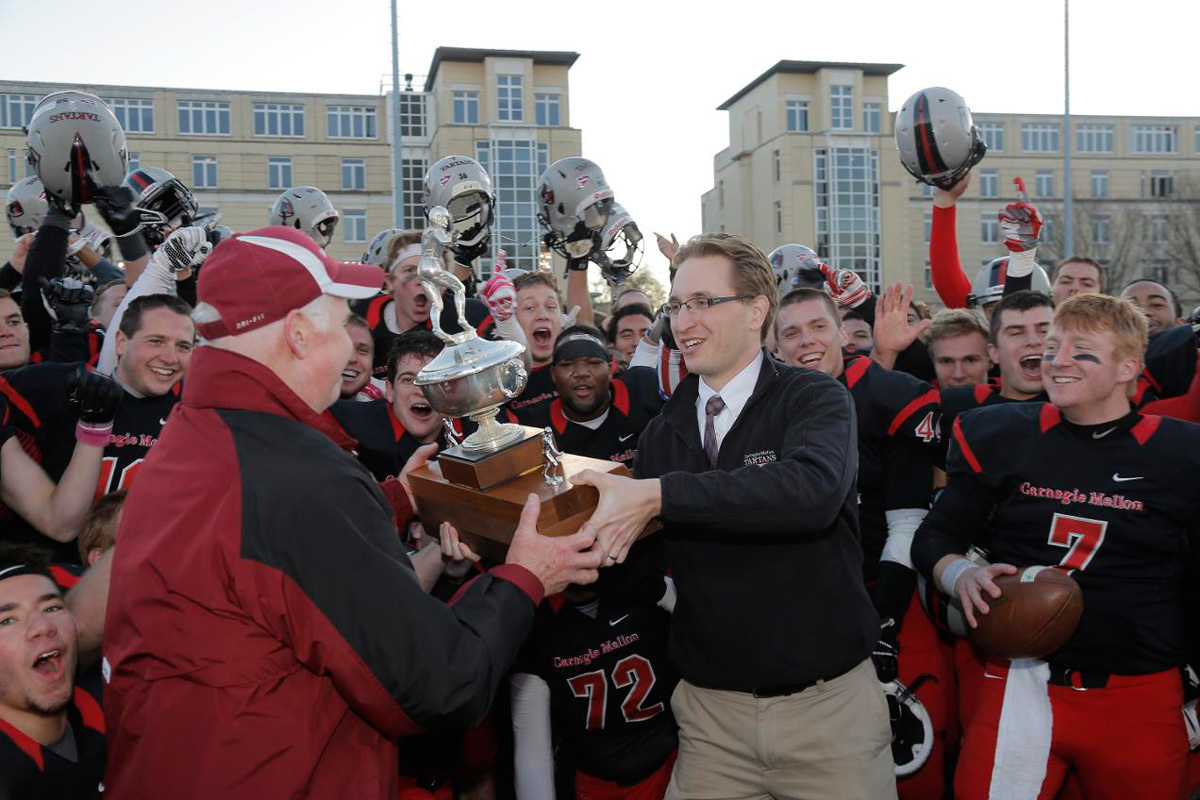 The Carnegie Mellon football team accepts the UAA championship trophy after earning a share of the conference championship. (credit: Courtesy of CMU Athletics)

The Carnegie Mellon football team played its season finale against Case Western Reserve on Saturday in the 30th annual Academic Bowl. With a share of the University Athletic Association (UAA) championship on the line for both teams, the Tartans ended up on top 52–42, bringing their record to 7–3 overall and ending the season on a six game winning streak during which they scored over 40 points in each game.

Though the weather was chilly and windy, the Tartan offense ignited quickly as sophomore running back Sam Benger burst for a 58-yard run. Senior quarterback Andrew Hearon capped off the opening drive with an 11-yard touchdown pass to sophomore wide receiver John Prather and put the Tartans up 7–0.
Case Western initially tried to counter with a long drive, but a holding penalty that negated a Case Western first down cut their drive short. On the Case Western punt, sophomore safety Drew Fitzmorris fumbled the punt, turning it over to Case Western at the goal line and leading to a touchdown run to tie up the game 7–7.

Though the early lead was quickly lost, the offense worked to reverse the sudden shift in momentum. Benger led the Tartans offense back into Case Western territory, but the field goal attempt by junior placekicker Gabe Renna flew wide left, turning the ball back over to the Spartans. On Case Western’s next possession, the running game generated plenty of positive yardage for the Spartans, but a tipped pass led to a fourth down attempt in which the Tartans defense covered everyone and allowed the offense to take over with good field position. On a play when Case Western showed a heavy blitz and instantly got to Hearon, the quarterback still got the ball out deep to senior wide receiver Graham Schilling, resulting in a touchdown to put the Tartans up 14–7.

On the next drive, a fumble by the Spartans negated a play that would have gotten them a first down, forcing Case Western to try a pass that fell incomplete, returning the ball to the Tartan offense. However, a Hearon pass flew into the hands of a Spartan defender who quickly dashed into the endzone and made the score 14–14. A few runs by Benger and one by Hearon took the Tartans close to Spartan territory as the first quarter came to a close.

Opening up the second quarter, Hearon threw another interception on third down, but a fumble forced by senior linebacker Nico Comsa and recovered by junior defensive end Brian Khoury gave the ball right back to Carnegie Mellon. The Tartan offense took advantage of its second chance, starting off with a 25-yard run by Benger. Hearon attempted two strikes into the endzone, with both passes falling incomplete. Hearon then scrambled for a first down, but a holding penalty brought the Tartans back to third and long. The penalty would not keep the Tartans down as Prather managed to haul in a long pass to keep the drive alive. Three Benger runs amounted to two yards, but the Tartans attempted a fourth down conversion, resulting in a touchdown pass to Schilling and putting the Tartans up 21–14.

The next drive for the Spartans started at the three-yard line after excellent kickoff coverage and an illegal block penalty. The pressure lasted only one play as a long pass got Case Western out of a dangerous situation. However, a sack by senior defensive tackle Marcus Anthony forced another fumble, recovered by sophomore outside linebacker Kyle Brittain. The Tartan drive started with a fumble by Hearon, but Benger kept the ball in the hands of the offense. Undaunted by the fumble, Hearon took the next play himself, setting up third and short. After an overthrown ball, the Tartans decided to go for it on fourth down. Though Hearon managed to scramble for a first down, a holding penalty negated the positive yardage, forcing the Tartans to punt.

After placing Case Western at the four yard line, the Spartans managed to get off their goal after a blown coverage. However, the Tartans defense was able to stop a Spartan run on fourth and short, giving the offense another drive with very good starting position. With another fourth down and short for the offense, the Spartan defense thought they had stopped Benger at the middle of the field, but Hearon fooled everyone by taking it himself to the outside on a 15-yard touchdown run that put the Tartans up 28–14.

The Spartans started to drive down the field on the next series with several long completions, getting down to the Tartans goal line before the Spartan quarterback took it in himself and making the score 28–20 as the Tartans blocked the extra point attempt. After the kickoff flew out of bounds, the Tartans came out rushing despite having less than two minutes remaining in the half. Though the Tartans managed to get close to another score, a personal foul penalty forced the Tartans to try a field goal that just fell short.

The second half opened up with the Spartans driving down the field before Comsa intercepted a pass that gave the Tartans the ball in Spartan territory.
A pass interference penalty kept the Tartans’ drive alive, and though a personal foul penalty put the Tartans in a tough spot, Hearon was able to make another strike to Schilling and put the Tartans up 35–20.

The Spartan offense, however, brought the ball back down to Tartans’ territory, and a blown coverage gave a touchdown to Case Western, making the score 35–27 Carnegie Mellon.

The Tartans bounced right back, driving to the Spartan redzone with a balance of passes and runs before Schilling recorded his fourth touchdown of the game and got the Tartans up 42–27. A facemask penalty on the kickoff gave the Spartans great position, and a deep pass that got Case Western to the goal line led to a short touchdown run, closing the gap to 42–34. On the next drive, what looked like a sack for Case Western turned into a long scramble by Hearon. After missing a shot to junior halfback Zach Cree, a sack on Hearon forced the Tartans to punt. The Tartans defense, however, managed to force a three and out on Case Western, and Fitzmorris managed to get a good punt return before a penalty brought it back 15 yards. Benger recovered that yardage on the next play to close out the third quarter.

At the start of the fourth quarter, a holding penalty was rendered irrelevant as Benger recovered more than the penalty yardage, continuing to run through Case Western’s defense. In the last play of the drive, Benger fought through a number of Spartan defenders before getting into the endzone and putting the Tartans up 49–34. The ensuing kickoff return got the Spartans close to midfield to open their next drive, but the Tartan defense forced another three and out. The next drive saw the Tartans begin to run the clock down as they fed Benger the ball quite a number of times before punting the ball away. The Spartans began driving the ball downfield toward the goal line, and the Spartans managed to complete a fourth down touchdown pass. Case Western made the two point conversion, bringing the score to 49–42 and putting the pressure back on the Carnegie Mellon offense.

The offense, however, proved to be more than capable of handling the pressure.

On the first play of the drive, Benger looked like he might have been tackled immediately, but he pushed through and earned a first down. After a few more runs, Hearon threw deep to Schilling and got the Tartans down to Case Western’s 30-yard line. Benger’s runs continued to keep the Tartans offense on the field and ate up all of the Spartans’ timeouts. Hearon tried to get a game-sealing touchdown to Schilling, but the incompletion forced the Tartans to try for a field goal, which put the Tartans up 52–42. The Spartans took advantage of a Tartan pass interference penalty on the next drive to get down the field, but failed to score on fourth and goal, sealing the Tartans’ victory.

The win marks the first time since 2006 that Carnegie Mellon defeated Case Western and the first time the Tartans beat a top 25 ranked football team since the official Division III polling began in 2003. “The win feels amazing,” Schilling said after the game. His career-best 207 receiving yards and four receiving touchdowns highlighted the offensive effort that has earned the Tartans the UAA co-championship with Washington University in St. Louis. Though the Tartans started the season 1–3, they managed to finish strong over the past six games.

“We all just believed in ourselves. We had some tough games early on, but we knew we had a great team.” In particular, Schilling considered the offensive linemen the critical component of the offense’s superb performances.