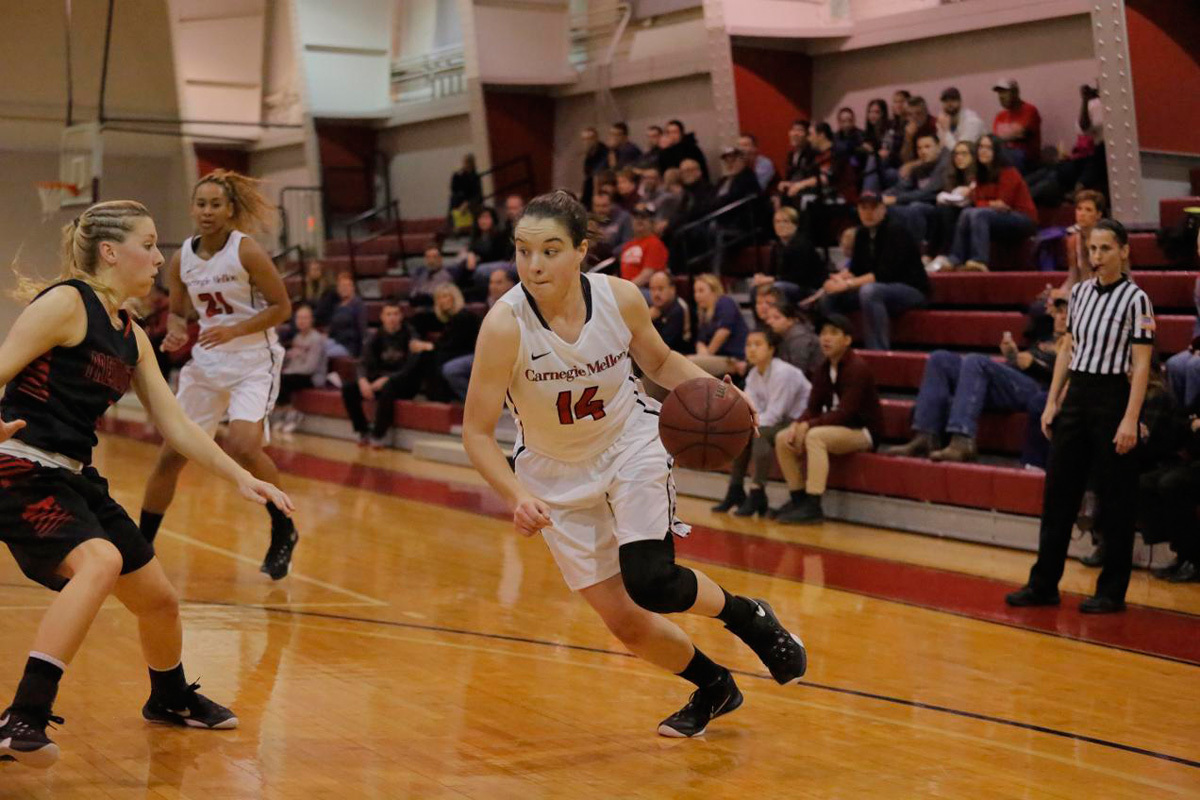 The Carnegie Mellon women’s basketball team took to the court for the first time this season on Friday night to face off against the Washington and Jefferson Presidents. The Tartans ultimately emerged victorious with a score of 95–63, due in large part to the efforts of D3hoops.com All-American honoree junior Lisa Murphy, who also became the tenth Tartan to score a thousand career points, ending the game with a total of 33, the most of four Tartans who scored in double digits on Friday.

The Tartans established dominance quickly, opening the game with an impressive 11–0 run during the first three and a half minutes. The Presidents slightly reduced this lead toward the end of the first quarter, but the Tartans went into the first break with strong scores from both Murphy and junior Jackie Hudepohl, putting the Tartans up 22–12 heading into the second.

Carnegie Mellon again opened with multiple unanswered scores in the second quarter, gaining a 32–12 advantage as sophomore Zoe Zawisa and senior Liza Otto made some impressive shots against the Washington and Jefferson defense.

Otto led scoring in the second quarter with seven points, and the Tartans went into the half comfortably up 47–26.

The third quarter saw Carnegie Mellon’s dominance continue as they maintained the nearly twenty point lead that they had established earlier in the game. Murphy shined here, scoring ten of the Tartan’s 18 total points in the period, and went into the final section of the game just nine points shy of her 1000 point record.

While the Tartans continued to shut down the Presidents in the fourth quarter, Murphy was focused on her goal. She finally reached it with just under four minutes left in play, with a set of back–to–back layups, the second of which gave her 33 points on the night and 1001 points total on her career.

These scores also put the Tartans up 84–56, and the hope for the Presidents to get back into the game seemed to be gone.

The Tartans showed no mercy, however. They went on to score another eleven points in the final three minutes of the game, notably with a beautiful three pointer as well as a clean jump shot from sophomore Madison Watson. These scores were also the first of her career due to sitting out her freshman season because of an injury. The Tartans closed out the game with a score line of 95–63.

In total, the Tartans shot 54.1 percent from the floor and managed to out rebound the Presidents by 18 boards, 55–38. While Murphy led all Tartans scorers with 33 points, she also pulled down 11 rebounds, earning herself a double–double for the 26th time in her career. Other Tartans joining her in double–digit scoring were Otto and Hudepohl, each with 14 points, as well as sophomore Anna Novak with 10.

The Tartans women’s basketball team will take to the court again on Friday, Nov. 20 against Muskingum University at the Allegheny College Tip–Off tournament at 4 p.m. The Tartans will look to continue their strong start to the season on the shoulders of their All–American, and with cohesive team play that is sure to propel them forward in the standings.