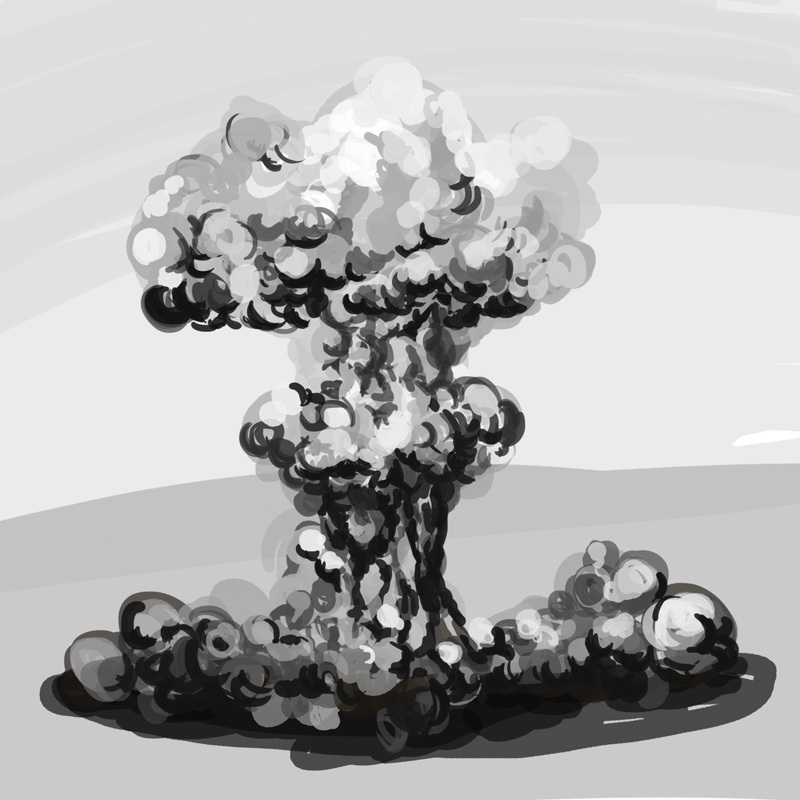 Since the invention of gunpowder, chemical reactions have fueled a plethora of weaponry. None, however, have exhibited effects as deadly or as lasting as the atomic bomb, which was used for the first and only time during World War II when the United States dropped atomic bombs Little Boy and Fat Man on Hiroshima and Nagasaki, Japan, respectively. Although no atomic weapons have been used to date since, the threat they pose stems from their enormous chemical potency.

To start, we must understand what an atom is and what it is made of. According to atomic theory, an atom is the most basic unit of a chemical element. All of the matter around us is composed of atoms, each of which are made of up protons, neutrons, and electrons. Within an atom, protons and neutrons sit at the center in a ball called the nucleus, and electrons orbit around this nucleus in an electron cloud. The attractive bonds between the positive charge of the protons and the negative charge of the electrons are what provide the energy to hold an atom together; neutrons exhibit no charge and merely contribute mass to the atom.

Despite how trivial this atomic model may seem now, during the 20th century it was new to scientists. Once this model was discovered, though, scientists began experimenting with the atom to determine if its nuclear energy could be harnessed. It wasn’t until 1938, when scientists Otto Hahn and Fritz Strassmann split an atom through a process called nuclear fission, that the atomic bomb became a real possibility.

During nuclear fission, a single atom of a given element splits into two or more smaller daughter atoms of new elements; for example, a uranium atom can split into krypton and barium atoms. Because splitting an atom causes its inner attractive bonds to break, some of the chemical energy stored in them gets released. Additionally, although the number of protons and electrons doesn’t change between mother atom and daughter atoms, during nuclear fission a few neutrons shoot out and are lost from the mother atom.

The ejection of these neutrons is crucial for an atomic bomb powered by nuclear fission. When designing an atomic fission bomb, scientists use elements like uranium which have unstable atomic properties, making it difficult for atoms of that element to hold themselves together. Due to this instability, a uranium atom only needs a small aggravation to undergo nuclear fission and form more stable daughter atoms. In the process of doing so, however, this single uranium atom ejects several neutrons, each of which in turn collides with other unstable uranium atoms and causes these atoms to undergo nuclear fission.

The result is a cascading chain reaction of uranium atoms splitting, with each successive chain generating a greater number of ejected neutrons and thus a greater number of uranium atoms splitting apart. Each of these fission reactions releases a discrete amount of energy, which accumulates to deliver an explosion equivalent to, in the case of Fat Man, thirty two million pounds of TNT. In order for the chain reaction to sustain itself and generate an amount of energy this large, there must be a minimum mass of uranium present called the critical mass; if the critical mass of uranium is not present in an explosion, not enough neutrons will be ejected by uranium atoms, and the cascade will fizzle.

One of the dangers with accumulating the critical mass of an unstable element such as uranium is that with more mass present, there is higher chance of a single atom being aggravated and spontaneously initiating premature detonation. During World War II, scientists circumvented this issue by engineering a vessel that could hold two subcritical masses of uranium apart from each other, decreasing the likelihood of an atomic explosion being spontaneously triggered.

In order to ensure that these subcritical masses come together and have an appropriate amount of time to react, scientists place explosives behind one of the masses that will detonate based on a pressure sensor. The sensor is designed such that when an atomic bomb is dropped from a high altitude, the sensor will trigger the explosives once it reads an atmospheric pressure corresponding to the altitude above the ground required for optimal uranium detonation.

The atomic bomb was the first nuclear weapon scientists and engineers developed and, since World War II, more powerful bombs such as the hydrogen bomb have emerged. Although they rely on different mechanisms, they still follow the same recipe of extracting nuclear energy from atoms.

Thankfully, atomic energy has evolved to be used in more peaceful applications, such as power generation via nuclear reactors, but the discovery of nuclear energy is rooted in the development of a weapon of mass destruction. With the proliferation of atomic weapons in the world today, it is easy to glance over the devastating impact an atomic bomb can have on a region; Hiroshima and Nagasaki are still recovering today from atomic explosions that occurred nearly seventy years ago. Understanding the sheer power and severity of using one of these weapons can lead to more educated decisions concerning nuclear warfare policy both in America and abroad.