Tales from Abroad: acclimating to Firenze 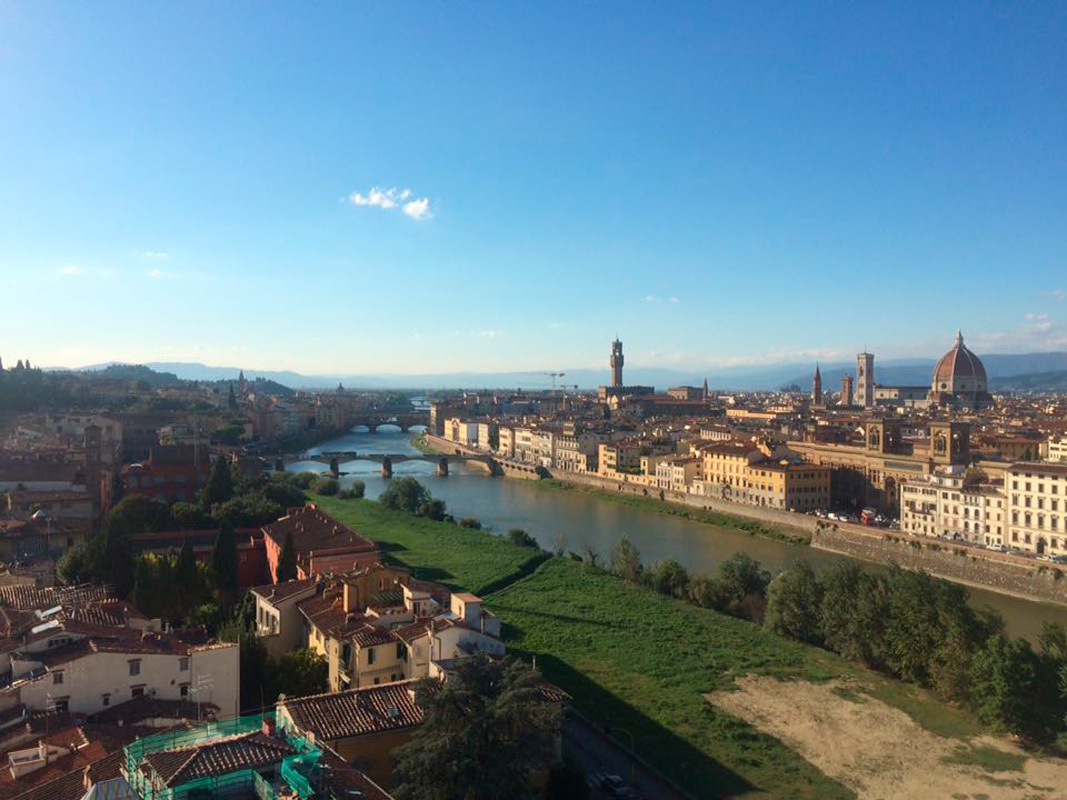 A view of the beautiful city of Florence and the Arne River from the top of Torre San Niccolo. (credit: Autumn Hill/Junior Photographer)

If you haven’t studied abroad, you probably know someone who has. You run into her on campus, ask her about her time away, and she says the typical things. From “It was amazing!” to “You would have loved it!” to “I wish I was still there,” the hype around study abroad never changes. But why? How can countless young adults go to various countries year after year and return with the same enthusiastic message? Is study abroad really that great, or is everyone committed to maintaining its mystique, like the Illuminati? Is study abroad the new Illuminati?

Four years ago, I was a skeptical high school student with questions like these, and for a while I let my doubts get the best of me. I was worried about missing my friends, leaving the senior I liked, getting my license late, and what my parents would say. These seemed like valid reasons, until my friend Meyer returned senior year from spending a year in Spain. Not only did she acquire awesome stories and Spanish fluency, but she also didn’t miss a beat, winning senior class president while out of the country. Meanwhile, everything she left was practically the same, including me with no driver’s license.

Her success taught me that I played it safe when I shouldn’t have. I felt like Eminem was disappointed in me for missing my one shot and letting everything slip. So, I made it my mission to redeem myself in college and do study abroad. Since I now have a few weeks left in Italy, this list will probably change, but here are ten moments that put my redemption off to a great start.

Exploring Italy
Rather than going to all the major European cities, I’ve focused most of my efforts on Italy. I visited Rome, Pisa, Venice, and Cinque Terre and hope to make it to Milan, Naples, and Pompeii before time is up. My logic is that this period of time is the only time I’ll live in Italy so I might as well see as much of the country as I can.

Exploring Europe
Traveling really is a means to an end. Even if I hadn’t chosen Europe, all the other continents are so vast that traveling would have been easy and affordable.

My roommates
I actually didn’t think I’d be close to other exchange students, but my roommates are truly my people. From loving TV to having the same sense of humor, I’ve made lifelong friends that I can’t imagine not knowing.

Receiving Jif Peanut Butter in the mail
If you love Nutella, congratulations! You’ll love Italy. If you love peanut butter like me, you’ll constantly think, “I’ve made a huge mistake.” Italy only carries Skippy, so I either have to sell out and eat Skippy or hold out. I found My American Market, a French website that sells American groceries. Getting Jif felt like Christmas, but other great moments came out of it too. Pop Tarts mesmerize the Italians while all the Americans want to know how I pulled it off.

Food
All the food is incredible and I have yet to have a bad meal. The bad pizza tastes like Digiorno’s or Pizza Hut and the great pizza tastes like heaven and I start crying because I don’t feel worthy. The pastries, though, are essential and gelato once a day keeps the doctor away.

Weather
Florence feels like Pittsburgh in September, except it stays that way for the entire season and will never drop below freezing. I joke with my roommate, who’s from Michigan, that winter is coming, asking her if we’re ready. Meanwhile, everyone around us, including my suitemate from Miami, is investing in coats because the high is 60°F.

Drinking legally
I can’t speak much about Florence’s nightlife, but as someone under the age of 21, casually ordering any drink off a menu feels incredible.

Beautiful people
You saw this coming, but it’s true. Everyone is gorgeous and I try not to think about it. Instead, I may or may not go to this pizza place once a week and flirt with the all male staff when I order. Naturally, the restaurant is called Gusta Pizza.

Walking everywhere
I have always hated exercising, but some wise, sadistic Italian put me in one of the farthest apartments from campus. Since I avoid the metric system, I’m not really sure how much I’m walking but once you factor in the daily battle with tourists, tour groups, pigeons, bikers, taxis, and the occasional carriage ride, it feels much farther than Fairfax ever did. Plus, the campus elevator never works so those 9 flights of stairs serve as my daily cardio.

The Euro
You get a lot of bang for your buck in Europe, or you will once you stop calculating how many US dollars you’re spending. For example, spending 20€ or less in Conad, the Italian grocery store, always gets me a week’s worth of groceries. If every Carnegie Mellon student went into Giant Eagle with $20, how many of us would be done?

Honorable mention: getting stranded at IKEA
Everyone knows that moving doesn’t feel real until you find yourself in IKEA. Two of my suitemates had never been to an IKEA in the U.S. so my roommate and I decided to end this tragedy. The Florence IKEA is so great that Europeans trust each other to bring pets inside and not destroy the place. It sounds absurd, but that IKEA was the cleanest one I’d ever been to. It might have been the best IKEA ever if it weren’t for their café. It was a great Saturday until the shuttle bus didn’t show up. Spirits were high, though, and the IKEA virgins lived to tell the tale.

It’s hard to explain, but to me, study abroad feels like creating an alternate reality for your life. For a few months, you acclimate to a different country, culture, and sometimes language. It’s a very daunting, yet rewarding process, especially for the restless and the curious. You could be right and have a list of reasons for why you can’t, such as your major, your parents, your significant other, Greek life, etc. However, I’d tell you and my high school self what Tina Fey learned from Amy Poehler on Saturday Night Live — “Do your thing and don’t care if they like it.”