Bo Burnham self deprecates to the extreme 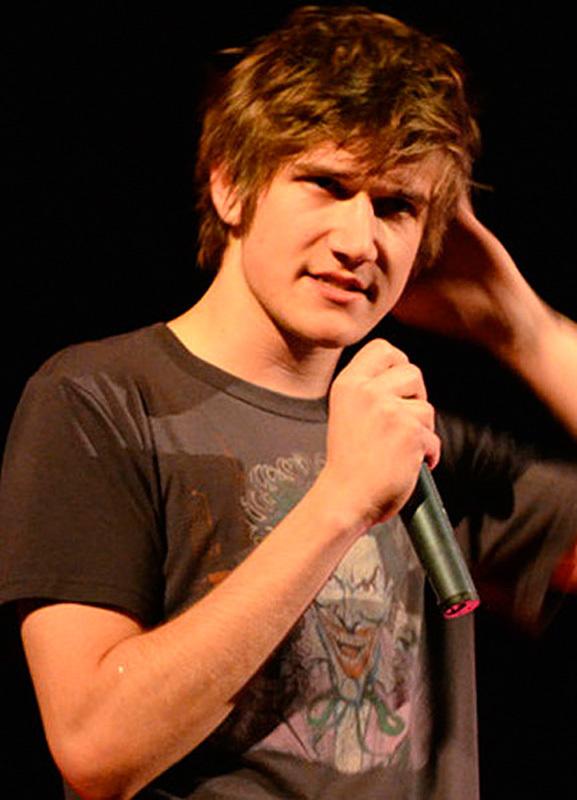 Bo Burnham is a great comedian for the Carnegie Mellon college student with a disillusioned view of the world, but who feels comforted by wise and somewhat disparaging words of encouragement. (credit: Courtesy of Wikimedia Commons)

I didn’t walk into a Bo Burnham show expecting to hear everyone in the audience crack their knuckles simultaneously. But it happened, and it sounded like several thousand cherubs vomited in Carnegie Music Hall. “Watch how good the rest of this show appears now in relation to that sound,” Bo said.

The rest of the show was in fact much better in relation to that hideous sound. Bo has come a long way since his era of YouTube videos and Vines, and even from his last show titled what. If you aren’t familiar with his past work, it often draws from pop culture, social issues, and the state of comedy itself. He incorporates hip hop and satire into many of his pieces as well. His ongoing tour Make Happy delves into, for lack of a better term, more mature content without compromising unpredictability, raunchiness, and silliness. Although to be fair, I might still be the only one who finds farting into a microphone silly.

Like his previous shows, this one included disembodied voices, strobe lights, and plenty of Auto-Tune. There was a bit that portrayed the different ways of preparing a peanut butter and jelly sandwich depending on the state of intoxication. Another bit portrayed a breakup between a long-term couple, in which Bo repeatedly yelled “Eat a dick!” at his now ex-girlfriend until his screams became emotional sobs.

The new songs he performed at this show were arguably more relevant to current social issues than his previous work has been. This included an ironic tune detailing the difficulties of being a straight white man, and the struggles of finding your true soul mate. A note from Bo to straight women, “You might think this [perfect] guy only exists in your mind. Guess what? You’re right.” And to the straight men, “You might think this [perfect] girl only exists in your mind. She’s real, but last week she died. If you want love, lower your expectations.” He adds later, “Deep down you know you don’t deserve [love].”

And lowering expectations seems to be a recurring theme throughout Bo’s work, with his onstage, somehow slightly arrogant persona constantly reminding audience members to expect disappointment. There are brief moments, however, when we as an audience get to see a truer “Bo” on stage.

Referring to his own life, Bo questions his own decisions and whether they’ve made him happy — hence the tour name, Make Happy. Toward the end of his show, with all the lights in the auditorium on so that Bo could see each member in the audience, he knelt down and ranted. Part of his spiel included telling the audience, “We [performers] say follow your dreams. Don’t. If this is your dream, just race for failure. Or, reevaluate because this is not a meritocracy. I’ve had a privileged life, and I’ve been lucky, and I’m unhappy.” Despite the gravity of the topic, Bo still managed to keep the audience laughing and received a well-deserved standing ovation.

Anyone who knows me knows that I’m a sucker for the type of self-deprecating, critical humor — with bits of existential crises scattered throughout — that Bo performs. I also appreciated the honesty incorporated in his work, most notably with one of his opening statements: “Andrew Carnegie, the Donald Trump of the 1890s.”

Make Happy is a more refined, more mature Burnham that’s simultaneously hilarious and severely depressing. He performed a few old songs that, while they are fan favorites, I found cringe-worthy compared to his newer material. I still laughed throughout the entire show but by the time I got home I felt like a train had run over all my hopes and dreams. I’m kidding, kind of. I’m not going to say it’ll make you happy, but it’ll make you feel something in this soul-sucking demon of a school. We may not all be performers, but many of us have faced the difficulty in pursuing what truly makes us happy as we get older.

After seeing the progression in Bo’s work, I’m curious as to what direction his comedy will take in the future. If you can, definitely catch one of his Make Happy shows while he’s still on tour, or just watch it when it (probably) airs on Netflix in the next year or two.