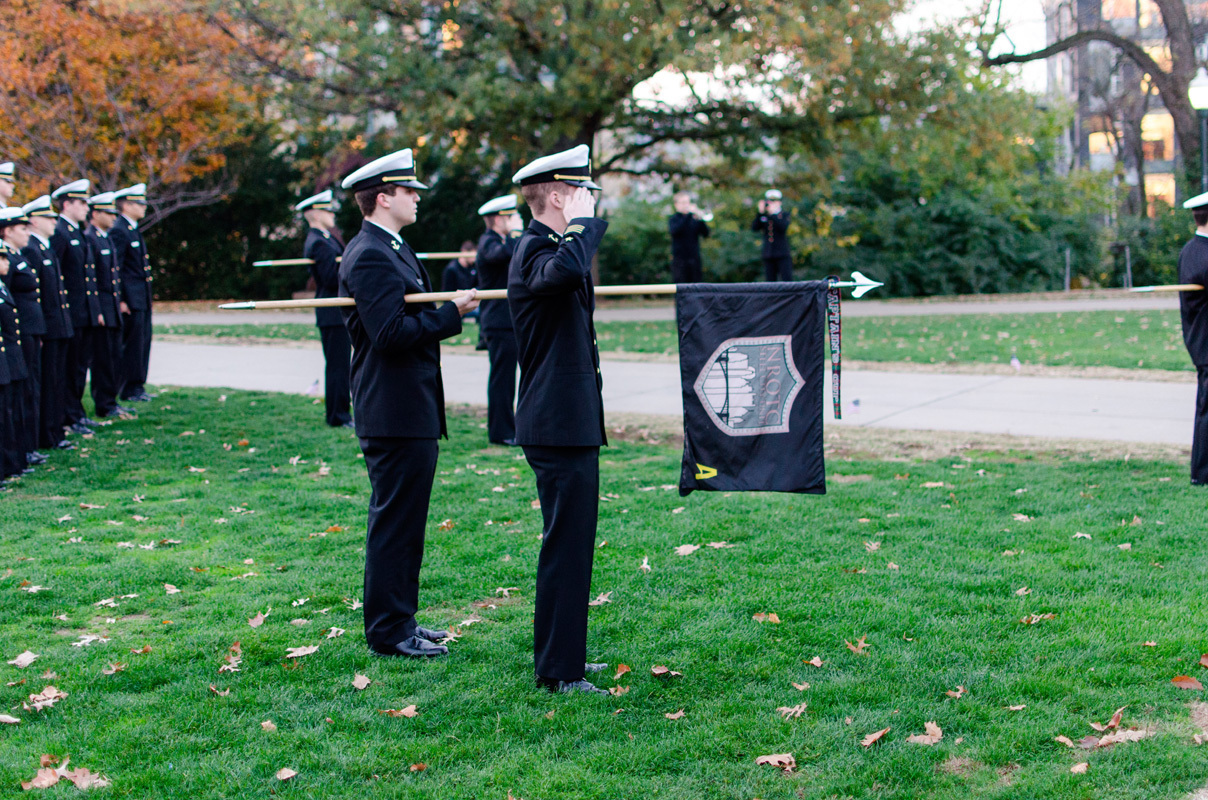 Many veterans were in the audience. An introduction by Captain Jeff Coran included excerpts from President Obama’s Veteran’s Day 2015 Proclamation, in which he states, “Our veterans left everything they knew and loved and served with exemplary dedication and courage so we could all know a safer America and a more just world. They have been tested in ways the rest of us may never fully understand. On Veterans Day, and every day, [they] let us show them the extraordinary gratitude they so rightly deserve, and let us recommit to pledging our full support for them in all they do.”

Hunt reflected on the history of ROTC at Carnegie Mellon, remarking that “Carnegie Mellon has had a long and close affiliation with the U.S. Department of Defense in supporting the military of our country.” Hunt talked about how Carnegie Mellon’s campus was used as a temporary training ground for U.S. soldiers during World War I and World War II, “with students going to and from class alongside soldiers training to defend our country and our way of life.”

However, the Vietnam War era of the late ’60s and early ’70s was marked by widespread student protests and antiwar sentiment across the country. Don Carter, a Vietnam veteran, graduated from the Carnegie Mellon School of Architecture in 1967 as a member of the ROTC program. Carter remarked that during the time period, many universities got rid of their ROTC programs. He was proud and found it a “wonderful thing” to still see Midshipmen (Naval ROTC students) in uniform on campus today.

Another Vietnam veteran, Jay Sukits, now a professor at the University of Pittsburgh’s College of Business Administration, spoke about a fellow Vietnam veteran, a captain and mentor who had trained him, Edward Francis Miles. In 1969, near the Cambodian border, Miles stepped on a land mine as he ran forward to check on wounded soldiers. He sustained horrific injuries, including amputations of both legs below the knee, loss of his right eye, and his right arm rendered permanently useless. “The personal courage he exhibited still stays with me today” Sukits said.

After the war, Miles eventually became an associate director of the Vietnam Veterans of America Foundation (VVAF), traveling the world to raise funds to help war survivors. He worked with the International Campaign to Ban Landmines, which won the Nobel Peace Prize in 1997. He passed away 35 years after he sustained his injuries during the Vietnam War. His name was engraved on the Vietnam Veterans War Memorial in Washington, D.C., on May 4, 2010.

In response to the “protesters and naysayers” of the Vietnam Era, Sukits remarked, “Vietnam veterans served with great honor and dignity. They returned to a country that ignored them at best, and at worst, vilified them”.

Sukits then read a short poem called “Remember Them.” Afterwards, a moment of silence was held during “evening colors,” the U.S. Navy’s ceremonial lowering of the flag at sunset, while the solemn sounds of two trumpets was heard across the Cut.

Near the end of Hunt’s speech, he had remarked, “The military is not just about warfare; indeed, it is also about peace. It is about helping others around the world, who yearn for freedom to achieve, in their own way, the kinds of blessings and privileges that we Americans sometimes take for granted”.

Today, the Naval ROTC unit is hosted on Carnegie Mellon’s campus, while Air Force ROTC and Army ROTC are hosted at the University of Pittsburgh.