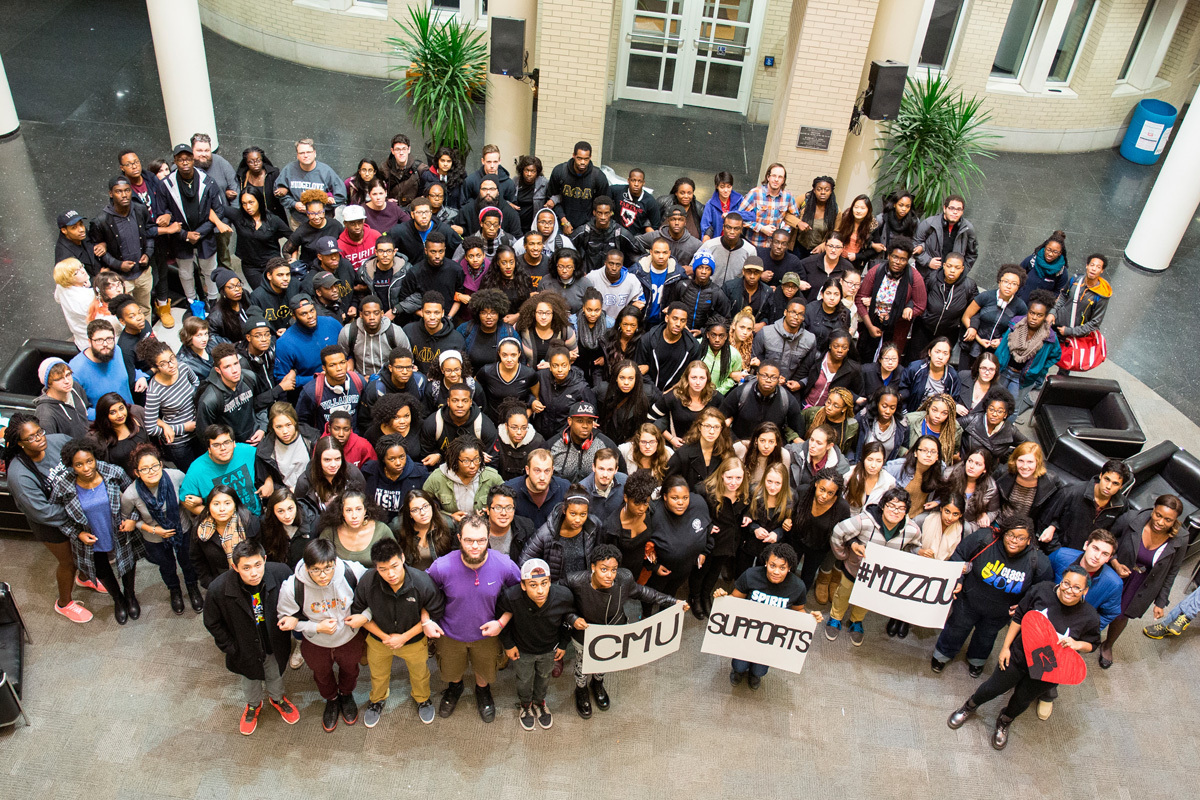 On Wednesday night, students from Carnegie Mellon and the University of Pittsburgh gathered to show solidarity for the students of the University of Missouri. “The fact that someone can feel comfortable enough to say that they would go around shooting black people: it hit somewhere close to me personally,” senior mechanical engineering major Kayode Dansalami said. “Because that could happen to me. And it’s strange to think that I can’t feel safe on campus, going to class.” (credit: Brandon Hong/)

The event came only hours after two students at the University of Missouri were arrested for making threats against black students on the state university’s flagship Columbia campus. According to the Associated Press, University of Missouri students Connor Stottlemyre and Hunter Park were arrested separately for posting explicitly violent, racially charged messages to the anonymous app Yik Yak. Stottlemyer wrote, “I’m going to shoot any black people tomorrow, so be ready,” contributing to a maelstrom of racial tension on the Missouri campus.

The protests at the University of Missouri have resonated with students at Carnegie Mellon. “The fact that someone can feel comfortable enough to say that they would go around shooting black people: It hit somewhere close to me personally,” senior mechanical engineering major Kayode Dansalami said. “Because that could happen to me. And it’s strange to think that I can’t feel safe on campus, going to class.” Dansalami helped organize the assembly as part of Spirit, a campus organization for fostering a sense of black community and championing black awareness.

During Wednesday’s demonstration, Carnegie Mellon and University of Pittsburgh students instead showed solidarity with students at the University of Missouri. “We came up with this idea when we thought, ‘We should do something to show our support,” said Mattie Hedgebeth, a senior psychology major and one of the organizers of Wednesday’s event.

Hedgebeth, who serves as the black awareness chair of Spirit, said that the event came together quickly with the help of a social media push and a Facebook event made only a few hours before the 9 p.m. gathering. “With the miracle of social media, we were able to get all of these people from all of these different places to come,” she said.

Members of Spirit also worked with the University of Pittsburgh’s Black Action Society, drawing a wide array of students from both schools.

At the event, students posed for a picture that they posted on Facebook and intend to send to student activists at the University of Missouri. “We want to show our support. We can’t be there, but we want to help,” Hedgebeth said.

A member of Carnegie Mellon’s Graduate Student Assembly also spoke at the gathering to show his support for Jonathan Butler, a graduate student at the University of Missouri who embarked on a hunger strike that lasted for eight days on the condition of the removal of the university’s president.

M. Shernell Smith, assistant director of Student Affairs and and housefellow of the Intersection, emphasized a need for a campus conversation that leads to tangible action. “I think what’s happening at Mizzou and Yale and all these other places is that people are asking, ‘So what are some things we can do together — not just talking about, but actually happening,’ ” Smith said. “What I appreciate is the fact that you can tell that there is work to be done, and there is work to be done here at Carnegie Mellon.”