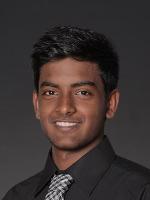 Alla has become a leader for the men's soccer team. (credit: CMU Athletics)

A leader on the Carnegie Mellon men’s tennis team, senior Abishek Alla feels that playing for the tennis team gives him an outlet for competition outside of the class. The civil and environmental engineering major from Hyderabad, India has showcased dominant play over the last couple years, competed as the Tartan’s number one singles player for the past two seasons, and been named an All-American in singles both years.

When discussing his choice to participate with the team, he called attention to the break tennis provides from a day full of academic activities. Alla embraces his participation in tennis for the sheer enjoyment of being on top of the sport’s competition.

“I’m playing more seriously only because that’s a release from academics and it’s more to fun to be on the court than to be somewhere else,” said Alla.

In high school, Alla competed at a sports academy where athletics was a focus. Coming to Carnegie Mellon was a big change, but luckily he made the adjustment successfully.

“I came in prepared for [school] to be harder and then I guess it started going off well the first few weeks, and then it just kept going that way.”

Entering school at Carnegie Mellon poses challenges for many first-year students unfamiliar with the workload, and Alla noted that this makes it especially difficult for athletes at the university to balance their time well.

Late in the season, he pointed out, there is importance in “staying on top of all the academics so it doesn’t affect the playing in UAAs [the University Athletics Association Conference Championships]”.
However, he also observed that the impact of sports can be a great positive force on the athletes in season. When in season, athletes learn to do work efficiently for their classes, using time outside of practice better while operating under the added time pressure.

“I couldn’t see myself not playing. If I wasn’t playing tennis I feel like I’d have a lot of free time,” Alla said. Alla explained that since tennis teaches the players about “unconsciously finishing work,” when they aren’t playing; there is a lot of free time.

This makes a good lesson for the younger athletes, since, Alla said, the younger members of the team are still learning to manage the different academic load and find balance with other activities. Alla sees losing sleep as the big pitfall to a student athlete looking to succeed in school and in tennis.

He advises that “if you’re spending too much time on a problem you should just go to the TA [teaching assistant] and ask for help or just email someone instead of staying up for 12 hours doing it on your own.”

Successfully adjusting to the academic workload will be key for the tennis team this season, with a strong first-year presence on the team that’s sure to be large part of the winning formula.

Alla explains that a strong work ethic from the first-years on the team this season is making up for the loss of three of last years seniors from the varsity team and giving the team a chance to “make history.”
Alla views this weekend’s upcoming ITA regional tournament in Fredericksburg Virginia as a good test of how both he and the team stack up competitively against the competition. In the singles tournament, he expects strong competition, both with rival tennis players, like a strong player from John’s Hopkins University who Alla believes is likely to take the top seed in the draw, and with teammates. He anticipates many of the tough matches to come against other strong Carnegie Mellon tennis players who will also play in the tournament.

In addition to being able to cope with added academic responsibility, Alla explains the significance of the coaching staff in allowing the tennis players from both the men’s and women’s teams to train efficiently through the season. The tennis coaching staff must deal with limited court openings throughout the day, needing to organize times for all athletes on both tennis teams to take advantage of the courts closed to public use during the day.

On the whole, Alla’s experience handling tennis along with a typical student workload helps him succeed both on and off the court.