Warm yourself with autumnal comfort food 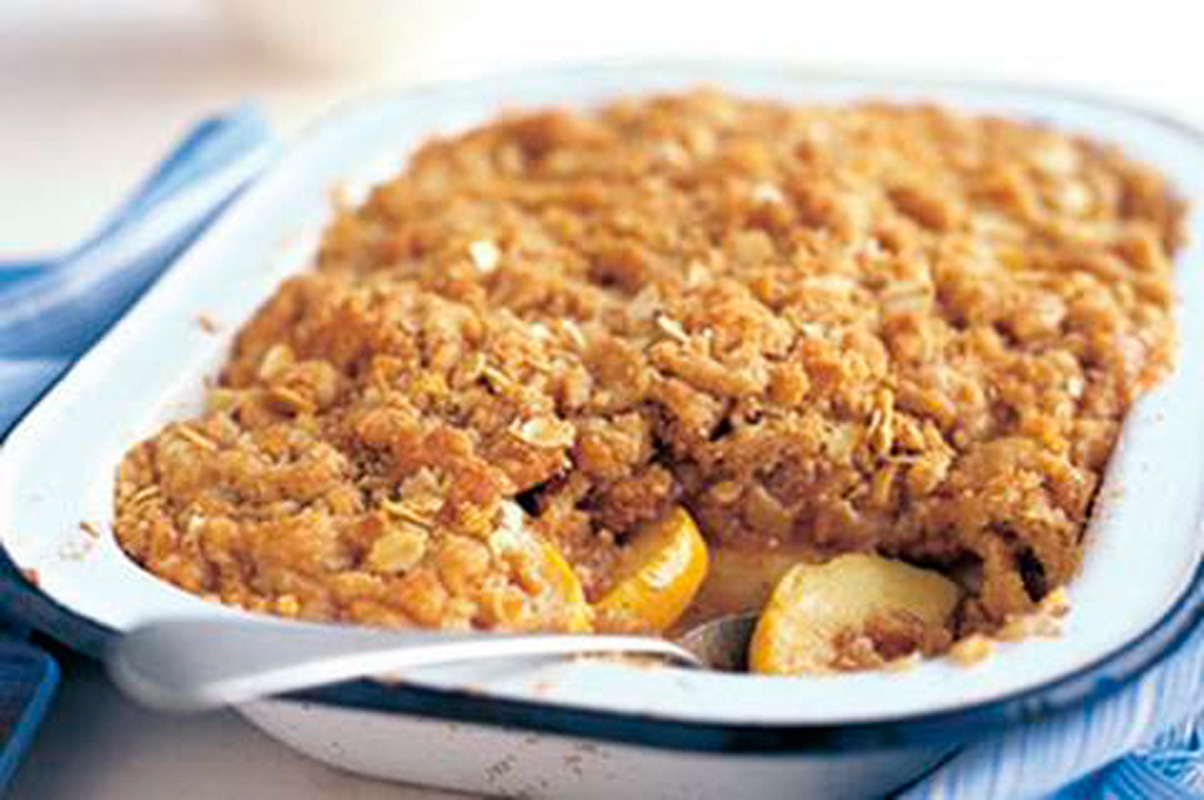 Warm apple crumble is an easy and delicious way to get your fruit serving for the day, albeit with a side of butter. (credit: Courtesy of Flickr Creative Commons)

Sure, barbecues are fun and snow cones are delicious, but the best season for food is definitely autumn. It's easy to feel a little down when the days become cold and rainy, and when every time you come home you have to throw your socks in the dryer, but a bad day can quickly become a good one with delicious food. Here are a few easy recipes to include in a warm meal filled with comfort food, fit for a miserable, homework-filled day.

I love soup more than I love people. Most of the time. Soup is often easy to make and it can last you a while. I fell in love with this soup after eating a variation of it at Eat Unique once last fall. While the first few times were only okay, I eventually mastered this recipe and now make it as often as I can.

I originally found this recipe on Food.com, but I do make some alterations to the ingredients above. I'm a little more generous with salt and pepper, and I'm more conservative with the nutmeg — especially after a nutmeg overload, which was not delicious. I also use fresh pears, because I feel like they'd be tastier. I try to buy them as ripe as I can find. While this leads to no pear syrup, I poach the pears in apple cider to give them a bit of an extra fall flair. Then I use a little apple cider, a half cup or so, as the "pear syrup."

First, melt the butter with the leeks and onions in a big saucepan. When they are nearly cooked, add the flour for just a minute or so, and then add all the chicken broth. Cook on medium heat for a while, until the broth begins to boil. Add in the pumpkin, vanilla, salt, pepper, and nutmeg. When the soup begins to boil again, turn down the heat and cover for about 20 minutes. While it is simmering, poach the pears. This means dissolving the sugar into the apple cider in the pan, adding the pears — I do three to four halves — and then cooking at a low boil for about 20 minutes as well. Since this is the same amount of time as the soup itself, it is good to already have the sugar and apple cider heating on a back burner.

When the pears are tender, transfer them to the soup. I also add about half a cup of the apple cider. It is easiest to blend the soup if you own a hand blender, but you can also put it in a food processor or blender in four different batches. After it is blended to a smooth consistency, add the cream and a little more vanilla, as well as more salt and pepper if desired.

Enjoy your soup! This recipe can feed generous portions to around four people, so invite your friends over and feel less alone.

Fall is also apple season, one of the best fruits to grace the earth. While this dessert tastes best after you make it after a long day of apple picking, you can also make it using store bought apples. Apple crumble is one of the best things to make, because it is really, really difficult to mess up. Crumble of any consistency tastes great, and the more butter used, the tastier it seems. So while I give measurements here, most of the time I just mush it around until it feels right, and I have yet to be disappointed.

Preheat the oven to 350 degrees F. The first task after that is the most boring: peeling and chopping the apples. Try to have a vegetable peeler on hand; it is so much easier than a knife. Put the apples in 9x13 baking dish; Pyrex is by far the best. Toss the apples with the white sugar, 1/2 teaspoon of the cinnamon, the juice from the lemon, and the flour. Put the wonderful smelling apple compote aside.

In another bowl, mix the butter, one cup flour, oatmeal, brown sugar, one teaspoon cinnamon, and pinch of salt. It is most effective if the butter is thoroughly thawed, and if you use your fingers. When the mixture is the consistency you desire — reminder: it will be delicious regardless — sprinkle or spread it on top of the apple mixture. Pop the tray in the oven for about 45 minutes, or until it is bubbly and sweet-smelling. Serve with vanilla ice cream if you so desire.

With these two recipes, hopefully you can improve a chilly fall day. Other fun recipes to join your soup and apple dessert might be gooey homemade mac & cheese, kale and white bean ragout, and maybe freshly baked banana bread.