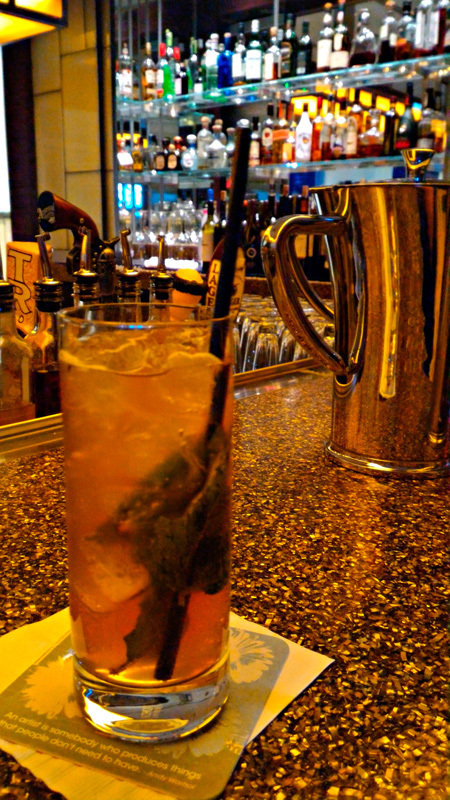 Named after Andrew Carnegie — or Andy Warhol, or both, it’s never been made quite clear — Andy’s Wine Bar in downtown Pittsburgh is a bar with a modern, cosmopolitan aesthetic, located in the lobby of the Fairmont Pittsburgh on Market Street.

Featuring dark countertops with gold shavings, retro lounge chairs, and window-side two-tops with tall royal blue swivel seats, Andy’s radiates “swank” in every inch of its decor. Wednesday to Saturday nights, a live jazz band performs in the bar, for an extra touch of class. “Jazz at Andy’s” is open to the public and free of charge, and features local jazz performers such as Dane Vannatter, Tania Grubbs, and Trudy Holler. The band is right there in the lobby at ground level, and you can literally sit right beside the performers as they are performing. The intimate setting is ideal for anyone who is a fan of jazz, and the lobby of the hotel offers wonderful acoustics for pleasurable listening. However, if you are completely uncultured like me and know next to nothing about jazz, the bar also offers other treats as well, namely lots of alcohol.

Despite being marketed as a wine bar, wine is hardly the main selling point at Andy’s; the wine menu is relatively limited and what is available seems somewhat overpriced. However, the bar does offer a mix of interesting cocktails which start at $9 and up, and includes some interesting items such as the Thai Vesper, which is a Beefeater 24 gin with coconut Lilette Blanc, the Bacon Shrub, a bacon infused Maker's Mark, and a seasonal warm spiced wine, a cinnamon and orange cabarnet with butternut puree.

I got the Peach Ancho Mojito made with Mount Gay rum, while my friend ordered the Meal Undone, a Belvedere vodka infused with ginger. The cocktails are flavorful and punchy, and the menu seems to change up often, so there should be some new concoctions to try within a few weeks or so. What’s more, each order of drink comes with a colorful little Warhol-style coaster that has the face of Andrew Carnegie on one side. The quest to collect free stuff with Andrew Carnegie’s face on it is never complete.

The food menu also contains some interesting items. It includes small appetizers and desserts such as pierogies, cheeses, and espresso ice cream, as well as some burgers, sliders, and salads. I ordered some very nice lamb sliders, which came with feta cheese, beets, and Tahini sauce. However, in general the appetizers and desserts seem to be somewhat more inventive and exciting than the entrees, so I would stick with those. The food service was also pretty slow; I waited over 25 minutes for my sliders at a time when the bar was only about half full.

Unfortunately, the offerings at Andy’s do run a bit pricey, especially for a broke college student. It’s perhaps for this reason, and the fact that it is located downtown, that the crowd at Andy’s seems to be mostly over 30. During the early evening, there are a number of working professionals in suits and ties leaving work to get a drink, and those are about the youngest people you will find there throughout the night. It can be charming to see a couple or two waltzing around in an open space while the jazz band plays in the background every now and then, but the sheer number of the older patrons after 10 p.m. or so can make a 20-something feel rather out of place.

Still, if you don’t mind hanging around with people who may be your parent’s age, or if you’re a fan of jazz or fine cocktails, Andy’s is a nice place to relax after a long week, especially before the bar becomes too full. It has a wonderful, classy ambiance and is located in a beautiful area of downtown with many good restaurants nearby, such as Meat & Potatoes and Primanti Brothers. Also, if the cocktails run a bit expensive, there are also a selection of beers that can go for around $2 during Happy Hour times. Their October Performance Schedule is posted on their website, for anyone interested in seeing local performers.