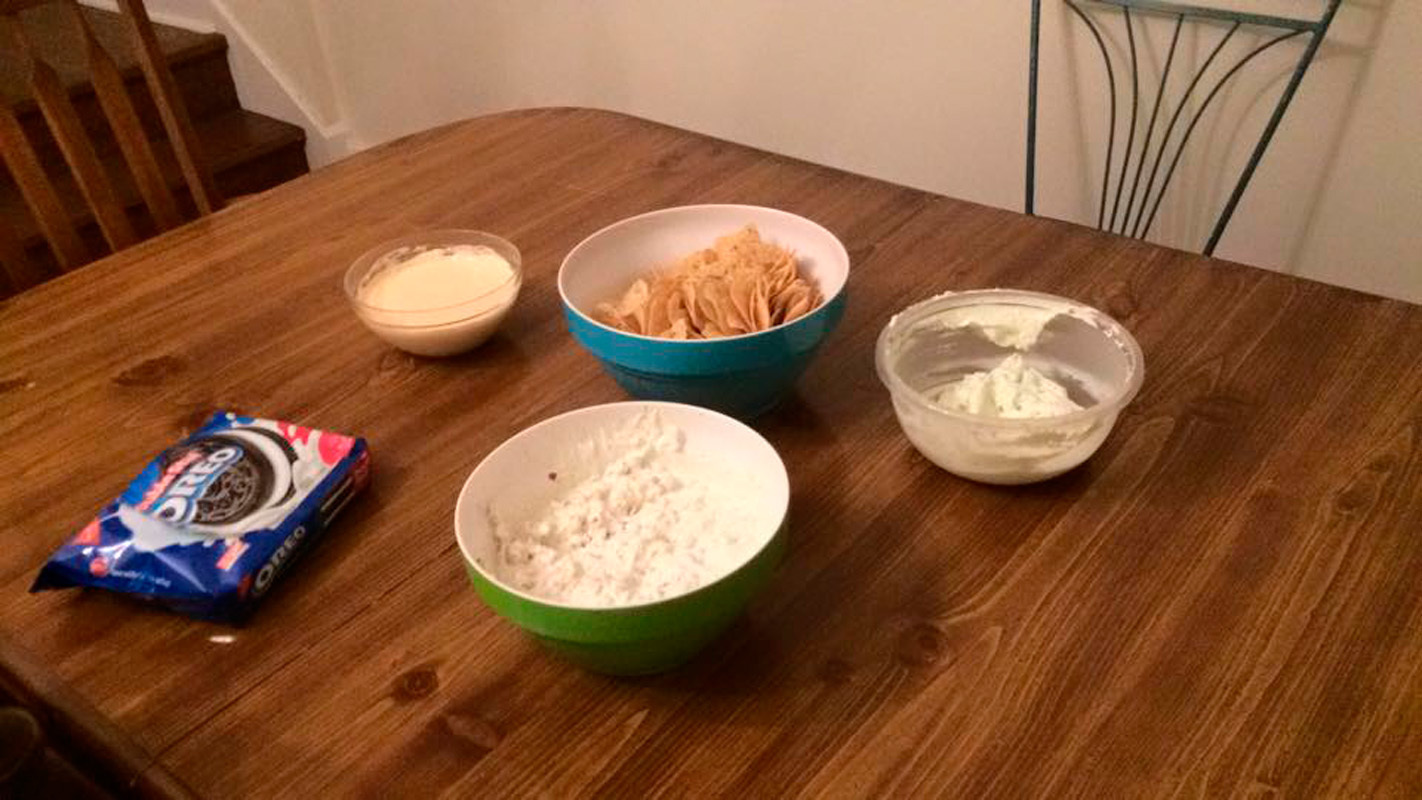 Cookies and other snacks can complement the dip and chips at your social gathering. (credit: Sarah Gutekunst/Operations Manager)

I’m of the firm belief that a solid offering of snacks has the potential to elevate an awkward red Solo cup “rager” to a nice cozy evening with friends. That’s why when I throw a party, I like to put out some noms. It shows friends that you care about their experience in your home, and it’s always good to put food in the tummies of the people who hold the fate of your furniture in their hands.

An assortment of dips is a really great way to feed guests. It’s more effort than simply putting out a few bags of chips, but it’s way more delicious. A simple Pinterest search is enough to show you the mouth-watering range of dips out there, from savory to sweet, from a simple three-ingredient delight to a complicated layered delicacy, depending on your budget and time constraints.

But with these three dips that I made for my birthday party, I didn’t have to spend that much money and I pulled them all together in the hour before the party began. They were super delicious and very easy! I opted for all savory because that’s what I like to eat, and it was my party. It was also great that all of them were served with tortilla chips, so that made life simple.

The first is an avocado dip that’s actually not guacamole. It’s a creamier spin on the universally adored classic. By adding cream cheese and sour cream, it fluffs up the dip and gives it a deeper flavor. Plus that’s volume that doesn’t come from avocados, and that equals money saved! Unfortunately the avocados that I bought were horrifically underripe, so I have faith that this recipe will yield something better than what I made.

This recipe is much easier if you have an electric mixer, which I do thanks to my beautiful grandmother. If you don’t, I’m so sorry because the first step, creaming the cream cheese, requires serious shoulder and tricep muscles to do by hand. Follow that up by mixing in the sour cream and garlic powder and don’t stop until it’s fluffy. Then beat in the avocado until it’s combined with the creamy love pillow. Finally, hand stir the onions and lime juice. I personally chose to stir in a couple teaspoons of salt, too, but you can do that to taste.

Buzzfeed recommended using Corona, but I happened to already have some really high quality month old Keystone Light on hand. The dip still turned out delicious in spite of it. Start by bringing the beer to a simmer over medium heat in a small sauce pan. It will get really fun and foamy, and that’s how you know it’s time to add the cream cheese. The best way to go about this is to soften the cream cheese beforehand, and cut it up into chunks so that it melts smoothly. Once that’s melted and mixed up, pour in the cheddar and stir until it’s a dip. If you’re feeling fancy, which I was not, a sprinkling of chopped green onions would be a delicious finishing touch.

The only small issue with this one is that it’s not ideal for leaving out on a table all night. It’s so delicious hot, but so weird and congealed after two hours. Either serve it immediately, serve it in a crock pot, or periodically microwave it.

Pour everything in a bowl and stir! It’s literally as easy as that, adding to my sincere love for this dip. It was also the first one to completely disappear, much to my despair. I need to add that I could truly eat this for breakfast, lunch, mid-afternoon snack, dinner, and late-night snack until my digestive system fails. It was to die for in every way. The mixture of the ranch seasoning with the acidity of the tomatoes, the sweetness of the corn and general perfection of cheddar hit all my sweet spots. The only thing that could have made it better was maybe some ground beef, which I will likely try as early as tonight because the craving is overwhelming.

I also ended up adding a box of Oreos to the mix, just in case any guests came with a sweet tooth. The whole spread made the evening so much nicer than it could have been without, and everyone who came did express their appreciation. Seeing friends leave happy is a beautiful birthday gift in itself.