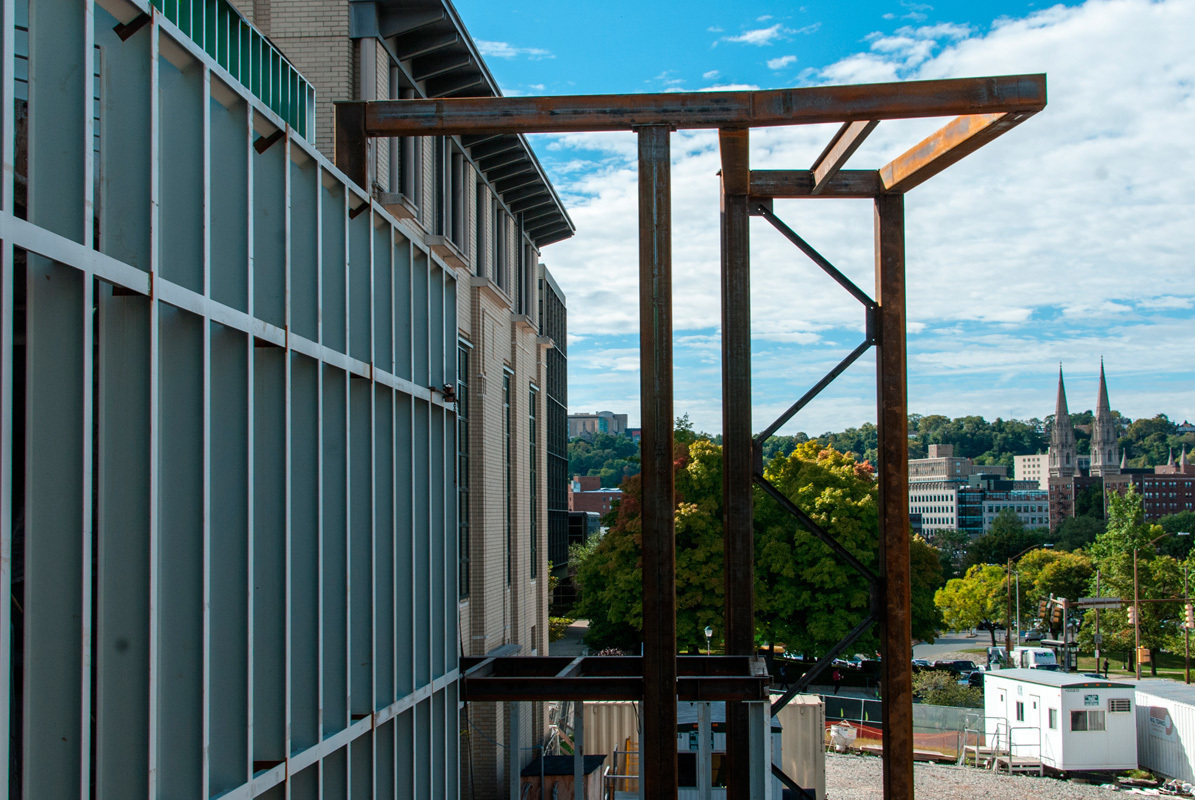 On Thursday, The Tartan was given a behind-the-scenes tour of the Jared L. Cohon University Center expansion construction site. Set to open in May of 2016, the new portion of the building will include a state-of-the-art performance theater, a high-security athletic facility, and perhaps most notable of all, a focal point for the Forbes entrance to the university.

The base project, costing about $22 million, is a result of years of careful planning, fundraising, and an effort to expand the athletics program at Carnegie Mellon, according to Adam Homer, the campus design and facility development project manager for the CUC expansion, who led portions of the tour. The tour was focused on the athletic facilities, the theater, the campus entry point, and the third floor space.

Assistant Director of Athletics, Recreational Programming Sara Gauntner was also present during the tour, and emphasized how long-awaited the improved athletic facilities are. “We’ve tried to plan out a one-stop-shop for athletic needs on campus,” she said, acknowledging that between Skibo Gymnasium and the CUC weight rooms, the current facilities are not meeting the existing needs.

The Forbes-facing portion of the first floor will offer strength training with heavy weights, similar to the weight room in Skibo Gym. One side of the room will cater to heavy lifters, while the other will allow for lighter, less strenuous weightlifting. Paneled by glass walls and six skylights, the first floor will fully utilize natural light for the convenience of the users. Further back, students will have access to 180 new rental lockers, two unisex family changing rooms, spacious male and female locker rooms, and private showers. On the second floor, there are four multipurpose rooms designated for various fitness classes, in addition to a cycling room, and, overlooking the weight room, a cardio-machine space that has a wall of windows looking out to Forbes. Swimmers will also have larger team rooms and physical education instructors will now have classrooms in which to teach.

Director of Student Activities Liz Vaughan said that the flexibility of the spaces was a priority during the expansion planning process. “With more spaces, we can offer more classes. [Students] will be able to find the class that they want to take at a time that is convenient for them.”

The spine of the athletic center will run from the reception desk to the back wall of the building. For security purposes, access to all facilities will require students to swipe their Carnegie Mellon ID, similar to the turnstiles near the pool and current locker rooms.
The CUC expansion is part of a three-phase plan to re-imagine athletics and recreation at Carnegie Mellon, Gauntner said. “I’ve been lucky to be around for two of the three phases during my time here.” The next part, she said, involves slowly shutting down Skibo Gymnasium and repurposing the space.

The first floor’s key attraction is the studio theater. The theater was built to serve the needs of the many student groups on campus, and as such, has a variety of specifications that will allow it to suit these needs. The floor of the theater will be fitted with heavy-sprung padding to protect the dancers who will use it, from Bhangra to Dancer’s Symposium. The wall of mirrors on one side of the theater is also geared toward making rehearsals easier for such groups.

The acoustic properties of the theater will make it ideal for musical groups, such as the All University Orchestra or the Kiltie Band, to practice. The walls are insulated with six inches of foam for maximum noise canceling, as well as multiple layers of thicker drywall and space between the layers that will make the room virtually soundproof, according to Homer.

The theater offers many options for the staging and direction of productions, so that sets can be positioned in virtually any way. Telescopic seating for 140 can be pulled out from the wall as far as the groups need it to be, or groups will also be able to take chairs from the roomy storage areas surrounding the theater to create an in-the-round theater experience, said Vaughan.

A balcony with extension cables allows performance technology to be set up from any angle, and sets that are constructed in the theater can be stored in the rooms on the other side of the walls. A green room will serve as a changing area for dancers or performers, which Vaughan says will make performing in this theater easier than performing in the current CUC facilities and eliminate the need for performers and patrons to share bathrooms.

According to Mandi Semple, director of marketing for student affairs operations, the main entrance to the CUC expansion will face Forbes, and finally offer a real “front” of campus. The CUC expansion project and the new Tepper Quadrangle will both play into the idea of changing the way that the university interacts with Forbes Avenue, according to Vaughan, as well as acting as a stronger entry point for visitors. “We all saw people walk out of the old parking garage and looking around and getting lost because it was so unclear where they were supposed to go. Now, they will walk down a sidewalk and walk right into the new expansion.”

Once inside, visitors will be greeted by a large lobby meant to function similarly to the CUC’s current black chairs common space. An alumni-donated Dale Chihuly sculpture will hang overhead against a large, two-floor mural behind the main staircase. The designers have planned to create rain gardens outside, which will complement the 62,000 square feet of the building’s glass and zinc exterior and will also serve to separate the building from the noise and traffic on Forbes Avenue.

As many community members will remember, the design of the CUC yielded an extra 4,559 square feet of space that was dubbed the “shell space” last year. Purchased by the Undergraduate Student Senate and the Graduate Student Assembly (GSA), the space is divided and designated into 3,025 square feet and 1,534 square feet zones for each group, respectively. The rooms will serve as collaborative space for both bodies of students. According to Vaughan, the rooms will have plenty of power outlets, whiteboards, and tables.

This Wednesday, Oct. 7, examples of the tentative furniture selections for both these spaces and the lobby will be available for students to try and talk about in the Kirr Commons in the CUC. The design team and the Carnegie Mellon project coordinators would like to hear furnishing options and design details that best cater to the student body.

The CUC expansion is just one part of a larger effort on behalf of the Carnegie Mellon administration to face-lift the campus and meet the ever-changing demand of students. According to Vaughan, tours of the facility will continue to be offered to a variety of groups over the next few months, particularly the groups of students who have the greatest stake in the new facilities.