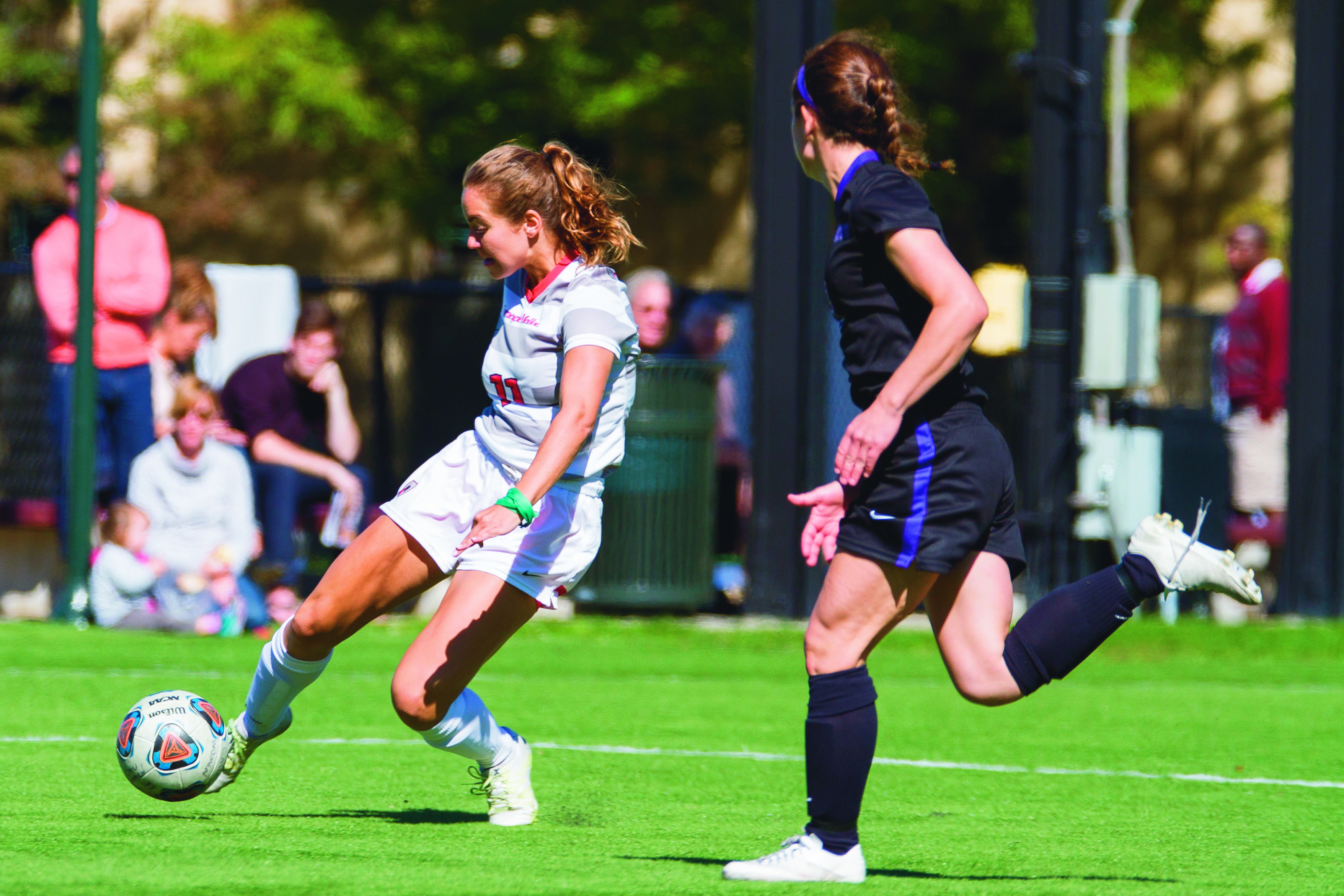 Senior forward Alli McGugan crosses the ball to set up an opportunity for the Tartans. (credit: Staff Photographer)

The Carnegie Mellon women’s soccer team took the field under a cloudless sky on Saturday to face off against the New York University (NYU) Violets. After a 5–1 victory at LaRoche earlier in the week, the Tartans were defending their still undefeated record. The NYU squad had only one loss before this game, but the Tartan women prevailed on their homecoming weekend in a nail-biting, double overtime, 1–0 victory to hand the Violets their second loss of the season, putting the Tartans at a solid 2–0 in conference play.

These teams were very evenly matched coming into this game, and it showed in the opening minutes of the game as each team aggressively traded possession of the ball in an attempt to establish early pressure and set the pace of the game. Carnegie Mellon began to take control of the ball more readily as time progressed, but not without a formidable resistance from the NYU defense. The Violet goalkeeper made multiple crucial saves midway into the first half to prevent the Tartans from gaining much needed momentum. The Tartans continued to put shots on goal, however, and the Violets began to look flustered in their lack of ability to pressure the opponent’s side, even resulting in a yellow card for the visiting side. The lack of ability to score for either team, however, made this game very physical with aggressive slide tackles and defensive positioning from both sides throughout the game. Carnegie Mellon maintained a slight control of the game for the majority of the first half, but not so much that they were able to score. NYU appeared to be playing the Tartan squad closer than any other team had all season.

Carnegie Mellon maintained their characteristic lockdown defense as the game moved into the second half, but NYU would not go down without a fight. With some good positioning, the Violets managed to finally get some pressure onto the Tartans’ side, but did not manage to score thanks to a couple great saves from junior goalkeeper Katie Liston to keep her team in the game. The Tartans managed to regain possession at the end of the second half, putting multiple shots on goal, but every attempt seemed to miss by a small margin. In the waning minutes of the half, NYU began to pressure Carnegie Mellon, and the Tartans were forced to play dangerously close to their own goal until they managed to get the ball across midfield in the final minute and force an offensive break. The Tartans could not manage to make the goal, however, and full time ended in a draw 0–0.

The first overtime carried on much in the same way as the game did in regulation time; each team traded possession of the ball aggressively but the defense of each team seemed to be outshining the offense. Each goalkeeper managed multiple saves in overtime, and it almost looked as if there would be no obvious winner in this contest. Outstanding defensive play from each team kept the game scoreless throughout the entire first overtime, forcing double overtime.

The Tartan women are no strangers to clutch overtime play. The team’s only non–win of the season was a draw against Ohio Northern that was the result of a scoreless double overtime, and the Tartans even pulled out a 3–2 win against Capital in overtime in their closest game of the season up to that point. The Tartan women show up when it matters, and this game was no different. The second overtime period began with each team getting an unsuccessful offensive break and neither team managing to score. Once the Tartans gained possession after the offensive move from the Violets, it became clear who would be the victor. The Tartan women gained possession of the ball and did not give it up until they emerged victorious.

Multiple aggressive pushes from the Tartans finally resulted in the first and only goal of the game in the 103rd minute, as junior defender Amelia Clark touched the ball into the opposite corner of the goal off of a corner kick from sophomore midfielder Tori Iatarola. A crowd of alumni and students alike erupted, and with that goal the Tartans managed their 11th win of the season and their second win in conference play, putting them on a clear path to the playoffs at the end of the season. The Tartan women showed that not only can they dominate opponents of clearly lower skill level, but they can also compete head to head with teams of equal skill and still perform when it matters most. The Tartan women look to continue running the table this Friday, Oct. 16 at home against Rochester University in another conference game to determine their fate in the playoffs, and they don’t plan on losing any time soon.