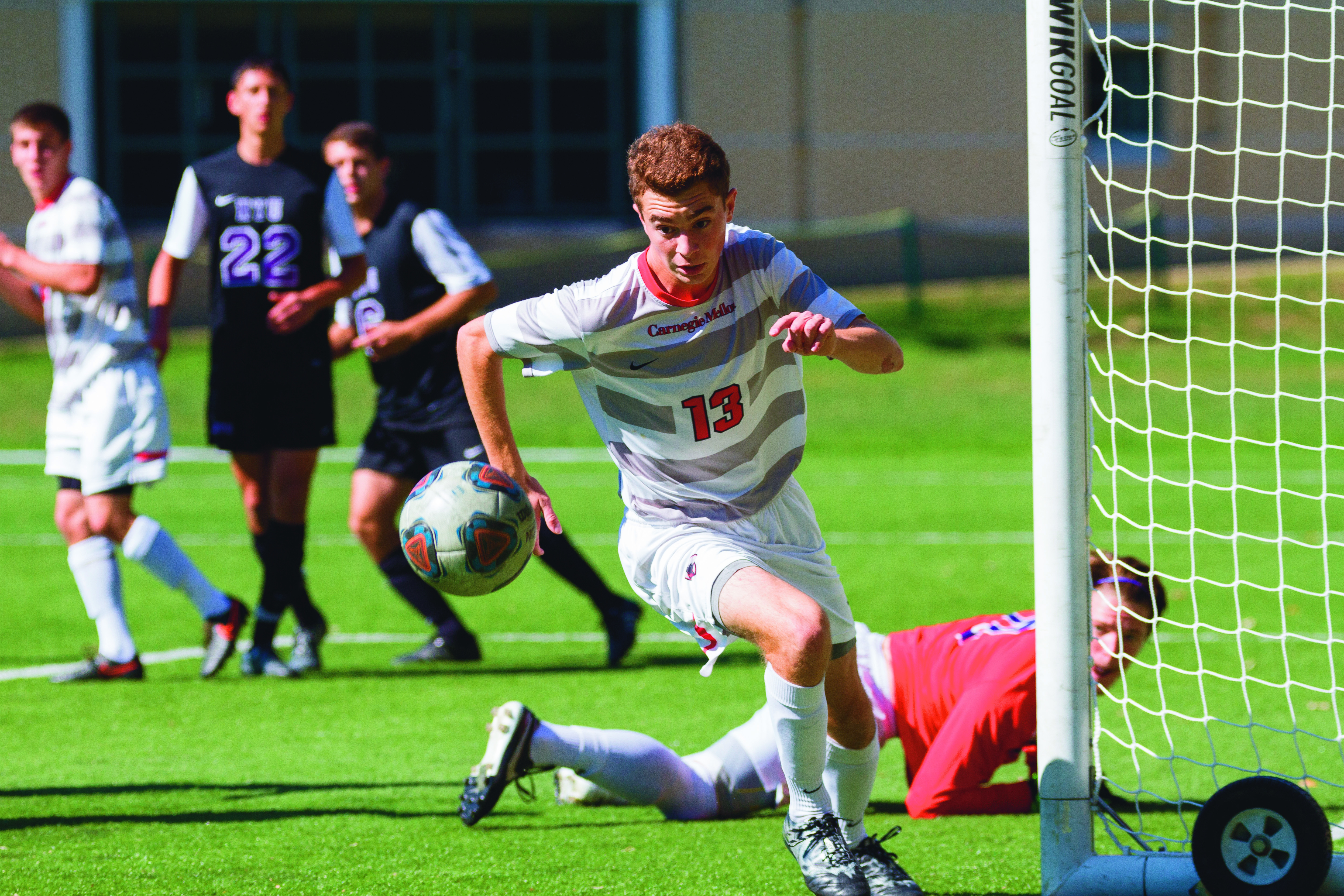 The Carnegie Mellon men’s soccer team competed against New York University (NYU) on Saturday. The largely defensive battle ended in a 1–0 victory for the Tartans, improving their overall record to 8–2–1 and their University Athletic Association (UAA) record to 1–1.

After a delayed start due to the women’s soccer game, the Violets led an aggressive start against the Tartans, earning two free kick attempts within the first five minutes of the game. However, senior goalkeeper Eric Bykowsky diligently blocked both shots, setting the tone for Carnegie Mellon’s defensive unit. The Tartans then took the offensive, setting up five attacks against the NYU defense. However, the NYU goalkeeper was able to match the Tartan attacks, negating the efforts of the offense. The duel between defenses intensified throughout the half until sophomore midfielder Matt De Jesus netted a pass from first-year forward Sean MacPherson into the game’s only goal in the 44th minute. First-year midfielder Anthony Gulli and senior midfielder Jordan Friedlander had put pressure on the Violet goalie, forcing him to save their three shots before De Jesus managed to break through.

At the start of the second half, Carnegie Mellon continued to press their advantage against the Violets, able to keep the ball on NYU’s side of the field for much of the half. Though the Tartans did not score another goal, the team was able to make quite a few attempts, leading to many spectacular saves by the NYU keeper. As the game entered the final 20 minutes, NYU became increasingly aggressive, driving the ball to the Tartans’ side very often in an attempt to take the game into overtime. Though the Violets were able to take a few shots, the Tartan defense kept NYU out of the goal, sealing the victory as time expired. “We fought really hard,” Bykowsky said after the game. “That was the key: fighting to the end.”

The win marks the sixth shutout for the Tartans this season and improves their home record to 5–0–1. More importantly, it has put the Tartans back on track following the loss against Brandeis University. “The win was nice coming off of Brandeis,” Bykowsky said. “We really turned our game around. It was the type of game that we need to continue playing going forward.” Bykowsky expects that the team will continue to face tough challenges from their UAA rivals, but he also believes that the Tartans are on an “upward trajectory,” ready to take on whatever their rivals dish out.

The Tartans will need to remain vigilant as they face their UAA rivals. Of the eight schools in the UAA, including Carnegie Mellon, seven currently have overall winning records. The Tartans currently sit in fourth place behind Emory, Brandeis, and Case Western Reserve. With almost all of their remaining games against UAA rivals, this is the time when the Tartans will need to continue their strong defensive play while also being able to navigate their offense through difficult defensive fronts.

The Tartans will return to action on Friday, Oct. 16 when they host the University of Rochester.