A quick note on the MLB playoffs 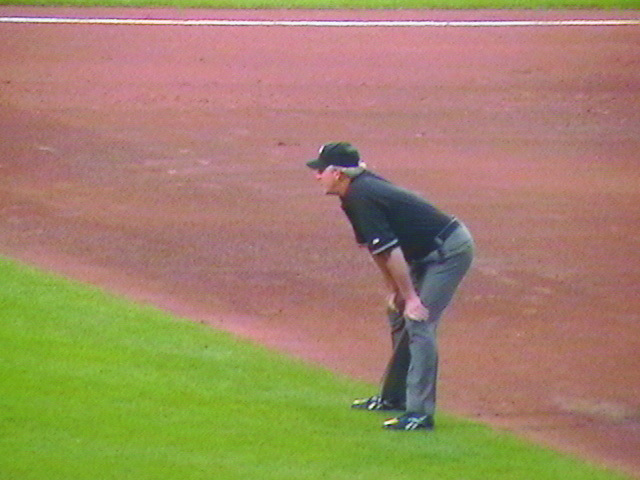 The left field umpire looks on as the play unfolds. (credit: Red Thunder via Wikimedia Commons)

It’s frustrating to see the Pirates stuck in the N.L. Wild Card game for the third time in three years. For the past two years, there has been a real argument that the Pirates were actually the best team in Major League Baseball, yet they lost fantastic seasons in just one game. Last year, it was to World Series hero and possible actual superhero, Giants pitcher Madison Bumgarner. This year, it was to Cubs pitcher Jake Arrieta, who has been continuously improving over the last two years from average starter to destroyer of worlds. This Pirates team — particularly the outfield and the injured shortstop Jung Ho Kang — was incredibly fun and will be sorely missed.

In the A.L. Wild Card Game, the Yankees were kept down by the Astros’ likely Cy Young Winner Dallas Keuchel. Nothing really happened over the course of the entire game, as a homer by outfielder Colby Rasmus effectively ended the game in the second inning. The Yankees were unable to score consistently for the last month of the season, so their winning against Keuchel always seemed hopeless.
The Divisional Round has started with a bang as the favorite, the Toronto Blue Jays, has been put down two games to none at the time of this article. The Blue Jays will need to win three consecutive games to advance, with two of them in Texas against the Rangers. Speaking of the Rangers, while they’re on the brink of the American League Championship Series, they were supposed to be a bad team that lost their best player (pitcher Yu Darvish) to injury. Instead, outfielder Shin-Soo Choo and first baseman Prince Fielder decided it was 2007 and carried the team to a shocking division crown, despite the Mariners, Athletics, and Angels all predicted to field strong clubs this year. Of course, all of those teams missed the playoffs, beaten out by the Rangers and aforementioned Astros.

In a fun bit of trivia, the Cubs, who have not won a World Series since 1908, were predicted to win the 2015 World Series in Back to the Future. They are currently tied with the Cardinals in their series and Arrieta has not pitched yet, so there is certainly hope.

Either way, this was a bizarre season where preseason favorites like the Boston Red Sox, Detroit Tigers, Seattle Mariners, and Washington Nationals were usurped after disappointing seasons that placed them near the bottom of the barrel. Hopefully, an equally unpredictable and exciting postseason is to follow.