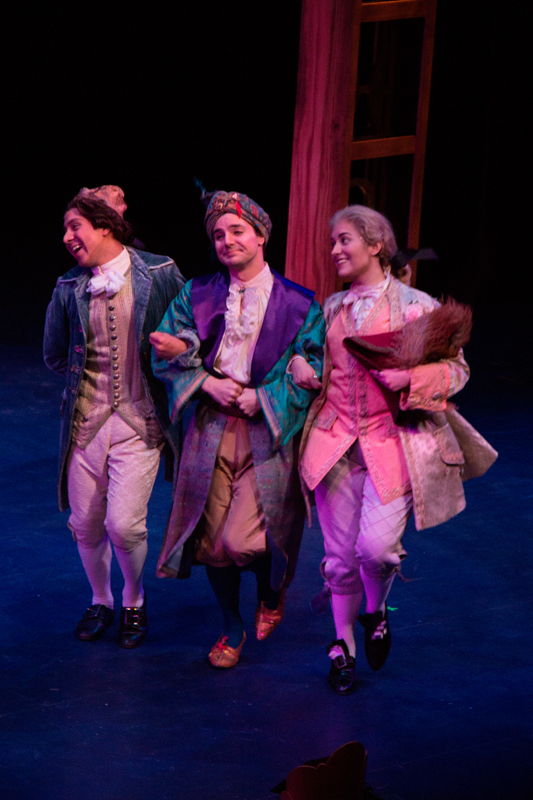 Cecco, Ecclitico, and Ernesto have a wonderful dancing moment as they hatch a plan to trick Signor Buonafede. (credit: José Lopez/Junior Photographer)

This past weekend, students from the School of Music put on a sparkling and hysterical performance of Joseph Haydn’s opera Il mondo della luna. The libretto of the classical opera was written by Carlo Goldoni. The production, which featured the vocal and dramatic talents of Carnegie Mellon vocal performance students, was a ridiculous and enjoyable tale of trickery led by the character of Ecclitico, an astronomer played by master’s student in vocal performance Ricky Marenda. The show had two casts, with each cast performing on alternating days. I attended Friday night’s performance and was hugely impressed by all that I saw.

The curtains opened on a dazzling set with golden pillars made up of stacked astronomical signs and a twinkling backdrop of stars. The men’s chorus — consisting of Ecclitico’s students — joined their teacher in singing a song to the moon. Ecclitico told his students that he could easily convince Signor Buonafede, the father of the girl he loves, that there are people alive on the moon. Sure enough, Buonafede, played by senior vocal performance major Kevin O’Hora, gazes through Ecclitico’s telescope and witnesses what he thinks are people on the moon. In fact, Ecclitico’s students had been acting out a variety of bizarre scenes, including a woman getting dragged away by the nose, behind a screen. Buonafede is convinced, however, and sings a beautiful aria about how perfect life seems on the moon.

Ecclitico, decked out in vibrant astronomer garb, then sang an aria in which he planned to use Ernesto’s money to fund a plan to trick the Signor into letting his two daughters and maidservant marry. Ernesto was gracefully portrayed by master’s student in music Courtney Elvira. Ecclitico loves Clarice, Ernesto loves Flaminia, and Ernesto’s servant, Cecco, played by junior vocal performance major Camilo Estrada, is in love with the maidservant Lisetta. The women were charmingly played by junior vocal performance majors Samantha Kronenfeld, Rachel Doehring, and Shannyn Rinker, respectively. Later in their home, Signor Buonafede’s beautiful daughters sing a duet about how strict their father is. They resolve that though they will still have to answer to a man when married, marriage is preferable to the way they live presently. Doehring weighs the options in a humorous and drawn out way as Kronenfeld joins her in their duet. Ecclitico drugs Signor and, in a particularly wonderfully staged scene, has his students lift the Signor’s chair to convince him that he is flying to the moon. Signor Buonafede and Ecclitico sing a beautiful duet contrasting their desires.

The second act opened with a moon-like set. The men’s chorus, now dressed in bizarre costumes — one of the men was dressed as a pair of pants, another was on roller blades and looked like a shrub — pretended to be people of the moon. Stars were suspended from the ceiling as Signor Buonafede took in the majesty of the moon through song. Throughout the second act, Ecclitico, with the help of Cecco and Ernesto, tricked Signor Buonafede to let his daughters marry each man in turn. Cecco, playing the part of the emperor of the moon, rode in on a large golden duck chariot set-piece. Signor Buonafede’s

hysterical realization that he had been duped included him running around the stage and picking up fake stars with a surprised expression.

Each actor displayed impressive vocal power and precision as well as comic timing, often turning to the audience to deliver a sidelong glance or a salty line. The set, designed by master’s student in scenic design Caitlin Ayer with assistance from junior design major Nathan Brown, not only fit each scene of the show but allowed for funny interactions with the cast, including a cloud that doubled as a scooter, on which Signor Buonafede was pulled around a couple times.

The costumes, particularly during the second act, showed a huge amount of creativity on the part of master’s in costume design student Eunjin Lee. Ernesto’s costume on the moon even had stuffed animals on it, which various characters occasionally pet.

The show closed back on Earth with a celebration. The wonderful accompaniment by School of Music students in the pit orchestra under the direction of guest music director Christopher Larkin made the opera sound incredibly refined and put together. With beautiful sets and costumes and the indisputable vocal talent displayed by the cast, Haydn’s wonderful comic opera was given light and life that won’t soon be forgotten.